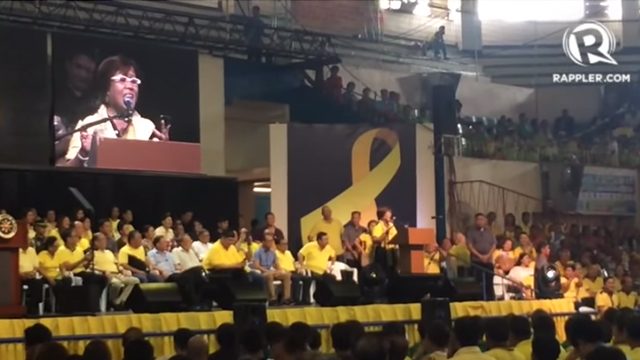 MANILA, Philippines – Making good on her promise to announce on her birthday her political plans for 2016, Justice Secretary Leila de Lima said on Thursday, August 27, said she is ready to embark on another form of public service.

That was the closest that De Lima got to a confirming her senatorial bid Thursday, saying she did not want to preempt the official announcement that President Benigno Aquino III and Liberal Party (LP) standard-bearer Manuel Roxas II.

However, on Monday, August 24, De Lima already joined the President and Roxas in a “Gathering of Friends” organized by the Liberal Party in Cebu.

She said she will resign from the Cabinet once she files her certificate of candidacy. That will be in mid-October.

In July, De Lima said that one thing that kept her from finalizing his decision, despite feelers sent to her by officials of the LP and other groups, was that she was wary of the pressure and the expected mudslinging once she enters the political arena.

(I am still gauging myself if I can enter the world of politics because I am not used to it. Well, I can handle the work, but the environment itself, I would not know if I’m cut out for it.)

De Lima was an election lawyer before she served as chairperson of the Commission on Human Rights, then as secretary of the Department of Justice.

Before De Lima confirmed her plans, however, groups had been publicly pushing her to run.

While she was aware of the efforts of these groups, she said she didn’t have a hand in them.

“I’m aware of their activities, but I’m not involved in them. Those are purely initiatives of volunteers, some of whom I know – friends, sorority sisters – and some I do not know,” she said in a mix of English and Filipino. – Rappler.com