Aug 27, 2015 6:05 PM PHT
Facebook Twitter Copy URL
Copied
Among those present is Liberal Party stalwart and Pasig congressman Roman Romulo, who says he only dropped by to 'greet' a colleague 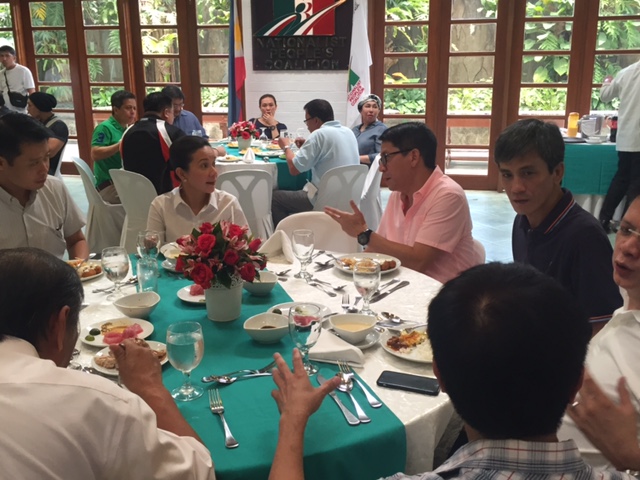 The meeting was attended by local city officials and other representatives who failed to attend past fellowships – the first with members from Luzon; the second, from the Visayas and Mindanao.

Pasig City Representative Roman Romulo, a Liberal Party (LP) stalwart who is said to be eyeing a Senate seat in 2016, was present.

He explained that he was only there to “greet” NPC member and Batangas Representative Mark Llandro Mendoza, who celebrated his birthday.

Romulo and Poe were seated next to each other and were seen chatting. But he said there were no political talks, even as he admitted he is “considering” running for the senate next year.

But Romulo did not directly answer if he would stick with the ruling party.

(I’m with LP. Well, for now, especially that we have budget hearings, it is important for us to get together, politics is not yet discussed even in the House of Representatives. All of us are focused on the budget’s passage.)

Bayan Muna Representative Neri Colmenares, who is “seriously considering” running for a Senate seat, was also present in the NPC meeting.

Colmenares said he is “definitely” not joining the LP slate, as they have stark differences in platform.

Colmenares admitted he is in need of campaign support from political parties and that he is in continuous talks with the NPC, the second biggest party in the country.

The Makabayan coalition is set to have a meeting end of August to decide on its next political moves. The group coalesced with former Senate President Manuel Villar’s Nacionalista Party in 2010.

Gatchalian was present in the event but refused to grant any interview.

He was formerly associated with Vice President Jejomar Binay but talks are rife he has left the Binay camp.

While he has not openly declared his candidacy, Gatchalian already aired his advertisements on radio and television and has his own website and social media accounts. – Rappler.com