Roxas: ‘Possible’ for Leni Robredo to be running mate 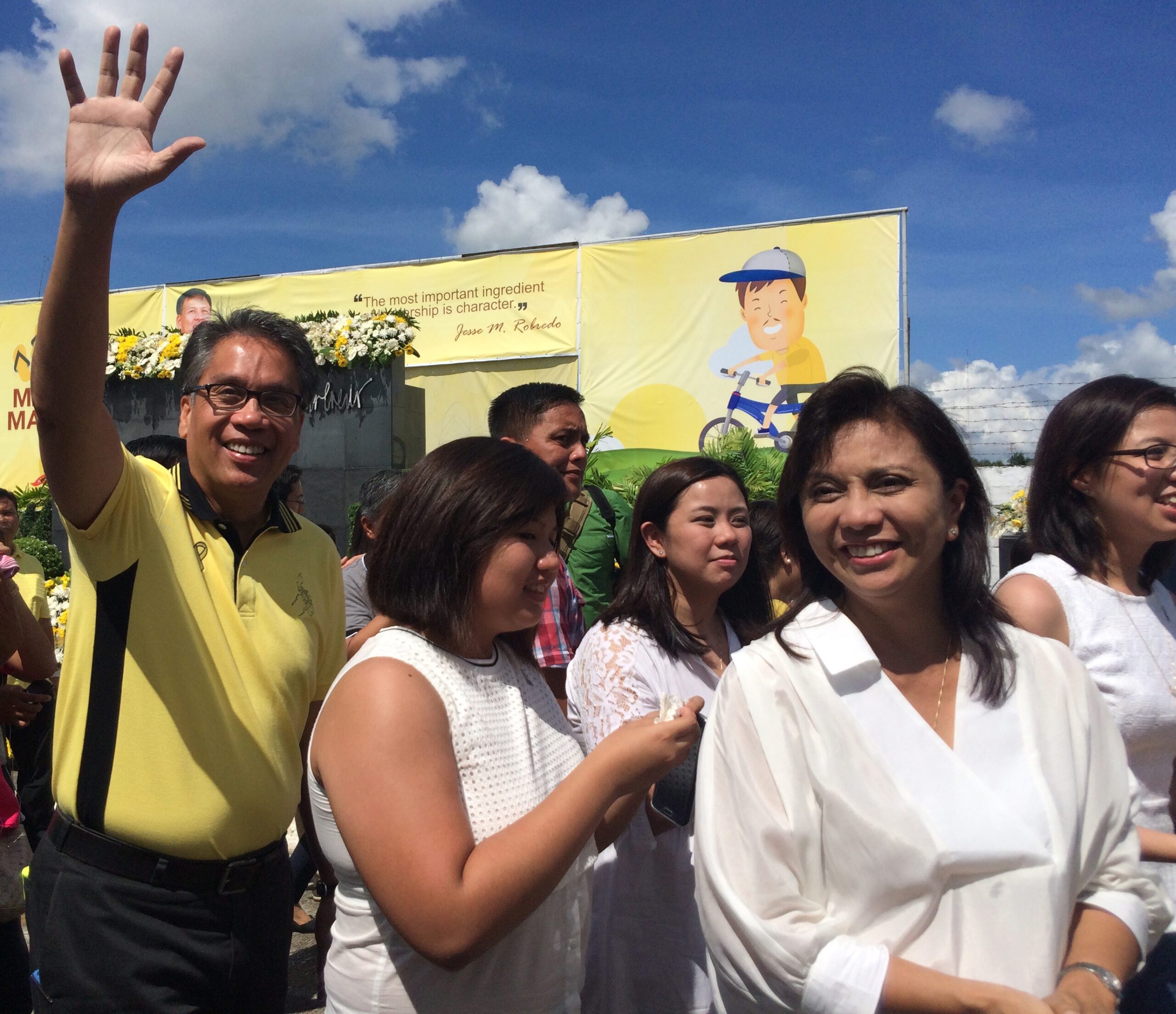 Roxas dodged the question in a chance interview with reporters on Monday, September 7, but was more categorical when asked if another neophyte legislator, Camarines Sur Representative Leni Robredo was also being eyed as his running mate.

“There is that possibility, of course, that Cong Leni will be the running mate,” Roxas told reporters.

The Camarines Sur representative, the widow of former Interior Secretary Jesse Robredo, has long been said to be among Roxas and the ruling Liberal Party (LP)’s top choice for vice president. (READ: Who will be Mar Roxas’ VP? List: Poe, Robredo, Cayetano)

Robredo, a lawyer prior to bagging her seat in Congress, is “qualified” to run for the second highest elected post in the country, said Roxas.

“She has the experience, she’s a lawyer. When she was a lawyer, she didn’t use her knowledge to represent companies. Instead, she helped people from Naga and she was a lawyer for the poor, those who could not afford legal representation. When it comes to helping our countrymen, her track record is well established,” said Roxas of Robredo.

But Robredo, it seems, is still not convinced. “The vice presidency is not an option for me,” said Robredo in a text message to Rappler.

The first-time legislator earlier dismissed a possible vice presidential run, pointing out it was “too soon” for her. She said she is either eyeing re-election or a Senate run.

There is clamor for her, however, to run for vice president. A group composed of administration supporters and LP-allied politicians earlier launched a campaign to convince Robredo to change her mind. On Tuesday, September 8, the group is set to launch a “one million signatures” campaign in hopes of convincing Robredo to run.

Moving on from Poe?

Top officials from the Liberal Party, including party vice chairman and Senate President Franklin Drilon, had earlier called on the party to forget Poe as vice president since she is “already a candidate for president.”

Poe has been visiting vote-rich provinces in the country, speaking about her platform should she run for president in 2016.

No less than President Benigno Aquino III led the very public wooing of Poe, whom he met several times in the past few months. Roxas last met mid-August, where Roxas formally made his offer for her to run as his vice president.

They have not met again since.

When asked if he had officially given up on Poe as well, Roxas gave a cryptic answer. “Our countrymen can expect a strong ticket for ‘Daang Matuwid.’ But more importantly, they can expect a tandem that strongly believes in ‘Daang Matuwid,’” said Roxas.

“Daang Matuwid” is the administration’s tagline for its transparency, anti-corruption, and good governance campaign. Roxas’ 2016 run is also hinged on the idea of continuity of the reforms started by the Aquino administration.

The LP’s National Executive Council (NECO) has yet to convene to discuss the search for Roxas’ running mate, LP acting president and Transportation Secretary Joseph Emilio Abaya said in a text message to Rappler.

“The NECO will be convened at the right time. That is the formal process,” he said.

Informal discussions among LP members and allies, however, have already begun. “We have regular meetings, consultations. I met with the President yesterday on a number of matters,” said Roxas, when asked if LP members have been discussing the search for a vice presidential bet.

Both Roxas and Aquino are “happy” with how discussions are going so far, said the interior chief without going into specifics. Aside from Robredo, Batangas Governor Vilma Santos-Recto and Senators Antonio Trillanes IV and Alan Peter Cayetano of the Nacionalista Party are supposedly also being eyed as Roxas’ vice president. – Rappler.com