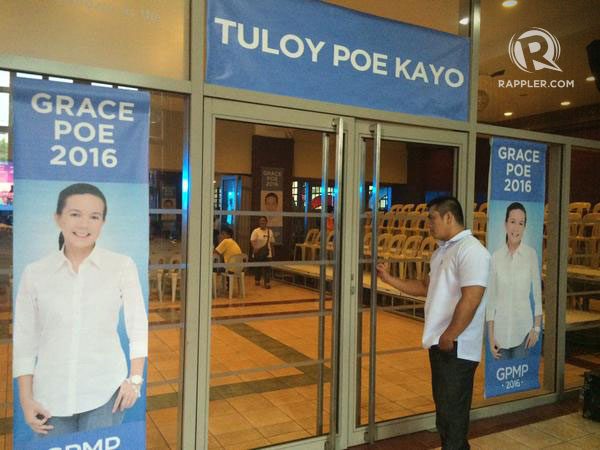 MANILA, Philippines (UPDATED) – After months of meetings, decisions, and public courting, Senator Grace Poe is set to declare her bid for higher office in the 2016 elections.

She is set to make the declaration at the Bahay ng Alumni at the University of the Philippines Diliman in the early evening of Wednesday, September 16.

The venue is where her father, the late well-loved actor Fernando Poe Jr, delivered an emotional speech before a huge crowd in 2003 after declaring his candidacy against then President Gloria Arroyo, said a staunch FPJ supporter.

As of posting, her mother, actress Susan Roces, as well as Poe’s husband Neil Llamanzares and their children have arrived at the venue. Also expected to join Poe during her announcement her friends from the entertainment industry, who helped in Poer’s 2013 senatorial campaign.

The program started at 3 pm, with clips from FPJ’s movies being shown. Supporters from different cities in Metro Manila and from Central Luzon and Bicol were among the earliest to arrive at the venue.

Groups like the FPJPM, All for Grace, and ACAPIFI were also present. FPJ for President Movement was the group that organized at the grassroots for Poe’s father when he ran for president in 2004.

The hundreds of supporters present so far are wearing Grace Poe shirts and other blue and white paraphernalia.

Poe’s actions before the declaration gave telling clues on her plans for higher office. In just a week, she visited the vote-rich provinces of Cebu, Pangasinan, and Nueva Ecija to promote her platform and explain the citizenship and residency issues hurled at her.

She has been leading in national presidential preference surveys, and she also publicly, although diplomatically, declined the Liberal Party’s invitation to be the running mate of administration standard-bearer Mar Roxas.

In rejecting to run with Roxas of the Liberal Party (LP), Poe will lose backing from the administration.

In 2013, she ran as an independent candidate, but was widely supported by the administration coalition. In fact, it was President Benigno Aquino III who insisted she joined the slate.

But while times have changed, Poe has learned a different approach. Months ago, she started talks with the Nationalist People’s Coalition, the second largest political party next to the ruling LP. Talks are rife NPC is set to support her bid.

It is unclear, however, if the NPC would support Poe’s expected running mate, Senator Francis Escudero, who bolted the party in 2009 due to campaign funds issues.

Amid criticisms that her friend and ally Escudero is a baggage and that he influences her decisions, Poe maintains she is independent, even declaring her bid on her own. Escudero is declaring a day after, Thursday, September 17, but Poe will be there to introduce him.

Escudero, LP insiders say, is the roadblock to the administration’s plans for a Roxas-Poe tandem.

Poe earlier said she is more comfortable to run with Escudero, citing the help of the latter during the 2004, when Poe’s father ran for president, and in 2013, when the practically unknown Poe ran for senator without a machinery. (READ: Grace Poe and Chiz: Campaign Partners) Poe admits her biggest capital is the name of her father, the late action star Fernando Poe Jr, who remains well-loved by the masses. Father and daughter Poe faced the same issues – citizenship and government inexperience.

In the process of finalizing her plans, Poe said FPJ is a pivotal force in her political life. She said, when in quandary, she asks herself the question, “What would my father do?”

She said it would have been easier to decided if FPJ were still alive.

In 2004, FPJ, who had no political experience, ran against then-incumbent President Arroyo. He lost in what was widely believed to be a rigged election.

But Poe practically reclaimed FPJ’s loss in 2013 when she topped the senatorial race, with a historic 20 million votes.

(I remember him all the more now. And I pity him more when I think of what he went through in 2004. I had at least some government experience. My father entered politics without any idea how dirty this game is.)

Another lesson she learned from FPJ’s campaign experience is that running for president is “probably the most difficult thing in a person’s life to undergo.”

“One must never lose sight of the reason why we do this – to serve the country. Not because of power or influence, or simply because one feels that they have been in power and influence for decades, so they believe they deserve it,” Poe told Rappler.

While criticized as a newcomer or “unripe” by her former ally President Benigno Aquino III, Poe stood tall and gave herself more credit than that. Poe said there are those who have stayed longer in government but have committed “sins” to the public. (READ: Explain your ‘sins’ before questioning me)

With this, Poe is banking on her supposed clean image. After all, her roles in the Senate investigations on the Metro Rail Transit or MRT 3 and the Mamasapano incident were well received.

She also signed the committee report recommending plunder charges against Vice President Jejomar Binay, also a former friend and ally, and spearheaded the report that held Aquino accountable for the botched Mamasapano operation.

She became so well liked that it translated into high numbers in national surveys, prompting political camps to try to get her. But when Poe’s numbers sustained its momentum, issues on her citizenship and residency came to light. (READ: TIMELINE: Grace Poe’s citizenship residency)

Poe is facing two cases before the Senate Electoral Tribunal and the Commission on Elections on the basis of her alleged questionable citizenship.

Poe insisted she is a natural born Filipino citizen and did not hide from the public the fact that she is a foundling. Poe argued international conventions protect the rights of foundlings such as herself.

The SET is set to decide on the matter by November. The Comelec case, experts say, would likely reach the Supreme Court, whose composition is a mix of Arroyo and Aquino appointees. How court decisions would affect the political moves of Poe remains unclear to date.

In an apparent challenge to senator-members of the tribunal, the frontrunner in presidential preference surveys said the public would be both the witnesses and judges in the case against her. (READ: Grace Poe: People will be witnesses, judges in disqualification case) – with a report from Jee Y. Geronimo/Rappler.com