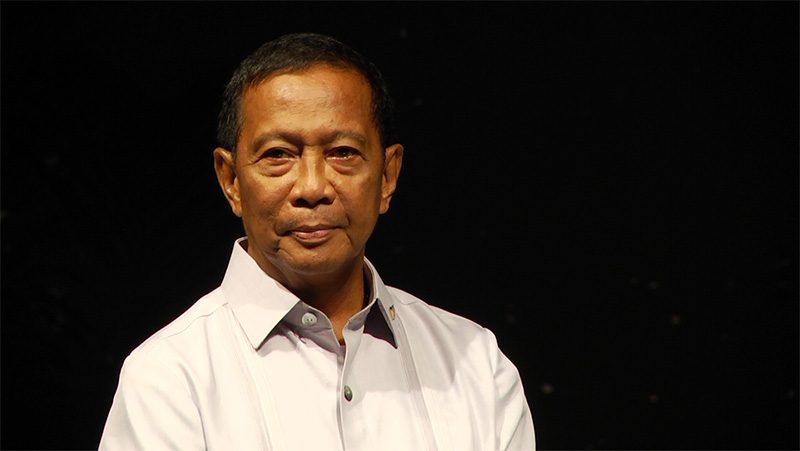 Facebook Twitter Copy URL
Copied
Sometimes piqued, but remaining calm, the Vice President answers questions about informal settlers in Makati, corruption, and why he criticizes an administration he was long part of

LAGUNA, Philippines – Students of the University of the Philippines (UP) roasted Vice President Jejomar Binay in a no-holds barred forum, where they pressed him about informal settlers in Makati, corruption, and why he criticizes an administration he was long part of.

Binay got into heated exchanges with students of UP Los Baños here during the question-and-answer portion of the event called “Forum on Governance, Transparency and Social Transformation” on Tuesday, September 15. (READ: VP Binay: Dynasties don’t case poverty)

Watch the full video of the Q&A here:

Agriculture student Lucky Patrick Lopez asked Binay why there are many informal settlers in Makati, the financial district whose success the opposition standard-bearer touts as an illustration of his experience and competence.

Lopez said he hails from the city of Mandaluyong, and was “neighbors” with the informal settlers of Makati.

Binay responded: “Ituro mo sa akin nasaan.” (Point to me where they are.)

Lopez shot back: “Hanapin na lang po ninyo, sir. Di ninyo yata nakikita.” (Just look for them, sir. I do not think you see them.)

Lopez retorted: ”Eh di mayroon pa rin, sir. Sabi ninyo wala.”  (So you do have informal settlers. You said there was none.)

Lopez then said that he visited Calauan, Laguna, where the informal settlers from Makati were relocated. He said their houses were shabby and had no roofs. The allegedly poor condition of informal settlers in Makati is one of the subjects of a yearlong Senate inquiry into corruption allegations against Binay. The Vice President is accused of earning kickbacks from overpriced buildings, bid rigging, and programs with ghost beneficiaries. Corruption is the biggest issue hounding his candidacy.

In the forum, Binay sought to counter the negative image he got from the Senate hearings by enumerating his projects as Makati mayor of 21 years. He delivered a lengthy speech where he said transparency, accountability, and participatory governance are his priorities.

“I am one with you in pushing for a freedom of information law,” Binay said, with the crowd applauding.

He added: “I believe in decentralizing the work of the government. This is one problem with our administration. Until now, the President cannot appoint officials because he wants to see for himself if they are qualified. You appoint secretaries. You should learn to trust them. I told my fellow Cabinet members that one problem is we keep passing on decisions to the President.”

‘You were part of admin’

Yet the most engaging part of the forum was the question and answer session that lasted for about an hour and a half.

Binay was a Cabinet member for 5 years until his resignation in June to launch his presidential bid, and to become the opposition leader. The Vice President was housing czar and presidential adviser on overseas Filipino workers’ affairs.

Zuñiga said that he, too, was vice chairman of the university’s student council but is active in his post.

“Sana kayo din (I hope you, too, become active). To say you cannot do anything or you don’t have control – what does that say about our government?”

Binay then explained that the questions asked of him about peace talks with the National Democratic Front, political killings, and other human rights violations were beyond the scope of his previous portfolio.

(If I interfere, the police and the defense department will not like it. They will say: “That’s not your job.” Yes, I was with the administration but organizationally, functionally, I have no function there.)

Still, he went on: “Bakit umaangal kayo? Ano bang function? Ang trabaho ko sa administrasyon ay tungkol sa pabahay eh ‘di ‘yun ang trinabaho ko.” (Why are you jeering? My work with the administration was focused on housing so that’s what I did.)

Another student asked Binay what he did to fight corruption, pointing out that this was the centerpiece program of the administration he belonged to.

Binay answered: “National Housing Authority, Housing and Urban Development Coordinating Council – all the agencies where I was chairman, we did not have corruption allegations. There was no taint of corruption. If you are talking about active action against corruption like in the Department of Agriculture, I have no authority there.”

He said: “Ang Presidente ang dapat tanungin. Wala naman ho akong authority.” (We should ask the President. I don’t have the authority.)

On the insinuation that the money was from the Office of the Vice President, Binay said: “Excuse me ha? Hinding-hindi po ha, excuse me ha? Pera ho namin iyon. Baka ang iba.” (Excuse me. I never do that. We use our own money. Maybe others do that.)

Binay though sought to defend politicians by saying that rules on campaigning only apply during the official campaign period set to start in February. He said there was a cap on campaign spending.

“Let’s give the presumption that candidates follow the law, and they do not steal,” he said to more boos from the audience.

At the end of the forum, Binay joined students in singing the school hymn “UP Naming Mahal,” raising his fist.

The Vice President is an alumnus of the premiere state university, studying political science and law in the Diliman campus in Quezon City.

The students punctuated the song by chanting a line that summed up the afternoon: “Iskolar ng bayan! Ngayon ay lumaban!” – Rappler.com