Grace Poe: I offer myself as your president 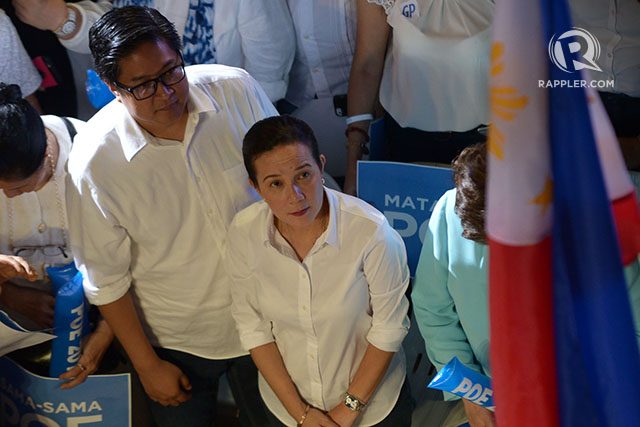 Facebook Twitter Copy URL
Copied
(UPDATED) 'Gusto kong ipagpatuloy ang mga simulain ni FPJ,' the presidential poll front runner refers to her father who was believed to have been cheated in the 2004 elections

(I am Grace Poe. A Filipino. A daughter, wife and mother.  And with God’s grace, I offer myself for the country’s highest calling as your President.)

Senator Grace Poe, in the past months the front runner in presidential preference surveys, announced on Wednesday night, September 16, her bid for the highest post  in the 2016 elections.

(I draw inspiration from each and every one of you. You give me the strength to pursue a higher calling for our country.)

Clad in jeans and white long sleeves shirt – the trademark get-up of her late father Fernando Poe Jr – the senator said pointed out that it was from the same hall that FPJ announced his presidential bid in 2004.

(I wanted to continue what my father FPJ had started…. Eleven years ago, in this very same hall, he declared that he wanted to help the poor, fight oppression, and forge a prosperous and just society.)

While FPJ lost in that election, which was widely believed to have been rigged by then President Gloria Macapagal Arroyo, Grace Poe was deemed to have reclaimed the victory when she topped the 2013 senatorial race.

No ‘monopoly’ of Daang Matuwid

Poe had met with President Benigno Aquino III a few times, with the latter broaching the idea of Poe running for vice president under the ruling Liberal Party. Still, she decided to pursue the presidency on her own.

While he credited President Benigno Aquino III for winning back public trust in government, she pointed out – in an apparent response to critics in the administration – that no camp has a monopoly of good and honest governance.

“Walang taong may monopolyo ng tuwid na daan,” referring to the slogan of the Aquino administration.

Aquino earlier said he is “not worried” by Poe’s declaration, saying that the Liberal Party has moved past “personality politics.”

Poe, in her declaration speech, mentioned her 20-point general plan of action. The plan is practically similar to the policies and programs of Aquino.

They shared the similar views on infrastructure, issues on the West Philippines Sea (South China Sea), tourism, and climate change.

Poe, however, took the popular route and pushed for lower income tax rates for citizens, something that the President himself opposed.

The senator also pushed for the FOI measure, which Aquino promised in 2009 during his campaign but remained languishing in Congress to date.

Poe, as in her past speeches, received loud applause when she mentioned the need for faster Internet speed, and typical of her, making a reference to pop culture.

“Many jobs will become more productive with faster internet connection. Kids will finish their homework faster and we can more easily talk to our loved ones working overseas without any Skype delays. When it comes to the Internet, connecting should not take Forever,” Poe said.

“In my case, alam naman ninyo (you all know), I am for Grace Poe. We are here on our personal capacity. I hope the party would end up with us. But that’s not something that I can with any kind of authority say,” Zamora said.

Poe mentioned her movie-like life in her speech. She made sure to use the memory of her father, the late action star Fernando Poe Jr, who is still well-loved by the masses. After all, she earlier admitted her biggest capital is his name.

In a video shown before Poe’s speech, FPJ’s supposed voice was telling the life story of his adopted daughter and how they considered her a blessing.

FPJ ran and lost in the 2004 presidential election against then President Gloria Macapagal Arroyo. The same issues raised against her father – citizenship and inexperience – are being raised against Poe now.

“When my father ran for the presidency, he was ridiculed; his inexperience was scoffed at and his citizenship questioned. Yet he bravely faced the challenge and the opportunity to help change the lives of his fellow Filipinos for the better,” Poe said.

She added FPJ’s “integrity, courage and goodness have become both [her] guide and inspiration.”

As for her mother Susan Roces, Poe said she taught her not to lose herself in the sea of politics. (READ: Susan Roces: This presidential campaign will be different)

Poe also banked on her dramatic life story as a foundling, even as critics use this to question her citizenship.

“My life is an open book. Who would’ve thought that a foundling would ever become senator? I thank you for giving me that opportunity,” Poe said. – Rappler.com