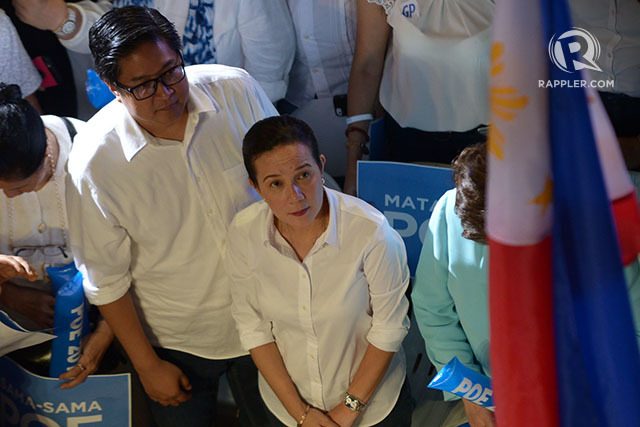 MANILA, Philippines (2nd UPDATE) – Senator Grace Poe, the front runner in presidental preference surveys, will undergo DNA testing to prove that she is a natural born Filipino and therefore qualified to be elected to national positions in the Philippines.

During the oral arguments before the Senate Electoral Tribunal (SET) on Monday, September 21, Poe’s counsel said the senator has “taken steps towards having a DNA test.”

“I have been authorized to say without prejudice to our position that we don’t have burden of proof, that we have the presumption of law in our favor, that the respondent has taken steps towards having a DNA test conducted with a probable biological match,” Alex Poblador told the SET before the session at the Supreme Court was adjourned.

Poe is facing a disqualification case filed against her by losing senatorial candidate Rizalito David. The petitioner is questioning Poe’s qualification as senator, arguing that since she is a foundling, there is a possibility that she is not a natural born Filipino and should have been disqualified as senator.

The Constitution of the Philippines requires that those elected as president, vice president, senator, and congressmen be natural born citizens. Candidates for local posts can be naturalized citizens.

But more than the possibility of unseating her as lawmaker, the decision on this case will impact on Poe’s presidential bid in 2016. Aside from topping the surveys on who voters will vote for if the presidential elections were held today, Poe is also seen as drawing support from the same voters’ base as the administration candidate Manuel “Mar” Roxas II.

Senior Justice Antonio Carpio, chairman of SET, reminded Poe’s camp that a DNA match is “a conclusive presumption of relation.”

“If you have a conclusive match, there’s a conclusive presumption. That will solve all our problems here, you cannot argue against that anymore,” he said.

In an ambush interview after the oral arguments, Poblador said he cannot disclose the names of the probable biological match due to privacy issues. But George Garcia, lawyer of Poe, said the person who was tested two weeks ago is from Iloilo.

While Poe “initiated” the process, the probable match also volunteered themselves, with the possibility that they are “parents or relatives of parents.”

“If they’re just relatives of parents, they will point also to the parent,” Poblador said.

He also reiterated that the process began because Poe had always wanted to know who her biological parents are.

“It’s not for the purpose of establishing she’s a natural born [Filipino], because our legal position is that she is, based on the fact that she is a foundling,” he added.

Poe, who was interviewed at the Senate on Monday, said they expect the results in 3 weeks.

Both the camps of Poe and David are required to submit to the SET their memorandum within 15 days, after which the case will be submitted for resolution by the tribunal. – with reports from Ayee Macaraig/Rappler.com