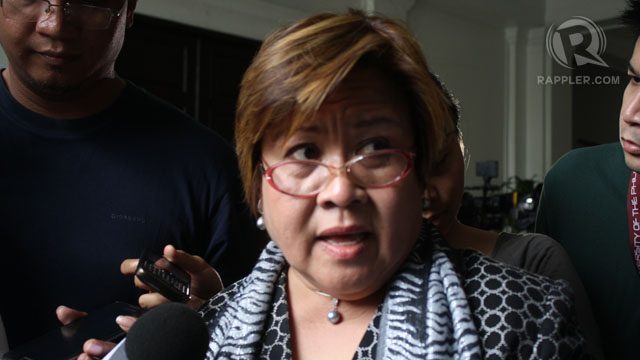 Facebook Twitter Copy URL
Copied
Justice Secretary Leila de Lima says she will 'accept' a senatorial slot from the ruling coalition, which is scheduled to launch its senatorial slate on Monday, September 28

MANILA, Philippines – As the ruling coalition prepares to launch its senatorial slate on Monday, September 28, Justice Secretary Leila de Lima said good-bye to employees of the Department of Justice (DOJ).

De Lima delivered her “State of the Department Address” on Thursday, September 24, her last address to the DOJ.

“As I turn over the reins to a new Secretary of Justice in a not so distant time, I fervently wish that he or she will carry on with the good works of justice that we have begun and sustain the good things that we have institutionalized,” De Lima said.

De Lima said that while she was not able to fulfill her “mission of delivering complete justice for all” during her 5-year stint, she is leaving behind a department that “will, in time, accomplish that mission.”

De Lima is being eyed as one of the 12 senatorial bets of the administration coalition in the May 2016 elections. The coalition is scheduled to announce its slate on Monday, according to various sources.

A recent Social Weather Stations survey ranked De Lima 7th in the list of senatorial candidates that voters would choose if elections were held at the time of the poll.

In fact, she is the only new name to break the monotony of re-electionists and returnees who did well in the survey, which was conducted September 2-5, 2015, a few days after the Iglesia ni Cristo (INC) protests that put her on the spotlight.

The influential INC asked for her resignation following her decision to investigate charges of illegal detention filed against the INC leadership by an expelled minister. The DOJ probe triggered the INC protests that began in front of the DOJ office on Padre Faura, Manila, and ended on EDSA on August 31.

De Lima cited this on Thursday as proof that the DOJ under her leadership has been firm in its stand to help others seek justice.

“A case in point involves a certain religious organization. We have been pilloried before the public as violators of their freedom of religion, simply for doing our job. In standing our ground, we were only guided by these principles: equal protection of the law and juustice for all. Our department is the first resort of those who cry for justice,” she said.

Asked about who will be replacing her in DOJ, De Lima said: “I cannot categorically say because I don’t want to be preempting the President. The President has asked me already about it two or three weeks ago on who is my preferred successor and I mentioned the name and it was also acceptabe on his part.” – Rappler.com