Duterte: Give me time to do ‘final soul-searching’ 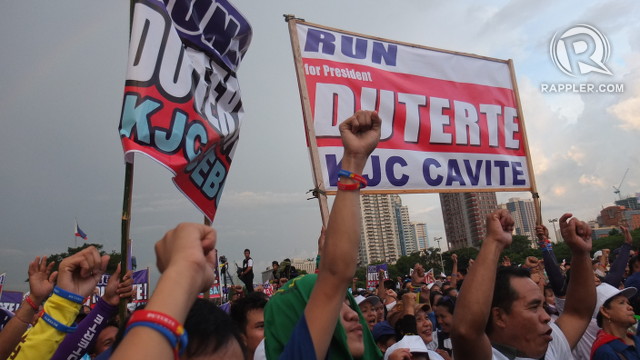 In a text message addressed to his supporters gathered at the Rizal Park on Saturday, September 26, he told them he would do “some final soul-searching with myself and my family,” in relation to the clamor for his presidential bid.

He ended his text message by saying that he would make his decision soon and won’t let them down.

“Magdedesisyon ako ng buong kalooban at mula sa puso. Pangako ko sa inyo – hinding-hindi ko kayo pababayaan (I will make my decision from the heart. I promise you, I won’t abandon you),” he said.

Duterte’s spokesperson, Peter La Viña, confirmed to Rappler that the message was sent by the mayor at 5:50 pm.

Here is his message in full:

(Thank you to all the people who have given me your support. I was told you endured the heat and rain. I’d like to apologize. I am in Zamboanga City to help find a solution to the kidnapping incident that happened in Samal Island last Monday. Thank you very much.)

I hear your clamor loud and clear. I know you want an alternative to those who now present themselves with their ambition to lead the country. I have repeatedly said that I do not have ambitions to be your president. Leaders answer not their self-interest or their personal glory. Leaders respond to duty and moral obligation.

Sa lahat sa kababayan natin, humihingi ako ng konting panahon (To all our countrymen, I am asking for some time), so I can do some final soul-searching with myself and my family.

(And after, in just a short time, I will face the country and all of you. And I will make my decision from the heart. I promise you – I will not abandon you.)”

His supporters greeted the message with invigorated cheers, despite the steady drizzle.

Duterte’s message comes days after the release of a Social Weather Stations survey that showed he was 4th among voters’ preferred presidential candidates.

Duterte made the statement nearly 3 weeks after the Davao City mayor made a “categorical” announcement that he would not seek the presidency.

He previously listed as reasons his age and health, his family’s opposition, and his unwillingness to accept money from big businessmen.

Supporters from various sectors spoke during the gathering, each one pleading with Duterte to run for president. (READ: 22 things to know about ‘Duterte Harry’)

Former North Cotabato governor Manny Piñol, one of the speakers, said Duterte is not playing coy.

He pointed out that the latest surveys still show a clamor for Duterte: