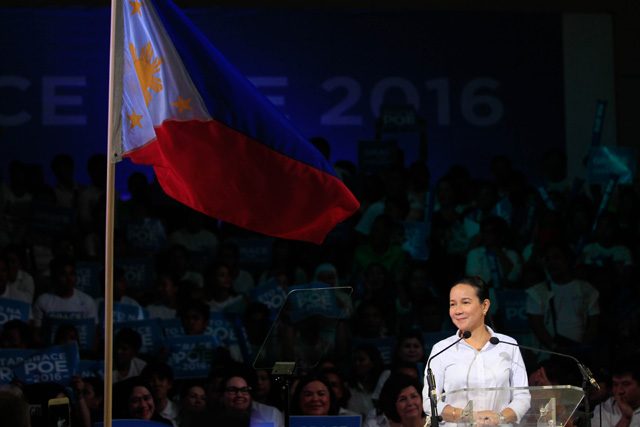 Facebook Twitter Copy URL
Copied
Complainant Rizalito David argues that not only is Senator Grace Poe not a natural born Filipino citizen, she is also not naturalized

MANILA, Philippines – Lawyer Rizalito David on Wednesday, September 30, called on Senator Grace Poe to fix her citizenship issue first before running for president in the 2016 elections.

(Decency requires that she fix it first before she makes a fool out of the people who will support her, give her money, donate to her campaign, when it’s possible she can’t run because first and foremost, she’s not a natural born Filipino citizen. )

Poe is facing a disqualification case filed against her by David, a defeated senatorial candidate in 2013. The petitioner is questioning Poe’s qualification as senator, arguing that since she is a foundling, there is a possibility that she is not a natural born Filipino and should have been disqualified as senator.

David filed on Wednesday a 160-page Offer of Evidence meant to “boost” their position that Poe is not a natural born Filipino. (READ: TIMELINE: Grace Poe’s citizenship, residency)

In fact, his camp argues that Poe has no citizenship – not even naturalized, as what Senior Justice Antonio Carpio, chair of the Senate Electoral Tribunal (SET), said during the SET oral arguments on September 21.

He added: “Pagdating ng 2010, ni-renounce niya ‘yung pagiging Amerikano niya (By 2010, she renounced her American citizenship), it became effective in 2012, so in 2012 she is neither Filipino nor American.”

David’s counsel Manuelito Luna said there are options for Poe: her husband, as an American, can re-petition her to become naturalized as spouse; or she can file a petition for naturalization under Commonwealth Act 473.

But this issue will be “difficult” to fix, David said, since Poe’s documents were “built” on a lie.

(Sometimes, when I think about it, I also pity her status now because she believed in her lawyers when they worked on her documents, that those documents are building on a lie and so the lies became bigger, now it’s really difficult to fix.)

Asked if he will oppose Poe’s presidential bid, which will be made official after the filing of Certificates of Candidacy (COCs), David said that as it is, other groups are already mulling this move – including other lawyers and a La Salle professor.

(Many will file, it doesn’t have to be me, because many have already expressed their intention to file. I could also file, but it’s no longer necessary because others would do so.)

For Luna, this proves that David did not file the disqualification case “for a personal reason” or agenda, but is “merely acting on his own as a citizen of this country” to “defend the rule of law.”

The SET required both camps to submit their memorandum on or before October 6, or 15 days after the September 21 oral arguments.

David said they will likely submit the memorandum – a summary of all their arguments – on Thursday, October 1, or at the latest, on Monday, October 5. They’re hoping for a decision from the tribunal before the filing of COCs. – Rappler.com