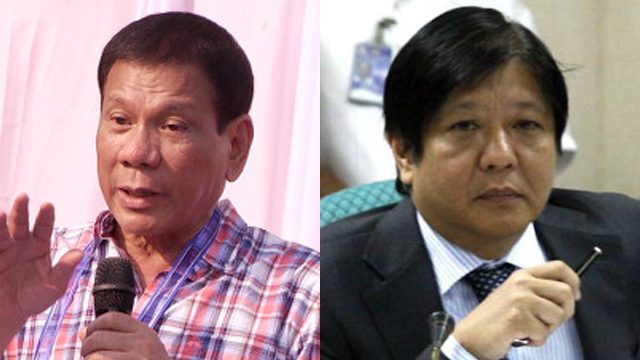 DAVAO CITY, Philippines – Senator Ferdinand “Bongbong” Marcos Jr met with Davao City Mayor  Rodrigo Duterte Wednesday night, September 30, in a posh hotel here. They were seen laughing as they stepped out of the elevator, but didn’t say if they agreed on anything.

Marcos told reporters that a possible tandem with Duterte was something that he first discussed with the mayor “a long time ago… not today.”

On Wednesday night, Marcos said he sought Duterte’s advice before he makes his own decision on whether to run for vice president. “I need to talk to somebody whose advice is genuine. [There were] many elements that we talked about. We talked about what’s happening, who is running, what I could possibly do,” Marcos told reporters after the meeting.

The  deadline for the filing of certificate of candidacy is on the week of October 16, one of the reasons the meeting was held, Marcos said. ” I came here to ask for his advice… [because] the deadline is near and these decisions have to be made already.” Marcos’ visit came a day after Senator Alan Peter Cayetano, Marcos’ party mate from the Nacionalista Party, also visited Duterte to persuade him to run for president and to offer himself as his running mate. Cayetano declared his bid for vice president on September 29.

After his meeting with Cayetano, Duterte predicted that the senator will “wipe out” all his rivals for the vice-presidential race.

The popular but controversial mayor was not as generous with Marcos, son and namesake of the late president whose dictatorship turned Davao into a hotbed of communist insurgency. Dutere is a known ally of the insurgents.

Asked about details of the meeting, Duterte said: “We talked about many things. We talked about politics and the chances of every candidate on the political horizon, including some advice on how to do it, in what areas Bongbong needs to concentrate [on]. He was asking for my advice [about his plans] and I said yes!”

Duterte said he promised to “get in touch” with Marcos “in the coming days.”

After all, he added, “we are nearing… about to cross the rubicon, the finality which is governed by the universal forces.”

Marcos said he will announce his plans “very very soon, when the proper time comes.”

The Binay camp is also wooing Marcos to be the running mate of Vice President Jejomar Binay, the first to declare his 2016 presidential bid.

Duterte saw his survey ratings shoot up in the first half of the year following a push by supporters for a presidential run. They’ve released political ads on him and he himself has barnstormed campuses in Luzon to indicate he was seriously considering a bid for higher office in 2016.

But he’s issued tentative statements, part of the reason his numbers did not improve in the latest Pulse Asia survey.

Last Saturday, Duterte asked supporters to give him time to do one final “soul-searching.”

On Monday, he again conceded he was in a “quandary.”

Asked about it again on Wednesday night, Duterte said: “I started here. I will finish it here.” – Rappler.com