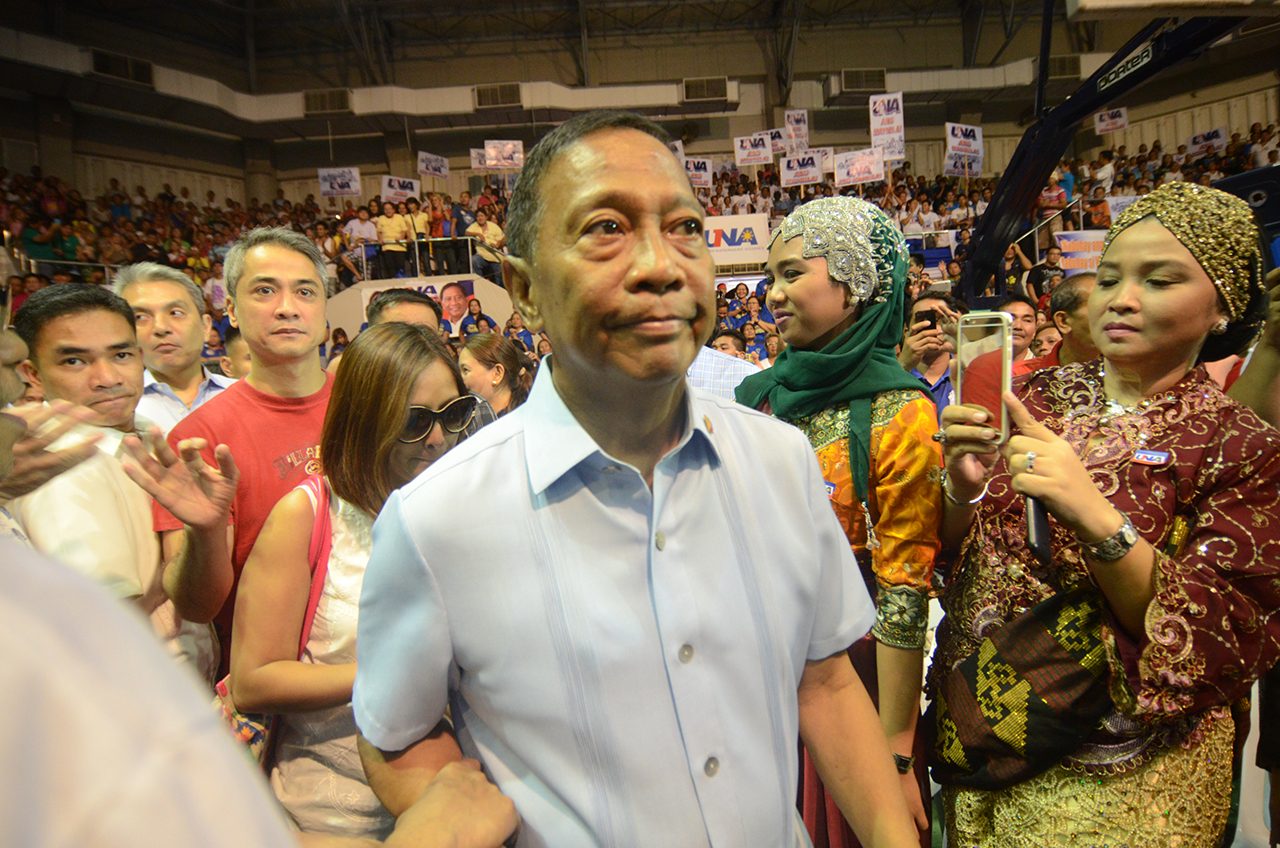 Facebook Twitter Copy URL
Copied
Less than 2 weeks before deadline for filing of candidacies, the Vice President says he prefers bets who ask UNA to accommodate them, not the other way around

MANILA, Philippines – Less than two weeks away from the filing of certificates of candidacy for the 2016 elections, the opposition United Nationalist Alliance (UNA) said it is “seriously” considering to adopt guest senatorial candidates.

However, its leader, Vice President Jejomar Binay is cautious, saying guests on its slate should be those who asked UNA to accommodate them and not the other way around.

Bautista explained that “there are candidates who are very close to the Vice President or to some leaders in the UNA who are constrained to run under another political party or who may run as independent, but we are willing to adopt them as ‘guest’ candidates.”

The Omnibus Election Code of the Philippines permits guest candidacy. A political party, it says, “may nominate and/or support candidates not belonging to it.”

UNA spokesperson Mon Ilagan said non-UNA candidates who wish to be adopted by the party will “need to apply.” Their adoption would have to be with the consensus of the executive committee.

“That’s why we’ve been saying that the senatorial slate that we’re developing is a balanced mix of politicians, like elected legislators. We have lawyers, we have retired military people, we even have organizers, sectoral leaders,” said Bautista.

“So this is not going to be just a roster of big traditional political names,” he added.

Party sources said UNA is considering the following for its 12-person senatorial slate:

Bayan Muna Reprsentative Neri Colmenares was also being considered, but he had declared he would be running with the ticket of senators Grace Poe and Francis “Chiz” Escudero.

UNA originally had until September 30 to declare its vice presidential and senatorial candidates, but this has been pushed back. (READ: With no VP yet, Binay party drops national convention)

Binay is expected to announce his running mate in the next few days. The search continues for their senatorial candidates as well, Ilagan said.

The Vice President is wary of accepting “guest” candidates, however.

(If we are going to adopt candidates, we’re only going to adopt those who will be applying with us, not those whom we have to make an offer to. There’s a difference between people who want to join you and people whom you need to woo.)

According Binay, this does not necessarily mean that UNA would have stricter guidelines in choosing its senatorial slate.

(It’s not going to be stricter. I think it would be more appropriate if we are going to adopt as “guest” candidates those who are willing to join us… We will try to complete the slate.)

Binay seems to have learned his lesson from the 2013 polls, when his party had to drop 3 of its “guest” candidates – Poe, Escudero, and Senator Loren Legarda. The 3 were guests candidates on both the UNA and Liberal Party platform. When President Benigno Aquino III demanded they choose only one party to campaign with, they chose LP.

So far, two names on UNA’s list have confirmed that they are aspiring to run as senatorial candidates under the opposition party: Kiram and Alma Moreno.

The two ladies have been seen with Binay in his recent visits around the country.

“It’s only in UNA, of course with the VP, na nakita ko na may pusong Pilipino para sa mga Pilipino,” said Kiram, who says she will fight for inter-faith and women empowermen and the Philippines’ claim on Sabah.

(It’s only in UNA, of course with the VP, where I saw a Filipino heart that cares for Filipinos)

(I don’t have any second thoughts with my party. I believe that Vice President Jejomar Binay is not at fault until there has been no sentence against him.)

Roque told Rappler that he is contemplating between running for senator and being a nominee of a new party-list organization that will advocate “economic, social, [and] cultural rights.”

He said, however, that he would vie for a seat in the Senate under UNA if the party will be able to financially support his campaign.

As for Isko Moreno, he says he is “open to anybody” for a possible senatorial bid but remains thankful that he is being considered by UNA.

According to Bautista, completing a full slate of senatorial candidates is indeed a challenge, but it’s not unique to UNA.

“There’s a thinking that because of the big number of re-electionists and former senators who will be coming back, then you would be fighting for just 3 to 4 seats,” he said. (READ: Old names top SWS 2016 senatorial poll)

“It’s a problem of all parties having to confront re-electionists as well as former senators whose names are already recognizable. Their public awareness is already very high as opposed to somebody who may be known for various reasons but not necessarily as a senator,” Bautista added.

Nevertheless, Ilagan said it would be important for UNA to fill all 12 slots in its senatorial slate because it would help the party secure votes.

“It’s important [na] lahat ay may kanya-kanyang programa at (It’s important that all of the candidates will have his or her own respective programs and) platforms of government that can help the president in policy directions and in crafting legislative bills,” he said.

“It also gives an impression that the front runner and the party are strong.” – Rappler.com