Oct 3, 2015 6:07 PM PHT
Rappler.com
Facebook Twitter Copy URL
Copied
(UPDATED) In a short video message, Senator Grace Poe says in Filipino, 'It is a privilege for me to have you fighting with me to achieve continuous change and have a genuine government' 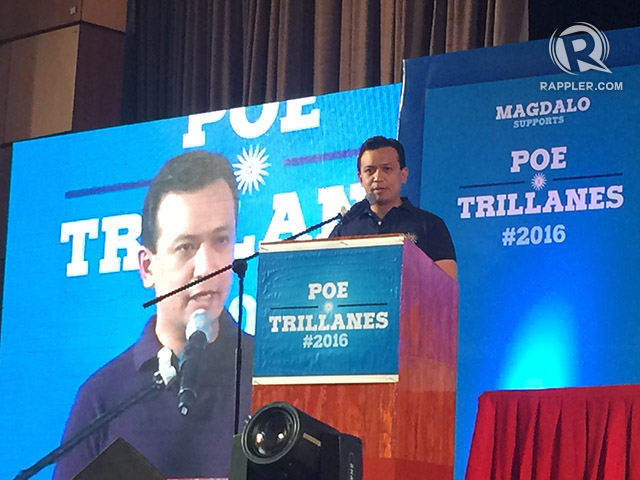 MANILA, Philippines (UPDATED) – Senator Antonio Trillanes IV, whose term is ending in 2019, formally announced his bid for the vice presidency in the 2016 national polls.

Several months after he first confirmed his plans for the elections, Trillanes officially declared his candidacy in a brief speech before 2,000 members of the Magdalo group who attended the meeting on Saturday, October 3.

(Through your [Magdalo group’s] decision, I will run as vice-president of the country in the upcoming elections.)

(This is a big challenge not only for me but for our organization because this is a huge opportunity to widen the scope of our service to our country.)

Trillanes will be running as an independent candidate.

Since other members of his political affiliate, the Nacionalista Party, are also eyeing the same post, the party said it would let their members decide whom to vote.

The Magdalo group, as in the past 2007 and 2013 elections, will back Trillanes’ vice-presidential bid.

After his brief speech, Senator Trillanes read Magdalo’s formal endorsement of Poe, while members who were holding signages that read “Poe-Trillanes” listened intently.

According to the Magdalo group’s Resolution No. 001, they are supporting Senator Grace Poe because she embodies the characteristics of an ideal president.

The next Philippine president “should be, first and foremost, intrinsically good as a person to guarantee the purity of intent in all actions and policies,” Trillanes said, reading the resolution.

The group also believes the next president should “have a clear vision,” “possess requisite leadership skills and competence to actualize the vision,” and ” embody the people’s aspiration to challenge the status quo.” 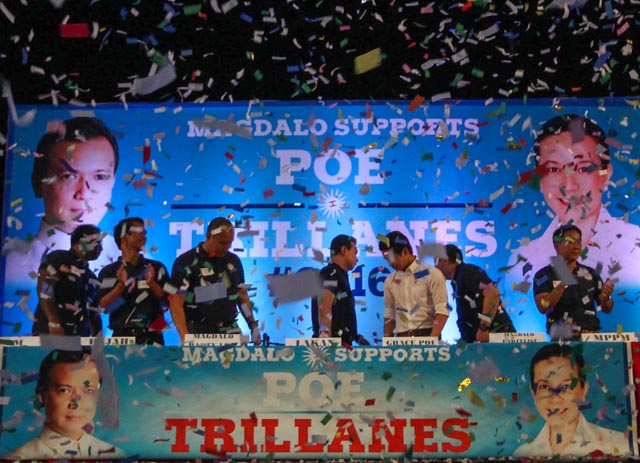 “Nagpapaslamat ako at ang aking ina,” Llamanzares said. (My mother and I are grateful [for your support].)

(Your party’s dream to make our Mother Nation more progressive can be achieved in 3 ways – honor for the whole country, inclusive development and integrity in government.)

(We are one in our continued fight against corruption and pushing for transparency in our government.)

(It is a privilege for me to have you fighting with me to achieve continuous change and have a genuine government.)

First elected during the 2007 midterm elections, Trillanes was best known as the senator who campaigned and won – with 11 million national votes – behind bars.

He was detained for rebellion charges against then president Gloria Macapagal-Arroyo.

The formal Navy lieutenant, together with 300 junior officers, staged a mutiny at the Oakwood Premiere in Makati City in 2003 to fight alleged corruption within the Arroyo administration.

Incarcerated, Trillanes campaigned through supporters – families, friends and fellow anti-Arroyo groups – including the Genuine Opposition, where he was a guest candidate. (READ: Newsbreak: What a coup!)

Although he was elected the 11th senator after garnering more than a quarter (26%) of the national votes, he remained jailed until newly-elected President Benigno Aquino III granted him and other mutineers amnesty in January 2011.

He ran for re-election in 2013, under the administration party, and won with 13.9 million votes.

During his term, Trillanes had 56 bills passed into law. Among the noteworthy laws he principally authored were the New AFP Modernization Act, Anti-Bullying Law, and the Gun Control Act.

He also played a major role in the Senate probe on the allegedly overpriced Makati Parking Building, which created tension between him and presidential candidate Vice-President Jejomar Binay.

The Senate investigations on various corruption cases against the Vice President have been a huge dent in the Binay presidential campaign.

(I believe in the Filipino people. Times have changed, people now see – Filipinos can no longer be fooled easily that’s why it won’t happen. He won’t be president of this country.) – Rappler.com