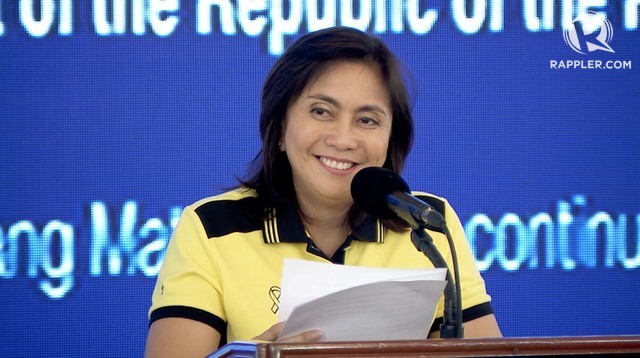 In a gathering at the Kalayaan Hall of Club Filipino on Monday, October 5, Roxas formally announced Robredo as his running mate in the 2016 national elections before a crowd that included President Benigno Aquino III, party mates, supporters and Robredo’s 3 daughters. (WATCH: Proclamation of Robredo as VP candidate)

Roxas said the country is witness “to another form of sacrifice” by a “single mother who has been picked and chosen to listen to the call of Daang Matuwid.”

“It’s a sacrifice of an entire family, to put nation above self,” said Roxas in introducing Robredo, as he acknowledged the sacrifices made by Robredo and her daughters – first when they lost the head of family, former Interior Secretay Jesse Robredo, who died in a plane crash in 2012, and second, their decision to finally run for vice president.

“Daang Matuwid needs you. Our boss needs you,” Roxas said in Filipino.

Roxas also addressed the Robredo children – Aika, Tricia and Jillian – expressing the hope that “you are comforted with the thought” that their father would also decide on what is good for the country. Jesse would have said, “Kung anong makakabuti sa bansa, sige lang,” Roxas said. 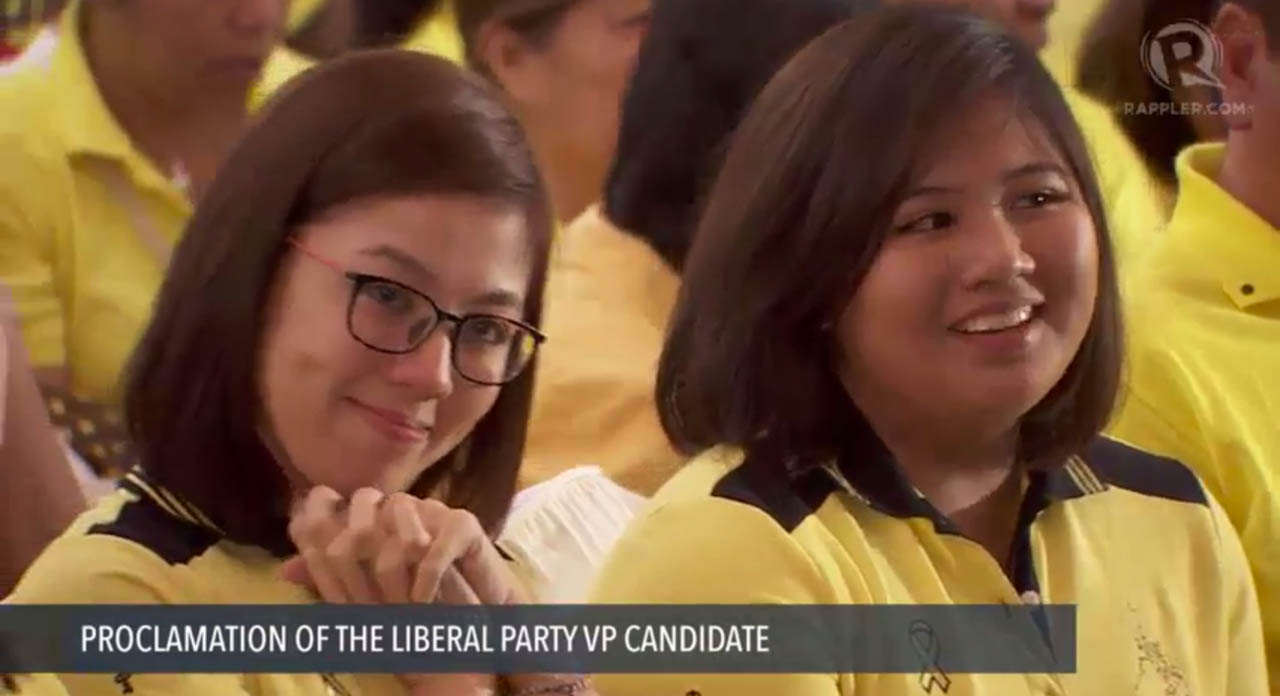 Jesse would do the same

Robredo accepted the challenge in a speech, saying that the decision-making process on the vice-presidential run was the toughest period that she and her daughters have been through since the death of Jesse. (READ: Full text of Robredo’s speech)

“We asked ourselves what Jesse would do if he were the one facing this challenge,” she said in Filipino.

She said they had no doubt Jesse would do the same when asked to serve. “We knew what Jesse’s answer would be. No matter how difficult, he won’t say turn down pleas for help.”

Robredo recalled that it was exactly 3 years ago when she also made the tough decision to run for Congress against the powerful Villafuerte clan. She promised her constituents in Camarines Sur’s 3rd district that she would continue to serve them, and challenged them not to allow the return of old politics.

Robredo is the third candidate from the Bicol region to seek the vice presidency.

Senator Antonio Trillanes IV, who declared his vice-presidential bid last Saturday, October 3, traces his roots to Albay, where his late father grew up. He and his group Magdalo will be supporting Poe’s presidential bid.

In a statement Monday, Trillanes said: “We welcome the entry of Cong. Leni Robredo into the VP race. She is not only a highly qualified candidate but also a very gracious lady that has sacrificed a lot for our country.”

The list of declared vice presidential bets now reached 4 to include Senators Alan Peter Cayetano, who, like Trillanes, belongs to the Nacionalista Party. Cayetano is eyeing a tandem with Davao City Mayor Rodrigo Duterte.

In the latest Pulse Asia survey on preferences for vice president, Robredo ranked 10th with 3%. Escudero had 23%, Cayetano was at 9% and Trillanes, 4%.

In his speech, Aquino thanked Robredo for accepting the party’s offer, noting how difficult it has been for her and her family. Aquino told the Robredo children: “I hope one day you forgive me.”

The President himself met with the 3 children to persuade them to allow their mother to seek the vice presidency.

He gave assurances to them that he will do everything to ensure they won’t feel alone, “na hindi kayo nag-iisa.” (READ: Aquino to critics: Spare Robredo children)

The LP was initially scheduled to announce both Robredo’s bid and the party’s senatorial slate on Monday. But the senatorial slate proclamation was pushed back again to Friday, October 9. Part of the apparent reason for the postponement is last week’s scandal involving a prospective senatorial bet, traffic czar Francis Tolentino. (READ: LP, this is your hour of test) 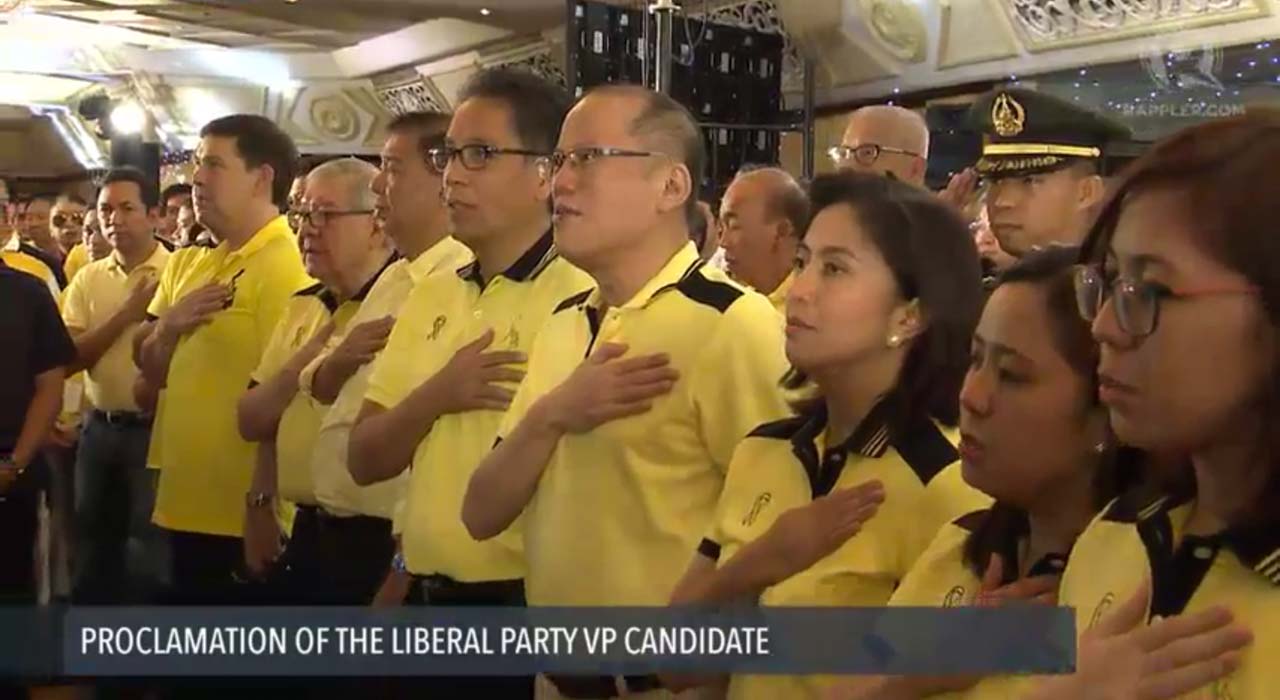 Journey to a decision

The ruling party formally made the offer to Robredo mid-September, the same week Poe announced her candidacy. Before that, the LP offered the post to Poe, despite clear signs that she was going to seek the presidency herself.

It took more than 2 weeks before Robredo gave her “yes.” The deadline for the filing of certificates of candidacy is a week from now, October 16.

The “cerebral” answer, Robredo said previous, would have been a “no.” Her 3 daughters were initially against a vice presidential run.

Robredo is the widow of former interior secretary and Naga City Mayor Jesse Robredo, who himself was a stalwart of the Liberal Party.

Politics was never supposed to be in the books for Robredo, who kept a low profile in the years her husband was Naga City mayor and eventually, interior secretary. A lawyer by profession, Robredo juggled work in a non-governmental organization and work as wife and mother to Jesse Robredo and their three daughters.

It was only in 2013, barely a year after her husband’s death, that Robredo found herself thrust into the world of politics. She ran as representative of the 3rd district of Camarines Sur, primarily to ensure the district would not go to Nelly Villafuerte, a member of the politically-entrenched Villafuerte clan. The Villafuertes are related to Jesse Robredo.

It’s this narrative that many in the LP say is similar to that of Roxas’.

Roxas was already a successful investment banker in the United States when his younger brother, Capiz Representative Gerardo Roxas, Jr died of cancer. Roxas returned to the Philippines and ran for the seat his brother vacated. He has been in politics since.

“I think [Robredo], if you cite some communications expert, is probably is as consistent and as pure as can be,” LP executive vice chairman and Transportation Secretary Joseph Abaya told Rappler in a previous interview. – Rappler.com