Why the Binay-Marcos tandem fell through 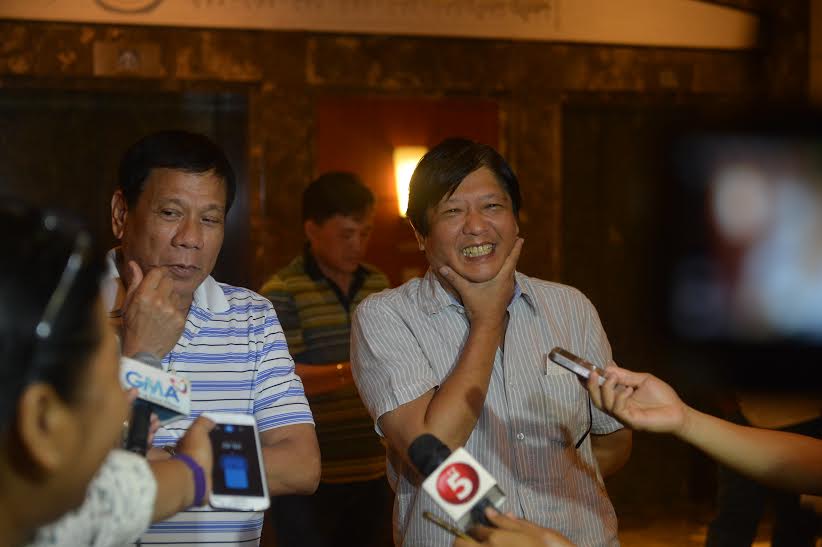 For the past 3 weeks, Vice President Jejomar Binay hinted that his tandem with Senator Ferdinand “Bongbong” Marcos Jr was about to be sealed. Yet on Monday, October 5, Marcos announced that he was running for vice president without a standard-bearer, just two days after Binay’s camp said talks reached “a very significant breakthrough.”

What exactly happened? Did Binay choose Senator Gregorio Honasan II over Marcos as media reports say, or was it Marcos who said no to the opposition leader?

The collapse of the negotiations resulted from the opposition of the Marcos family to the partnership, Marcos’ preference for Davao City Mayor Rodrigo Duterte, and the lack of direct communication between the two politicians.

Until the end of the talks on Saturday, October 3, Binay and Marcos never met face-to-face.

Sources involved in the talks told Rappler that while Binay and Marcos spoke directly for the first time over the phone on Friday night, October 2, developments changed after the senator consulted his family over the weekend. Marcos then sent word to Binay about the outcome of the consultation.

“They were able to talk. They thought that the stage was set for an agreement. But the next day, there was a change of mind, not necessarily from Bongbong himself but from the family, Mrs [Imelda] Marcos. But they remain friends,” said an insider allied with Binay.

The source said the two sides agreed to attribute the end of the talks simply to “political constraints,” a reason Marcos echoed in his official statement announcing his independent vice presidential bid.

Honasan, now emerging to be Binay’s running mate, admitted on Monday that he began to be considered for the slot when talks with Marcos became “protracted.”

The choice of Honasan culminates two months of negotiations with Marcos, where Binay repeatedly endorsed the tandem despite the senator’s indecision and noncommittal pronouncements on the partnership. 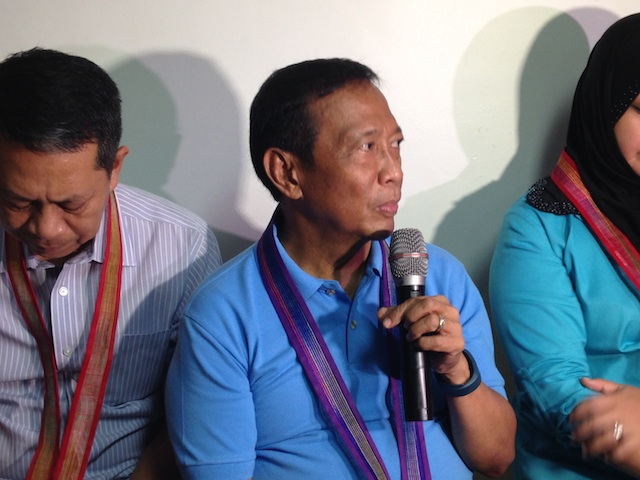 Marcos was not always Binay’s first choice for his vice presidential bet. They were never even political allies in the first place.

The opposition standard-bearer first gained prominence as a lawyer who defended human rights victims of martial law. He supported former President Corazon Aquino in fighting the dictatorship of the senator’s late father, President Ferdinand Marcos, even earning the moniker “Rambotito” for gearing up to defend Aquino from coup attempts.

After the 2013 midterm polls, Binay considered actor and Senator Jinggoy Estrada as running mate. But the son of former President now Manila Mayor Joseph Estrada was implicated in the pork barrel corruption scandal and was jailed for plunder in June 2014.

It was only in July 2015 when Binay first mentioned that the search committee of his opposition United Nationalist Alliance (UNA) was considering Marcos.

He justified the decision as part of his goal of leading a “unifying, healing” administration. Binay’s partymates also said Marcos brings the so-called “solid north” vote of the Ilocos region, and the Waray constituency of his mother, former First Lady Imelda Marcos.

For the first time, Binay did not get rejected.

“I am flattered to be considered but all decisions made at a national level will have to include consultations with my party,” Marcos said in July, referring to his Nacionalista Party (NP).

On August 6, the senator revealed that he got a formal offer to be Binay’s running mate from UNA President and Navotas Representative Tobias “Toby” Tiangco, who happens to be Marcos’ cousin-in-law.

Marcos’ response consisted of lines that he would repeat for the next two months: that he was still deciding which post to vie for as his first Senate term is ending in 2016, that he has to consult the NP first, and that he has to survey the “political landscape” before deciding.

Since then, other intermediaries joined Tiangco in pushing for a Binay-Marcos tandem. UNA Secretary-General JV Bautista told Rappler that the intermediaries were composed of “influential civil society groups including from the religious sector.”

Yet when Binay said on September 16 that talks with Marcos were already 90% concluded, the NP member was surprised. Marcos raised the accuracy of the messages the intermediaries conveyed to the Vice President. 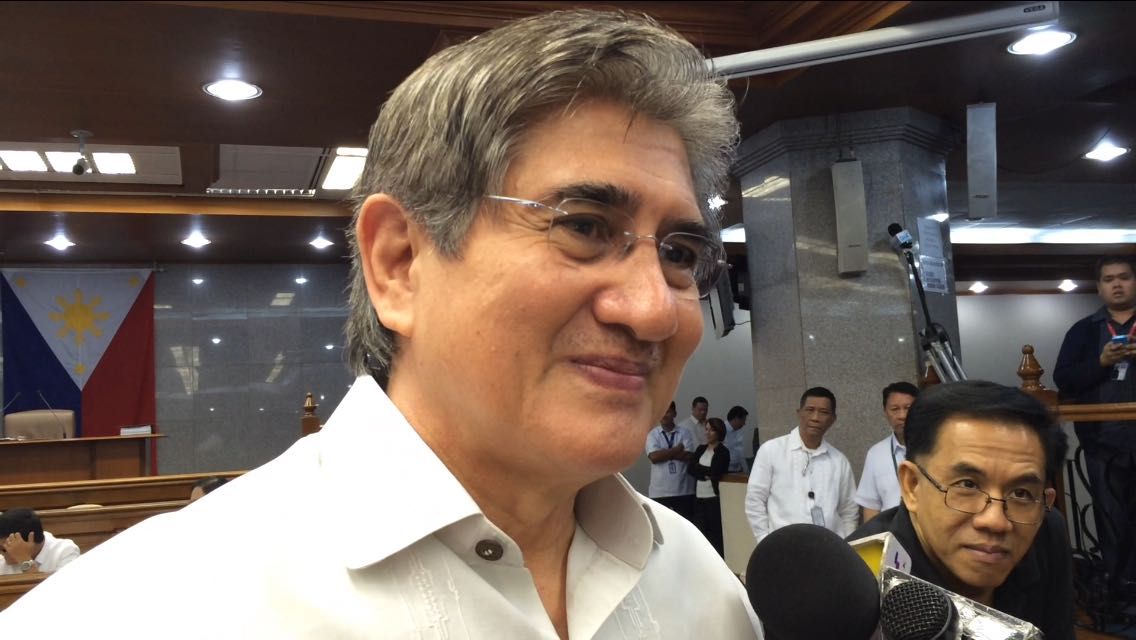 There were signs that Marcos was not fully sold on the alliance.

Since September 16, Binay often told reporters that the announcement of his running mate was impending, either within the same week or the next week. Each time, Marcos would repeat that he had no decision yet.

While Binay announced Honasan as another option on September 21, the former rebel soldier quickly turned down the idea. The Vice President still named Marcos “plan A.”

Yet UNA’s self-imposed deadline of finding a running mate by September 30 lapsed without an announcement of a Binay-Marcos tandem.

By this time, Binay allies including Bautista and former Quezon Representative Danilo Suarez were already pressing their principal to choose Honasan as the October 12 to 16 deadline for the filing of candidacies was drawing near.

Time ran out to convince another running mate but they said UNA could prevail upon Honasan to change his mind “for the sake of the party.”

Marcos’ preference also became clear when the senator flew all the way to Davao City on September 30 to meet with Duterte. The move was largely seen as following the lead of partymate Senator Alan Peter Cayetano who sought the mayor’s support for a possible tandem. In contrast, Marcos made no such effort to meet with Binay.

Still, Binay dismissed the meeting as a mere consultation. While the Philippine Star quoted an UNA source as saying that the media focused too much on Marcos instead of Honasan, it was actually the Vice President who said he did not want to move on to plan B yet.

“Plan A is not yet over. If you conclude plan A, that’s when you talk of a plan B,” Binay told reporters on September 30.

The former human rights lawyer was so keen on teaming up with Marcos that he even defended the tandem from criticism that they were strange bedfellows.

“I’ve been telling my friends, especially my confederates during the Martial Law regime that, one, we have to move on. Second, this is the son. This is not the father,” Binay told CNN Philippines on October 1.

It was only when Binay got word from the Marcos camp on October 3 that he became convinced that the team-up will not push through.

A source privy to the exchange that day said “the past” discouraged the Marcos family from backing the tandem. “Maybe because Binay was the one spearheading the rallies before when he was with Cory. Maybe they (Marcoses) did not overcome that difficulty.”

Political analyst Earl Parreño, board member of the Institute for Political and Electoral Reform (IPER), said that besides political history, the corruption controversy against Binay made politicians like Marcos wary of a partnership.

Allegations that Binay pocketed millions of pesos in kickbacks from Makati projects brought down his ratings, and removed his long-held front-runner status in the presidential race.

“No one wants to join him because from being unbeatable, his popularity went down. It’s like it’s your death wish. Because if you’re an opposition candidate and you are beatable, you do not have the resources from the administration, then you could really be beaten,” Parreño told Rappler.

In the end, Marcos decided to go solo while supporting a potential Duterte candidacy, and Binay finally opted for Honasan. One intermediary said the two just closed talks “amicably.”

“They will not utter any word that will hurt anybody. Wala namang sisihan,” (There should be no blame-game.) – Rappler.com