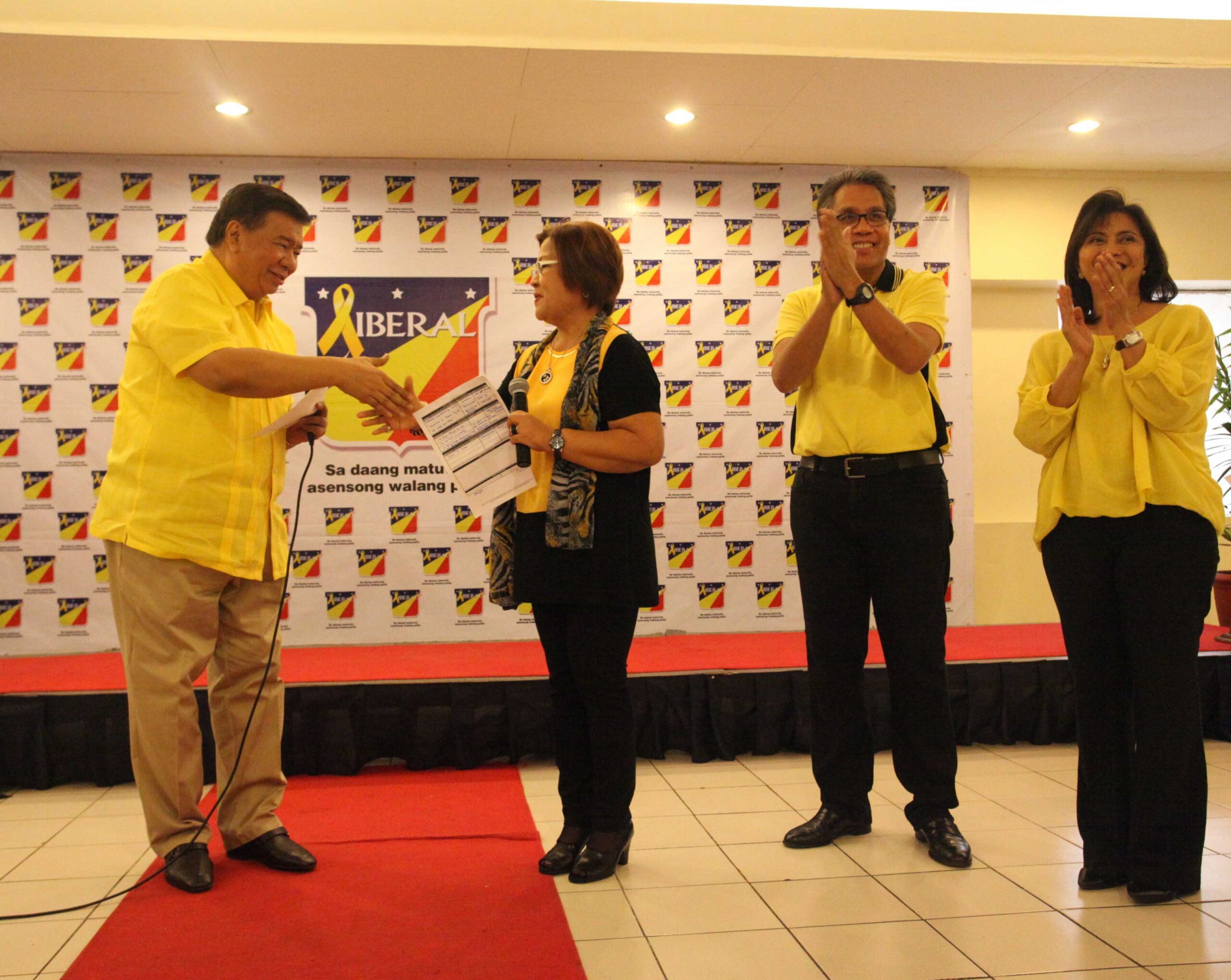 Outgoing Justice Secretary Leila de Lima on Friday, October 9, made official her plans for 2016 by formally taking her oath as a member of the ruling Liberal Party (LP).

De Lima earlier announced she would be stepping down from her Cabinet post but made this official only on Wednesday, October 7, when she submitted her resignation letter to President Benigno Aquino III, the LP chairman. Her resignation takes effect Monday, October 12 – the same day the LP is set to finally announce its full Senate slate.

Various sources from within the LP have confirmed De Lima is assured a slot in the ruling party’s Senate slate. Public interviews with Roxas and Aquino have practically confirmed as much as well.

(Secretary Leila’s contribution when it comes to justice is clear. She stood by the principles of Daang Matuwid in pursuing cases against corrupt officials as Secretary of Justice.)

De Lima, appointed justice secretary in 2010, oversaw the filing of cases against politicians – both from the opposition and the administration – over their alleged misuse of their pork barrel. Among the most infamous of these cases involved Senators Juan Ponce Enrile, Jinggoy Estrada, and Ramon “Bong” Revilla Jr.

Estrada and Revilla remain locked up while Enrile has since been granted bail. Their cases are still being heard.

It was also De Lima who ordered the investigation – and the subsequent filing of cases – against Muslim rebels over the death of the national police’s 55th Special Action Company (SAC) during the controversial “Oplan Exodus.” The department, however, was unable to file charges over the deaths of those from the 84th SAC due to lack of evidence.

Recently, De Lima came under fire after the influential Iglesia Ni Cristo (INC) staged a protest outside her department over the government’s alleged overreach into the church’s internal affairs. This stemmed from the move of the INC’s former ministers to file serious illegal detention charges against some INC leaders.

The INC wanted Aquino to sack De Lima and for the cases to be junked outright. The government, according to sources privy to discussions, did not give in to any of the INC’s demands. After almost 5 days of protests, the INC’s leadership decided to end its mass action.

Among the former or outgoing Cabinet secretaries seeking a Senate post, it is De Lima who stands the best chances of nabbing one, if pre-election surveys are to be believed. In the latest Pulse Asia senatorial preference survey, 35.2% of respondents said they would vote for the justice secretary, putting her within striking range of the “Magic 12.”

She ranks 9th-14th in the latest Pulse Asia poll. – Rappler.com