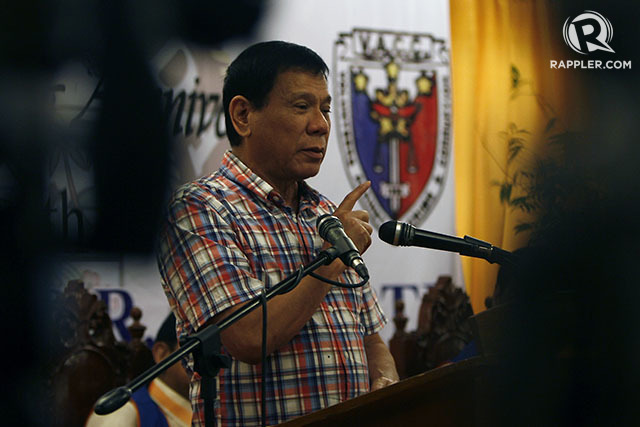 MANILA, Philippines – In a few days, the wait will finally be over.

Davao City Mayor Rodrigo Duterte will have to give his final answer to Filipinos the world over about his plans for 2016.

Exactly a week from now, October 16, will be his last chance to file his certificate of candidacy if he intends to run. A declaration should come before then. Some say it could come as early as this weekend.

The Duterte camp has been busy the past few days. Aside from assisting in the Samal kidnapping incident, Duterte travelled to Santa Cruz, Davao del Sur addressing New People’s Army rebels in a speech.

But some of his most trusted advisers and friends have also been flying in during the last few days, Rappler learned. A meeting with Duterte took place late Thursday night, October 8.

Among the topics discussed were the results of a privately commissioned Pulse Asia survey focused on the Davao City mayor’s ratings among voters.

The survey is the same Ulat ng Bayan conducted from September 8 to 14 that was released to the public. But Duterte supporters had embargoed questions in the survey, Lito Banayo, one of Duterte’s political advisers, told Rappler.

His first consideration is, ‘is this good for the people?’

The most significant finding of the survey was promising statistics from the National Capital Region (NCR), he said.

It showed that from June to September, preference for Duterte in the region rose from 10% to 21% despite the absence of a formal declaration of his candidacy and even a public announcement that he was out of the presidential race.

In contrast, leading presidential candidate Grace Poe was said to have suffered a 16-point drop during the same time period in the region although she maintained her lead at 26%.

Vice President Jejomar Binay, at 22%, was statistically tied with Duterte. Manuel “Mar” Roxas came in 4th place for NCR voters with a score of 10%, said Banayo. But in Rappler’s report of the survey, Roxas garnered 11% in NCR.

Grace Poe “still leads in [the balance of] Luzon but it should only be a matter of time and strategy to catch up,” said Banayo.

Duterte, who is known to lead voters’ surveys in Visayas and Mindanao, has publicly voiced apprehension about how much support he has from Luzon, especially from Metro Manila.

In a visit to Navotas and Malabon earlier this month, he had jokingly told reporters he did not think Metro Manila residents would vote for him if he runs.

Could the new numbers have changed his mind?

Duterte has gone from a categorical “no” to an “I’ll think about it” in the span of a month.

For the past few weeks, the local chief executive has had to confront tremendous pressure from supporters from both inside his circle and out.

Alan Peter Cayetano’s declaration of his vice presidential bid from Duterte’s hometown only escalated the fervor. It was soon followed up by a visit by another vice presidential aspirant, Ferdinand “Bongbong” Marcos Jr.

It’s this pressure Duterte has been resisting in order to make a wise decision, said his close friend and trusted political strategist Leoncio Evasco Jr.

Evasco, now the mayor of Maribojoc, Bohol, was once Duterte’s chief-of-staff and campaign manager. He was present at the October 8 meeting with Duterte.

In a Tuesday phone interview with Rappler, he described Duterte’s decision-making process as “methodical.”

“He won’t make any hasty decisions. He will usually consult. He seems to be studying the short- and long-term implications,” he said.

Duterte’s biggest “insecurity,” said Evasco, is “people expecting too much from him, as if he is God.”

He said Duterte fears the sluggish bureaucracy and legal constraints that come with managing the national government. He also fears corruption of people under him, something Duterte also admitted in an interview with Rappler.

But the greatest factor that would push Duterte towards a “yes” would be the condition of the country, said Evasco.

“The first time he ran as mayor, we were discussing the condition of Davao. He saw it was chaotic then, so he promised he would take care of the peace and order.”

Duterte had previously said he harbored reservations about running because of his family and his exhaustion after 22 years of government service.

But Evasco said, “His first consideration is, ‘is this good for the people?’ He has the capacity to set aside his own comfort for that.” – Rappler.com