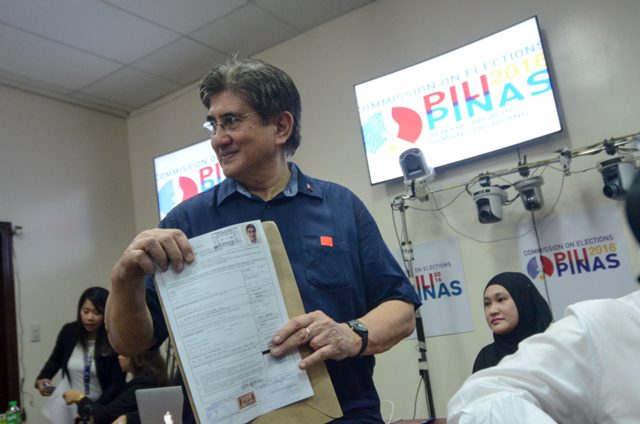 At 67, he spent 17 years as a soldier, 7 years as a rebel, and 17 years as a lawmaker. A reluctant candidate, the running mate of opposition leader Vice President Jejomar Binay was known as a daring coup plotter who challenged 3 presidents, and reinvented himself as a legislator. (READ: 9 things to know about Gringo Honasan)

As part of Rappler’s #PHvote “The Leader I Want” series, we look at Honasan’s stand on key issues that the next vice president will have to address: corruption, social inequality, climate change and disasters, foreign policy, overseas Filipino workers (OFWs), and the peace process.

Is the former rebel leader fit to occupy the country’s second highest position? Tell us in the comments section below or tweet using #TheLeaderIWant why or why not Gringo Honasan should be the next leader of the country.

Honasan made a name for himself as a charismatic leader of the Reform the Armed Forces Movement (RAM) that opposed corruption and cronyism in the military during the late President Ferdinand Marcos’ dictatorship.

Since then, he led and was suspected of plotting coup attempts against former presidents Corazon Aquino and Gloria Macapagal-Arroyo due to corruption in government.

In a twist of fate, Honasan is now accused of corruption in the pork barrel scam. He faces a graft complaint before the Ombudsman for allegedly pocketing P1.75 million ($37,666) in development funds for the poor through bogus non-governmental organizations.

Here is his stand on corruption:

The vice president of the opposition United Nationalist Alliance (UNA) identified poverty as the biggest threat to peace and order in the Philippines.

He said leaders should aim to improve the lives of the next generation to make Filipinos globally competitive.

Here are his initiatives and proposals on social inequality:

The senator from the disaster-prone Bicol region said that the National Disaster Risk Reduction and Management Council (NDRRMC) made strides in improving disaster response. Yet he said the agency must improve its coordinating mechanisms.

Here are his proposals on climate change and disasters: As a former soldier, Honasan considers national security and foreign policy as among his areas of expertise.

He has pushed for the modernization of the Armed Forces of the Philippines even during the Arroyo administration as the country faces “border problems” with China and Malaysia.

Here is where Honasan stands on foreign policy issues:

The 4-term senator said the government must create more jobs in the Philippines to encourage its citizens to stay, but at the same time protect distressed OFWs in times of crises.

Here are his ideas on OFWs:

Honasan was a soldier whose battles in Lebak, Jolo and Zamboanga was recognized through 3 Gold Cross Medals from former President Aquino.

Having fought in Mindanao as a young lieutenant, the senator said he supports the peace process, even after the January 25 Mamasapano tragedy that killed 67 Filipinos. Honasan participated in the Senate hearings into the issue.

“It’s important that we stay the course on the passage of the Bangsamoro Basic Law. We cannot inflict [a halt to] the peace process. The long-term cost might be too high to bear,” he said.

Here is his position on the peace process: