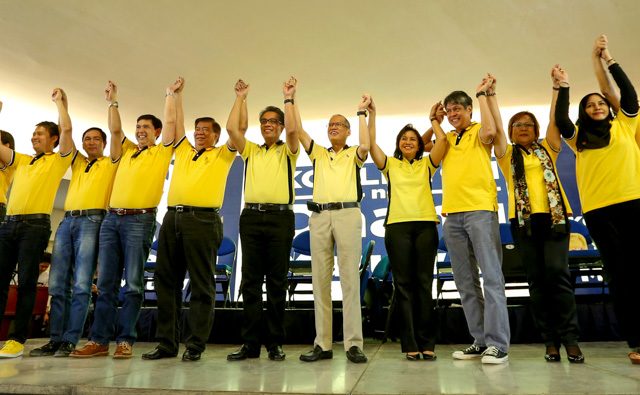 Facebook Twitter Copy URL
Copied
The 'woman with balls,' as LP stalwart Senate President Franklin Drilon describes her, knows the issue will continue to follow the LP ticket during the campaign

MANILA, Philippines – Senatorial wannabe Leila De Lima is okay with campaigning for the Senate alongside politicians she had ordered hunted and investigated while she was justice secretary.

She is a part of the 12-person Liberal Party-led administration ticket, which also includes TESDA Director Joel Villanueva and former Senator Panfilo Lacson.

There is no tension in the ticket, she said. “I’m a professional worker in government. So everything I do is just really for the sake of doing my job. It’s nothing personal and I respect the right of everyone to join the electoral race,” De Lima told reporters after the ruling party formally announced its Senate slate for 2016.

De Lima early this year ordered Villanueva charged with malversation of public funds due to alleged involvement in the pork barrel scam. The TESDA chief was previously quoted in reports expressing hesitation in joining the LP ticket because of the possible inclusion of De Lima.

The alleged pork barrel scam is the biggest case of government corruption pursued by the Aquino administration, leading to the detention of 3 incumbent senators. Villanueva maintained that the documents used against him were fake.

De Lima also ordered in 2010 a hunt for Lacson, then a fugitive evading arrest for the killings of veteran publicist Bubby Dacer and driver Emmanuel Corbito.

But the “woman with balls,” as LP stalwart Senate President Franklin Drilon described her during the launch of the LP-led ticket, said she expects that the issue will continue to follow them during the campaign.

“I know I will be repeatedly asked about that, pero desisyon ‘yan ng coalition, ng president, ng standard-bearer, ng partido (that’s the decision of the coalition, the president, the standard-bearer, and the party), and I’m just one of their choices. Personally I don’t have any problem with them. Personally, wala naman kaming alitan (I don’t think we’re fighting). As far as I’m concerned, hindi ko po talaga iyan pinepersonal (I don’t take it personally),” added De Lima.

“I don’t judge those who were part of the Ombudsman cases,” said De Lima, when asked about the case lodged against Villanueva.

Villanueva has since downplayed his earlier sentiments, pointing out that “there’s no such thing as a perfect set-up.”

Lacson did not attend the launch, citing a prior commitment. But he joined a meeting held at the LP headquarters with Roxas and members of the coalition Senate slate. – Rappler.com