Facebook Twitter Copy URL
Copied
Most of the unknown candidates present out-of-this world platforms, even as one of them echoes a deeper yearning to lead the country despite being ordinary

MANILA, Philippines – From “Archangel Lucifer” to “Kuya P,” dozens of so-called nuisance bets have trooped to the Commission on Elections (Comelec) to file their certificates of candidacy (COCs) for the highest positions in the land.

Most of them have presented out-of-this-world platforms, such as legislating 4 seasons in the Philippines, but some of them echo a deeper yearning to lead the country despite being ordinary.

Most candidates, as of Tuesday, have laid platforms that could have “put the election process in mockery or disrepute.”

One of them, Arturo Pacheco Reyes, told reporters on Monday that he wants to lead “an exodus to the promised land of tomorrow.”

He is also proposing a law to have the 4 seasons of winter, spring, summer, and fall in the Philippines. (Watch Reyes in the video below)

“And finally, I’d like the American dream to happen to all, to become a reality,” he said.

An old man named Alejandro Ignacio, who was the 18th person to file a COC for president, wanted something different.

Ignacio on Monday, October 12, spoke at a podium used by the likes of vice-presidential bet Senator Ferdinand “Bongbong” Marcos Jr at the Comelec office in Intramuros, Manila. 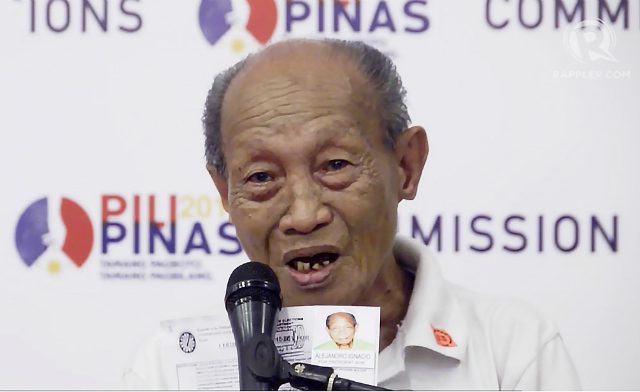 Referring to poverty in the Philippines, a teary-eyed Ignacio told reporters in a speech, “I believe nobody can solve this problem except an ordinary citizen like me, because I am very clean and honest to run the government.”

He added, “I am appealing to all media: Please help me to stand alone, to protect 100 million Filipinos now suffering in hunger and poverty.”

“Maawa po kayo sa ating bayan,” he said. (Have mercy on our country.)

(Watch Ignacio in the video below)

In a long-sleeved shirt with a dark necktie, senatorial bet Alexander Bautista spoke on the same podium on Monday, and said he wants to reform the Social Security System or SSS.

He said his “master” chose him to lead the Philippines.

Many election watchers complained that the Comelec shouldn’t entertain these bets in the first place. They said the Comelec should instead focus on the “more serious” candidates like Vice President Jejomar Binay, Senator Grace Poe, and former interior secretary Manuel Roxas II.

The Comelec, however, said it is giving these persons a chance to prove they should not be considered nuisance bets.

Comelec Spokesman James Jimenez on Tuesday said the filing of COCs is “a manifestation of democracy.”

(It is better, more appropriate, and more regular to give a person the opportunity to let his case be heard before we judge him.)