Oct 15, 2015 11:09 AM PHT
Mara Cepeda
Facebook Twitter Copy URL
Copied
(UPDATED) Makati Representative Abigail Binay is the fourth member of her family to run for mayor of the country's premier financial district. Her husband, Luis Campos, is running for representative in the 2nd District of Makati. 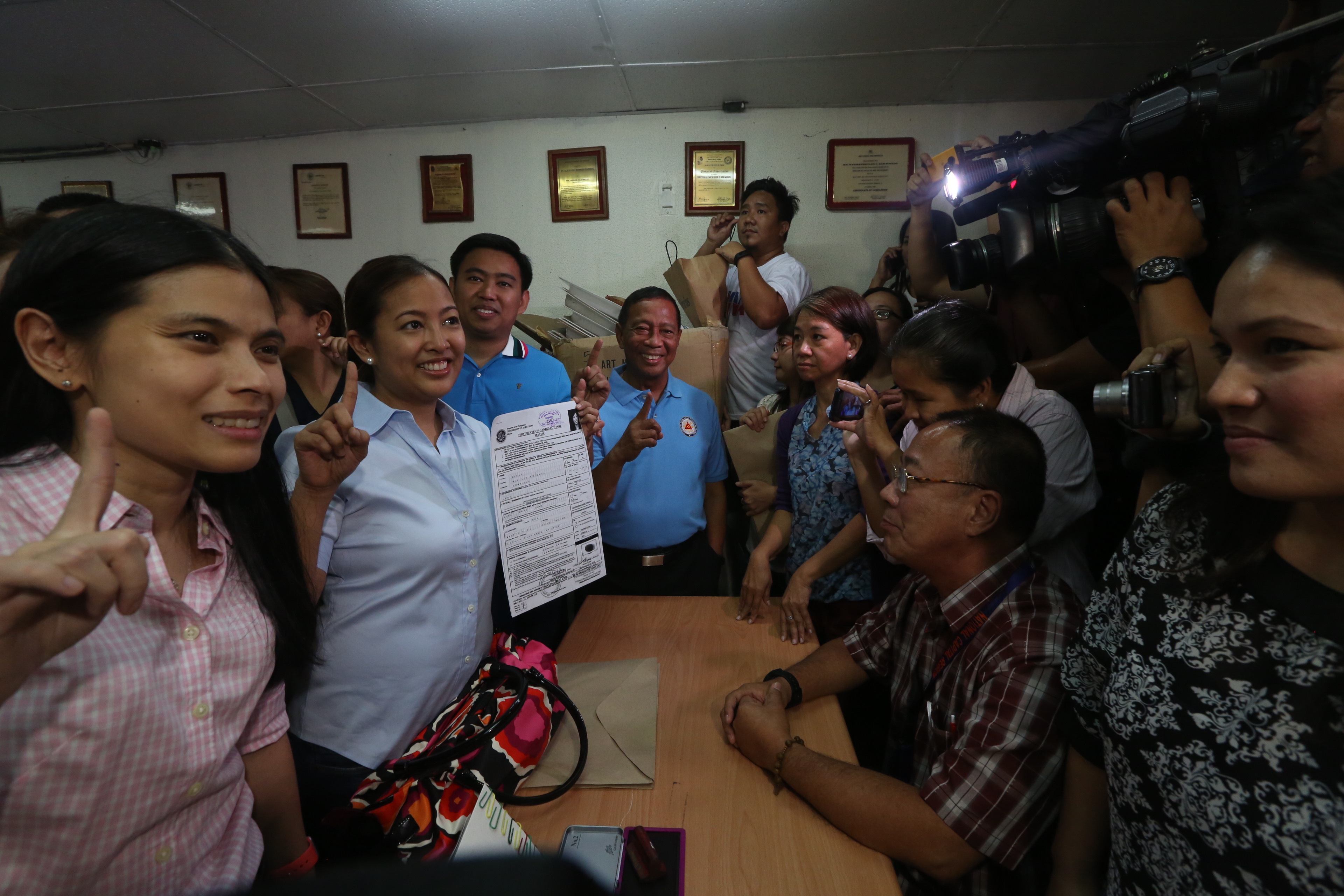 Her brother, suspended Mayor Jejomar Erwin “Junjun” Binay Jr, was supposed to run for re-election, but his dismissal order over the allegedly overpriced Makati city hall parking building II made UNA decide to field Abby instead.

Abby was accompanied by her entire family – her parents, Vice President Jejomar Binay and Elenita, and her siblings, Junjun Binay, Senator Nancy Binay and Anne – when she filed her COC.

Junjun Binay thinks his sister is “very competent” to run for mayor. 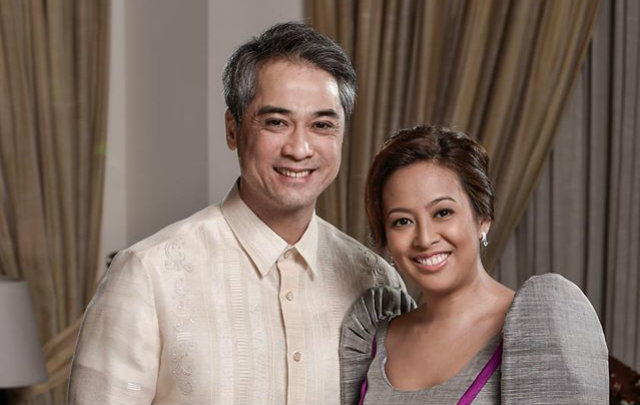 (She became the city representative in Congress for almost 9 years. She has contributed a lot in Congress. She is a lawyer. We can see that in terms of experience, knowledge, and skills, Representative Abby can definitely continue the brand of Binay service that truly helps the poor.)

Junjun Binay said Abby’s husband, businessman Luis Campos, will run for representative of the 2nd District of Makati, while Councilor Concepcion “Ichi” Yabut will run as congresswoman for the first district. The two Congress hopefuls have not yet filed their COCs as of this posting. 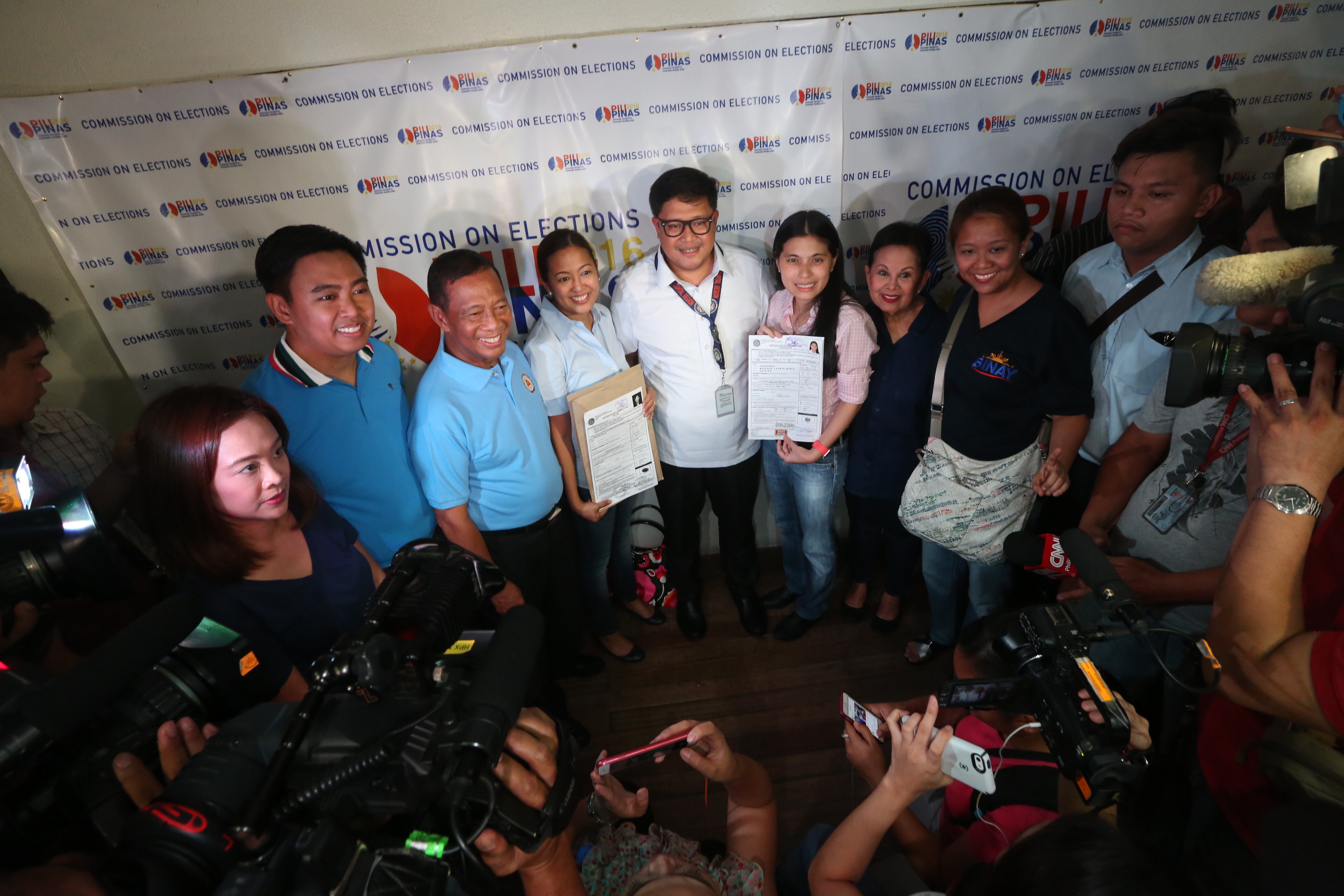 According to Junjun Binay, it was UNA’s decision for Abby to run for mayor.

He was referring to the suspension order he is currently serving and his recent dismissal order, both from Ombudsman Conchita-Carpio Morales. (READ: Binay camp: ‘OA’ DILG served Junjun Binay’s dismissal order at home)

According to Junjun Binay, the party’s decision was difficult for him as well.

(It was hard because there are people who still believe in me and who are hoping I would run again. But there are times when we should not let our personal interests get in the way. The party decided to choose Abby Binay because the party believes that would the best for Makati.)

Junjun Binay said he will still “work for the people of Makati.”

“‘Yun nga lang, nauukol, naaayon sa panahon ‘yung paglilingkod ko (However, I will be of service at the right time in the right way).”

Makati still for the Binays?

He also expressed confidence that his sister will beat Peña, who said that he does not consider the Binays to be his enemies yet he has chosen political rivals of the family as part of his ticket. (READ: Daughter of Binay’s accuser says she’s ready to serve Makati)

Makati has been a stronghold of the Binay family since family patriarch, VP Binay, was appointed as its officer-in-charge in 1986. His wife, Elenita, was also a city mayor. Most of the incumbent city councilors are allied with the Binay family.

Hundreds of Binay loyalists also came to support the UNA slate on Monday.

(We think our family was elected to serve here for a long time now because the people in Makati see that we’re doing things right. They are smart. They would know if there was anything wrong with our system of governance.) – Rappler.com