Oct 15, 2015 8:06 PM PHT
Raymon Dullana
Facebook Twitter Copy URL
Copied
In her attempt to regain the governorship, former elections commissioner Grace Padaca is up against Faustino 'Bojie' Dy III, to whom she lost in 2010 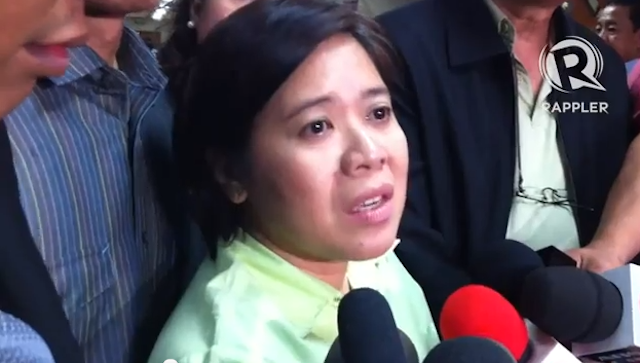 She will again face Governor Faustino “Bojie” Dy III, to whom she lost in the 2010 gubernatorial race by just 3,438 votes.

Padaca arrived at the provincial office of Commission on Elections (Comelec) in Ilagan City at 3 pm on Thursday with her mother and brother.

She is running as an independent candidate.

Padaca ran under the Liberal Party (LP) banner in 2010.

Two years after her failed gubernatorial bid, she was appointed by President Benigno Aquino III as election commissioner in October 2012.

Padaca left the Comelec two years later, after Aquino did not re-appoint.

The past days, Padaca had been ranting over the seeming pattern of the LP taking in non-party members to get as much support for its standard-bearer Manuel “Mar”Roxas II.

Ana Cristina Go, a former Nacionalista Party (NP) member and political opponent of LP and Padaca in Isabela, has reportedly been accepted by LP.

In an interview with Bombo Radyo, a local radio station, Padaca said she ran as independent because there was no offer to her from LP to become their standard-bearer in the province. – Rappler.com