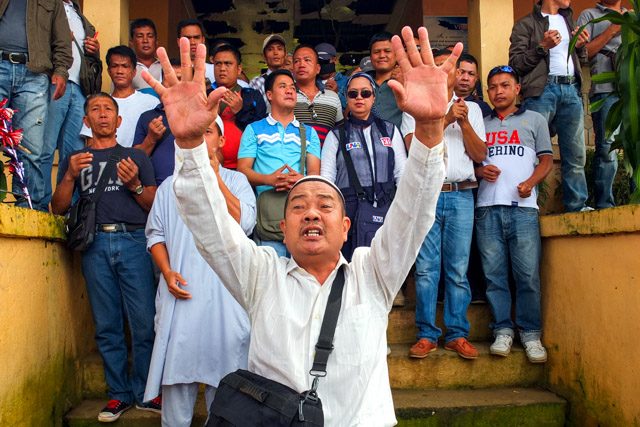 LANAO DEL NORTE, Philippines – The Army deployed at least 8 Simba armored vehicles around the Commission on Elections (Comelec) office in Pantar town on Thursday, October 15, to support the local police in preventing a recurrence of armed clashes between rival political camps.

United Nationalist Alliance (UNA) mayoral candidate Jabar Tago and his slate were able to file their Certificates of Candidacies (COC) after the military and the police successfully brokered an arrangement with the the rival camp of Mayor Mohammed Exchan Gabriel Limbona.

Limbona, who was dismissed by the Ombudsman but later favored by the Supreme Court, brought his private army and occupied the old municipal town hall where the local Comelec holds office. High-powered firearms could be seen at the windows of the garrisoned town hall.

Tago is the nephew of Acting Mayor Mangondaya Tago, who was installed in May 2014 to replace Limbona after his dismissal. But Limbona did not step down, resulting in the months-long standoff between the two mayors.

Tago, 28, said it was their clan’s decision to field him after his uncle decided to step down. He filed along with his vice mayoral canddiate Caumban Alumna and councilors Anwar Palagawad, Amel Macauyag, Boks Alingan, Anwar Mama, Abdah Macauyag, Jun Abbas, Saip Gubaten and Madid Pangsayan. 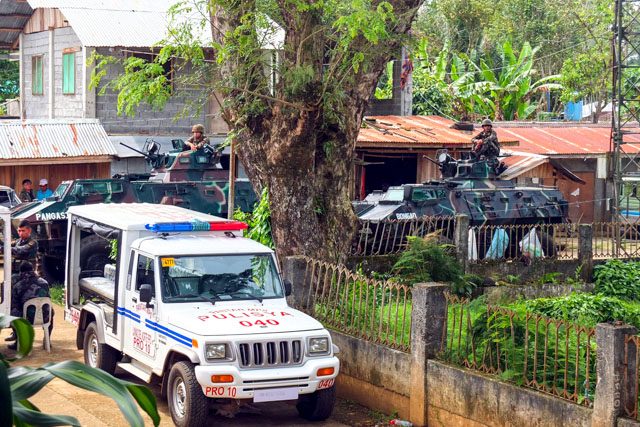 It’s a situation that is common in the two Lanao provinces, where clans fight for control of various towns.

According to a source privy to the talks, they agreed that Limbona’s camp would file their COCs between Monday and Wednesday morning. The rest of the week was scheduled for Tago’s camp.

Tension ran high inspite of the arrangement. Men around the town hall were either carrying firearms or bladed weapons. The Comelec officials, who faced constant danger because of the presence of private armed groups, were escorted by soldiers.

The private armed groups were not disarmed. Police Inspector Wilson Miflores said that it is a “very difficult situation with difficult local dynamic.”

The municipal police command has been “compromised,” he added.

Police Inspector Jaypee Dagami, team leader of the RPSB, said the town would be a warzone if not for the presence of security forces.

A murder case and the Aguinaldo doctrine

Limbona was administratively dismissed because of his alleged involvement in the 2007 murder of Pantar Vice Mayor Hadji Abdul Rasid Onos, according to a Sun Star report. He was also ordered disqualified for re-employment in government service.

Limbona was allowed to join the mayoral race again after the Comelec junked a disqualification case against him. Citing the Aguinaldo doctrine, the poll body said his reelection in the 2013 election effectively reversed the Ombudsman ruling. The Supreme Court, in a June 2015 ruling, upheld the Comelec ruling.

GMA News reported that the two camps engaged in a 22-hour firefight in August after a grenade was lobbed at Limbona’s residence.