The Leader I Want: Miriam Santiago’s to-fix list for 2016

MANILA, Philippines – Senator Miriam Defensor-Santiago first hinted at a presidential run on August 27, 2014, when she announced that she was recovering from stage 4 lung cancer.

Nearly a year later, on July 2015, Santiago admitted that she was eyeing the presidency in the 2016 elections. This week, she formalized her declaration.

Society leaders have been urging Santiago to run as early as 2014, and she herself believes the next president of the Philippines should be a woman.

But it was her silence in the months after – or the noise of other presidential hopefuls – that could have made the public forget her plan. In the latest Standard Poll, for instance, she placed 7th in voters’ preference among 8 possible presidential candidates.

This was why she caught everyone off guard by declaring her presidential bid on Tuesday, October 13, during the signing session of her book, Stupid is Forever More. It was the second day of the filing of certificates of candidacy for the 2016 elections.

This is how she wants to end her career in government, she said – as president of the Philippines “unless I get struck by another bout of cancer, but it doesn’t happen that often.”

As part of Rappler’s #PHvote “The Leader I Want Series,” we look at Santiago’s stand on issues the next president will have to focus on: corruption, social inequality, climate change and disasters, foreign policy, overseas Filipino workers, and peace in Mindanao.

What gains from the Aquino administration should she continue and which strategies should be changed? Tell us in the comments section below or tweet using #TheLeaderIWant why or why not Santiago should be the next president of the country.

It may often be the subject of the lady senator’s quotable jokes, but corruption is no laughing matter for Santiago.

In a 2014 speech, Santiago said public officials in the Philippines engage in corruption because “our anti-corruption laws so far, in most cases, are not actually implemented, and those who are guilty are not punished as they deserve.”

She considers the abuse of the now-defunct pork barrel system as the most notorious act of plunder in the Philippines.

Amid the investigation into plunder allegations against Vice President Jejomar Binay, Santiago filed a bill that seeks to expand the responsibilities of banks in preventing money laundering activities.

But ever the believer of good winning over evil, Santiago remains hopeful that good governance will triumph over corruption.

For her, the country will see less corruption if only citizens will elect more female lawmakers. She maintained that according to research, a lawmaker’s gender “has a distinct impact on policy priorities” which “makes it critical that women are present in politics to represent the concerns of women and other marginalized sectors.”

The feisty senator is a champion of the Reproductive Health law. She sponsored the measure that provides contraceptives and other reproductive health devices and services to the poor.

When the bill was enacted in 2012, Santiago said the law was the highlight of her year “as a woman and as a senator.” For her, an absence of this measure is “cruelty to the poor,” since it aims to empower Filipino women.

She is also for improving the quality of formal, non-formal, and special education in the country. Even while on medical leave, she has called on the Senate to look into the tuition hike of some 300 private colleges and universities, and the findings of the Commission on Audit that showed millions of new Department of Education textbooks are not K to 12-aligned. Santiago was also quick to criticize the unliquidated cash advances worth P5 billion for the social welfare department’s Conditional Cash Transfer program. This “inefficiency,” for her, shows the government’s “failure” in bringing “inclusive growth” to the poor.

She has also filed bills pushing for the protection of commuters – especially from taxi drivers “taking advantage” of their passengers – and the preservation of public transport in the country.

Santiago is a co-author of Senate Bill 2789 or the Youth Participation in Disaster Risk Reduction and Management Act of 2014, which has already been approved on third reading at the Senate.

The bill, which seeks to amend the Philippine Disaster Risk Reduction and Management Act of 2010, wants to include “responsive, empowered, and service-centered youth” in all levels of DRRM in the country.

She also wants to institutionalize a Flood Recovery Fund for Filipinos affected by floods, and a National Flood Insurance Program to protect homeowners, small business owners, and farmers from losses due to floods.

After Typhoon Yolanda (Haiyan) struck parts of Visayas in 2013, Santiago urged the Senate to look into the reported proliferation of child labor in Yolanda-hit areas. She also filed a bill that seeks to provide protection for children during times of disasters.

Santiago chairs the Senate committee on foreign relations – fitting for a constitutional expert who was once elected judge of The Hague-based International Criminal Court (ICC). She stepped down from the post she never assumed due to health reasons.

The senator has weighed in on foreign policy matters, including the Philippines’ territorial row with China, Russia’s annexation of Crimea, and the Philippine-US military agreement.

In June, she submitted to the Supreme Court a draft resolution expressing “a strong sense” of the Senate that the military-to-military agreement between the Philippines and the US is “invalid” without the approval of the Senate.

This is also the contention of petitioners criticizing the lack of transparency in the signing of the Enhanced Defense Cooperation Agreement, the 10-year treaty which expands US military presence in the country by allowing it to build facilities inside Philippine bases, and to preposition their defense assets there.

Santiago has also called for the scrapping of the Visiting Forces Agreement – which allows rotation of US troops in the country – because, according to her, it is a “failure” and a “historic document of inequity between a colonizer and its former colony.” 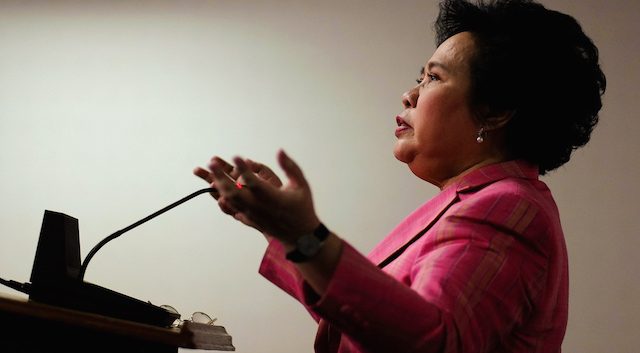 On the same day that the execution of overseas Filipino worker (OFW) Mary Jane Veloso was delayed, Santiago filed a bill that seeks to expand the legal assistance fund managed by the Department of Foreign Affairs.

In 2010, Indonesia sentenced the 30-year-old Veloso to death on charges of drug smuggling, but she insisted she was framed and duped into unknowingly acting as a drug mule.

Santiago slammed the government for failing to immediately provide lawyers for Veloso.

“If the country is to continue to allow the export of our labor force, it is imperative that we do not abandon distressed OFWs to life behind bars or even death without giving them the competent and timely legal assistance they need and deserve,” she said.

To prevent more cases similar to Veloso’s, Santiago said the country needs to put in place “stronger safeguards” for OFWs.

She has filed resolutions seeking inquiries, in aid of legislation, into issues of OFWs, including:

Santiago is also chair of the Senate committee on constitutional amendments and was one of 12 senators who signed a committee report that considers the proposed Bangsamoro Basic :aw (BBL) unconstitutional.

In the committee report, Santiago maintained that the Constitution would need to be amended to accommodate the current draft of the BBL.

“The Bangsamoro has much merit, but its promulgation requires constitutional amendment or revision; mere legislation will not suffice, and will spark Supreme Court litigation,” said the report.

Santiago argued against granting the Bangsamoro exclusive powers and the use of natural resources found in the area. She also criticized provisions regarding the capacity of the Bangsamoro to raise revenues, as well as the proposed parliamentary form of government and how it would function alongside the national government.

But she clarified that it is not her intention to undermine the Bangsamoro peace deal. Her goal, she said, is to ensure that the BBL “will be able to stand scrutiny in the Supreme Court.”

Meanwhile, on the January 25 Mamasapano clash, Santiago criticized key players in the tragedy for not telling the “whole truth” during the Senate hearings on the deadly encounter.

“What does that say of their military organization? If they cannot even conduct simple intelligence gathering activities, they are not even capable of being treated as parties to the peace process,” she said.

Santiago was among the 20 senators who signed another Senate committee report that tagged President Benigno Aquino III as “ultimately responsible” for the Mamasapano tragedy.