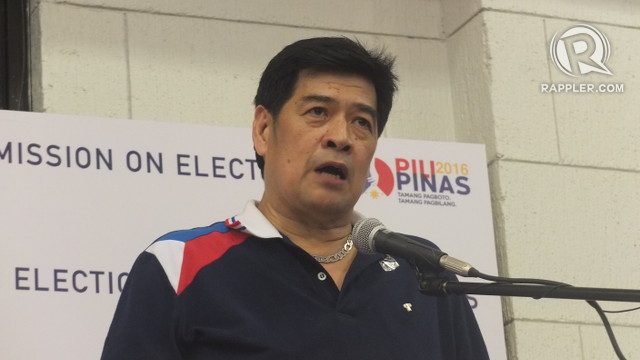 MANILA, Philippines – Political party PDP-Laban (Partido Demokratiko Pilipino-Lakas ng Bayan) fielded, at the last minute, their candidate for president of the Philippines: Martin “Bobot” Diño, the chairman of the Volunteers Against Crime and Corruption (VACC).

He filed his certificate of candidacy (COC) in the Commission of Elections (Comelec) office minutes before 5 pm on October 16, the last day for the filing of candidacies.

He mentioned his experience as VACC chairman and previous stint as a barangay captain in Quezon City. He also said he has been a member of the party since 1982 when he served as a trainer.

His candidacy fuels speculation that this might be a PDP-Laban strategy to ensure the candidacy for president of one of its members, Davao City Mayor Rodrigo Duterte.

Under Comelec rules, a candidate under a party may withdraw and be substituted by another member of the same party.

But Diño denied this had anything to do with his candidacy. He said he had planned to run for president “a long time ago.”

Comelec Chairman Andres Bautista said the “non-extendable” deadline for substitution is on December 10, 2015.

Other requirements would also have to be met.

“There has to be a new Certificate of Nomination and Acceptance (CONA) to the one who will be substituting and that the person [who filed first] has to withdraw and the other one has to accept,” he said.

But moments later, Duterte said in a dzMM interview that he would not agree to be the party’s substitute.

“Wala na yang substitute-substitute. Hindi ako pang-substitute, pang-original ako,” he said. (There will be no substituting. I am not a substitute, I am an original.) – Rappler.com