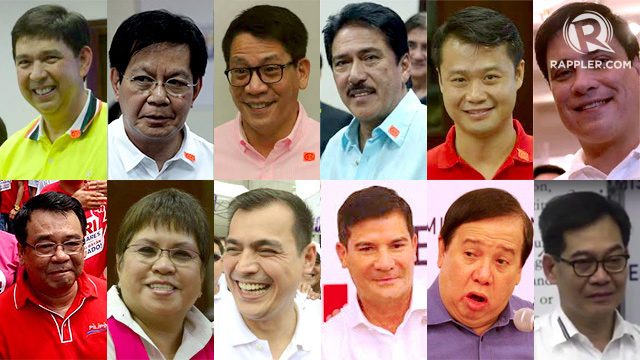 MANILA, Philippines (UPDATED) – The tandem of Senators Grace Poe and Francis Escudero will formally announce their complete senatorial lineup on Thursday, October 29, according to 4 Rappler sources.

Three senatorial candidates and one staff of Poe confirmed the date to Rappler.

Escudero earlier said they would announce it on Monday, but an informed insider said not all senatorial candidates are available on October 26.

The event will be held at the Club Filipino in San Juan, the same venue where Escudero declared his vice presidential bid last month.

Running as independents, Poe and Escudero’s slate is composed of politicians from different political parties. As Rappler earlier reported, half of the slate are candidates shared with the administration and opposition.

According to two sources who requested anonymity but are closely working with Poe’s senatorial slate, the last name to complete the lineup is ACT-CIS partylist Representative Samuel Pagdilao, also a former chief of the Criminal Investigation and Detection Group.

However, as of the evening of Saturday, October 24, a source from the opposition said senatorial bet and UNA guest candidate Susan “Toots” Ople is also part of the Poe-Escudero lineup. The same opposition source said Ople would attend Thursday’s event.

While it is unclear who she is replacing in the list, Ople neither denied nor confirmed the information and said the announcement should come from the tandem.

So far, the 6 senatorial candidates running exclusively under the Poe-Escudero tandem are the following:

Gatchalian, a member of the Nationalist People’s Coalition (NPC), widely believed to be supporting the tandem, confirmed his membership in the lineup in a press conference last week. He was also present in Poe’s last meeting with the NPC. His brother, Valenzuela City Mayor Rex Gatchalian, is the campaign spokesman of Poe.

“As far as NPC is concerned, majority of the members are inclined to support the Grace-Chiz tandem. Therefore, NPC senatorial candidates will be included in their slate,” Gatchalian said in a text message to Rappler on Tuesday, October 20.

Although a member of the ruling Liberal Party, Pasig Representative Roman Romulo is not part of the administration slate. He declared his support for Poe when he filed his certificate of candidacy on October 14. He was also present in Poe’s last meeting with the NPC and in Poe’s visits to Nueva Ecija, Dumaguete, and Roxas City.

In a press conference on October 20, Romulo defended Poe from critics who say she is not a natural-born Filipino. He said it was administration standard-bearer Mar Roxas’ grandfather who said foundlings are protected by the law.

Actor and former Makati Vice Mayor Edu Manzano, according to two Rappler sources privy to the senatorial arrangements, is running under the Poe-Escudero tandem. The independent senatorial bet said during his COC filing that he would address the issue of excessive taxation and improve the country’s education system.

Rappler tried to reach Manzano for confirmation but did not get any response. One of the 2 sources said Manzano earlier promised Poe that he would not preempt the official announcement.

Colmenares was the first senatorial bet to be formally endorsed by the tandem. He said he is running because the Senate needs a “fighter”, adding he would continue the fight for the poor.

“Bakit ako tatakbo? Tatakbo ako sa pagka-senador dahil kailangan ng fighter ng bayan sa Senado,” Colmenares said during a short speech after his filing. (Why will I run? I will run for senator because the nation needs a fighter for the country in the Senate.)

Kapunan, who is a well-known lawyer of controversial figures such as alleged pork barrel mastermind Janet Napoles, said she is running as the people’s “ticket of hope.”

Kapunan, who is running under the Aksyon Demokratiko party of the late senator Raul Roco, was the 3rd senatorial bet formally endorsed by Poe and Escudero.

She said she will run under the platform of “honest government; opportunity for all, selectivenes to none; peace and prosperity; and education and environment in a sustainable development.”

Pagdilao, a police officer for over 37 years, said peace and order will be on top of his legislative agenda.

“Ito po yung aking ino-offer sa ating mamamayan. Ako po si Samuel Pagdilao; kay Sir Chief, safe ka (This is what I can offer to our citizens. I am Samuel Pagdilao; with Sir Chief, you’re safe)!” he said, referring to the character of Richard Yap in the popular daytime television drama, Be Careful With My Heart.

The senatorial bet is the brother of National Capital Region Police Office (NCRPO) chief Joel Pagdilao, who made headlines following the very dramatic conflict between factions in the Iglesia ni Cristo and the Manalo family. (READ: Iglesia ni Cristo drama: Did police do their job?)

When asked by Rappler about his inclusion in the ticket, Pagdilao neither confirmed nor denied it. “Let’s please wait for the official announcement to be made next week. Thanks much Poe,” he said in a text message.

The other half of the senatorial lineup is composed of old faces in politics.

The Manila vice mayor, who is running under Puwersa ng Masang Pilipino of mayor Joseph Estrada, was formally endorsed by Poe and Escudero during the ceremonial launch of his senatorial bid.

Moreno is also an “adopted” candidate of the Miriam Santiago-Bongbong Marcos senate lineup.

Like Gatchalian, Sotto is a member of the NPC, widely believed to be supporting Poe and Escudero. He said he is an “official” candidate of the Poe-Escudero tandem but is also a guest candidate of UNA.

Sotto earlier said he is supporting Poe and Escudero. After all, he was the campaign manager of FPJ’s failed presidential bid in 2004. Things, however, changed when his best friend Senator Gringo Honasan decided to run as Vice President Jejomar Binay’s running mate in 2016, against Escudero.

The former senator believes experienced candidates like himself will strengthen the “weak field” of choices. (READ: Gordon: ‘Country isn’t working’)

He ran for president in 2010 but lost. He then ran for the Senate in 2013 under the United Nationalist Alliance but lost again.

Gordon is running under his own political party Bagumbayan but said he is a guest candidate of both the Poe-Escudero and UNA slates.

A former Olongapo mayor and chairman of the Subic Bay Metropolitan Authority, Gordon told Rappler he wants to decongest Manila by dispersing industries throughout the country, and maximizing the use of Clark airport.

The chairman of the Philippine Red Cross plans to increase the budget for infrastructure spending, and to promote the development of Muslim Mindanao.

Like Gordon, Zubiri was a 2013 official UNA bet who is now a guest candidate under the Binay and Poe slates. The former senator resigned in 2011 after witnesses came out to expose fraud in the 2007 senatorial race against Senator Aquilino “Koko” Pimentel III, but Zubiri denied having a hand in the cheating.

Zubiri then ran under Team Unity, the slate of former president Gloria Arroyo, who was believed to have cheated Poe’s father, Fernando Poe Jr, in the 2004 presidential elections.

As a guest candidate of both Poe and UNA, he shares Poe’s and Binay’s advocacies to reduce income taxes, and to ensure job generation. Echoing Poe, Zubiri said he wants a food-for-school program to help malnourished children.

Lacson, who is part of the LP slate, earlier admitted to Rappler that Poe met with him twice to “offer to adopt [him] in her senatorial slate.” Lacson said that he considers it “a huge privilege, if not an honor to be adopted by the current leading aspirant for the presidency.”

“No conditions were imposed by Senator Poe, nor did I ask for anything except for a request to support an anti-corruption bill I intend to file in case I get elected again in the Senate,” Lacson said.

Poe earlier said Recto would be a good addition to their senatorial slate because of his expertise in budget and finance. While Recto, an LP senator and member of the administration lineup, denied knowing his inclusion in the slate, he said he would “thank” them if he would be included in it. He said he has worked with Poe for 3 years and with Escudero for 17 years.

“We know each other and share many advocacies together. We are friends. I wish them both well,” Recto told Rappler in a text message. – Rappler.com