Presidential bets on taxes, infra and the charter 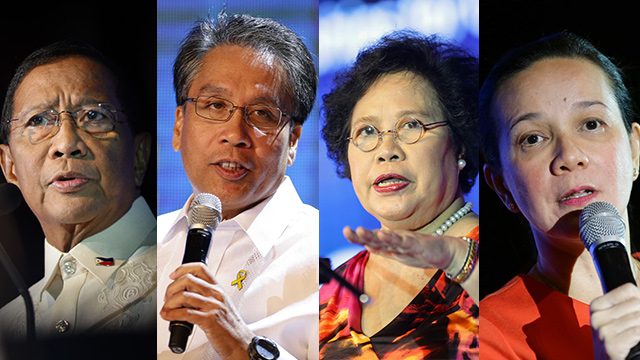 MANILA, Philippines – After President Benigno Aquino III hailed economic growth under his watch, how will the next Philippine leader steer business and industry?

The candidates delivered speeches and answered questions on proposed laws to reduce income and corporate taxes, addressing the Philippines’ infrastructure gap, and liberalizing the economy. The presidential bets were also asked about issues specific to their campaign that cast doubt on their competence for the top government post.

Initially meant as a debate, the event ended up as a one-on-one forum after Binay asked that the format be changed. Poe initially begged off from the forum but showed up in the afternoon, and apologized for what she called a “misunderstanding” and “miscommunication” involving her schedule.

The Philippine Chamber of Commerce and Industries (PCCI) organized the event, with journalist Coco Alcuaz of the International Business Times as moderator.

Where do the candidates stand on key economic issues? Here are their responses:

Alcuaz asked the candidates whether or not they support the bill of Senator Juan Edgardo “Sonny” Angara and Marikina Representative Miro Quimbo to compress the net taxable income brackets, and to lower tax rates, especially for low and middle-income earners. (READ: Is the Filipino middle class over-taxed?)

She said: “Malacañang must stop meddling with the Bureau of Customs (BOC). Corruption in the BOC will cease only if it is not tolerated by public officials.”

He said, “We are the second highest [in the region] in income tax. You are depriving our fellow Filipinos of money that they can use.”

Roxas earlier said those calling for the reduction of income taxes should also be mindful of the government services that could be cut as a result. (READ: Roxas on lower taxes: But what programs will suffer?)

She also disagreed with Roxas’ argument that cutting taxes could slash government services.

“From 2011 until the present, we have about P600 billion in unspent fund in the government and reducing taxes will only take away about P30 billion, so when they say what programs we have to cut, we don’t even have to cut programs, we just have to be more efficient in being able to roll out our projects so that more opportunities will be created,” she said.

The Philippines’ outdated, dilapidated and congested airports, ports, bridges and roads hamper economic growth. Candidates faced questions on how they intend to address the problem, and their views on the Aquino administration’s Public-Private Partnership Program (PPP).

“These projects will be done simultaneously. Some will be done on pure PPP, some hybrid type (government will finance the construction and then will bid out the management and maintenance of the project after construction), and some by government through the usual public procurement procedure. In order to make the facilities affordable to citizens, the government will not require a premium from winning contractors,” she said.

“What is important is monitoring and supervision. This is where we are weak,” Binay said.

“This has never happened in generations. Which is why for all of you business people who have committed to the Philippines, believed, put your money where your mouths are and invested in the Philippines all these years, I am confident in saying that times are good,” he said.

“Let’s not just look at what we have today but look and predict out what the future population will need not just now but in years to come,” she said.

The Belmonte resolution seeks to add the phrase “unless otherwise amended by law” to constitutional provisions that specify 40% limits to foreign ownership of land and business, including the management of media, franchises of public utilities, and ownership of educational institutions.

“I don’t know if the young people will agree to the Belmonte proposal because it makes the Constitution at the mercy of politicians,” she said.

Roxas said there was an impression that doing so would be a “panacea” to the country’s problems.

Instead, Roxas thinks reducing red tape and bureaucracy would be a better way of increasing the country’s FDIs. He said “common sense solutions” are needed in cutting down long processes.

“Hooray for common sense, right? It’s not so common,” he quipped.

“In the ease of doing business we have improved quite a bit, but it takes about 15 steps to start a business in the Philippines while in Thailand it just takes 4 steps,” she said.

Alcuaz asked specific questions to each of the candidates about businessmen’s concerns regarding their campaigns. The presidential bets have different perceived weaknesses, ranging from health, corruption, to incompetence and inexperience.

She said: “When I assume office, I will hit the ground running. I will also hit other people in the vicinity.”

On the issue of the Metro Rail Transit Line 3 (MRT-3), Roxas pinned the blame on the “original sin” of the contract struck between the government and the Sobrepeña group. The government has since ordered new carriages for the dilapidated MRT-3.

A “severe lack of engineers” in government makes it difficult not only for both government and PPPs to push through smoothly.

Roxas rejected the notion that “indecision” on the part of the government is to blame for underspending and delays in infrastructure.

“It’s hard to respond to a generality,” said Roxas, before detailing how he rejected a MRT3 proposal that would have put the Sobrepeña group at a supposedly unfair advantage. He said he was decisive in turning that down.

“They say that my resumé is quite lean, compared to the others in terms of my length of service in the public sector, My resumé is lean enough that I don’t have the added baggage that is not necessary to be able to be successful in government,” she said.

Another issue that hounds Poe, a foundling who was adopted by two movie stars, are questions over her residency and citizenship but these were not asked during the PCCI forum.

In a chance interview with reporters after the forum, Poe reiterated that the issue against her is a case against all foundlings who stand to “lose their citizenships” should she be disqualified. – Rappler.com