Bongbong Marcos: Aquino must move on The son and namesake of the late dictator Ferdinand Marcos said the electoral victory of members of his family showed that Filipinos already forgave the Marcoses.

In an interview on ABS-CBN’s Bandila on Tuesday, October 27, Marcos was asked whether or not Aquino should move on, and the senator said, “Yes.”

He also answered in the affirmative when asked if the country already forgot his father’s dictatorship and moved forward. “Siguro yes. Ibinoboto kami eh.” (Maybe yes. We win elections.)

Besides the senator, former First Lady Imelda Marcos is in public office as representative of the family’s bailiwick of Ilocos Norte while daughter Imee is provincial governor.

Senator Marcos spoke hours after Aquino told a forum of the Foreign Correspondents Association of the Philippines that the Marcos children must acknowledge and apologize for allegations of corruption and human rights abuses under their father’s regime.

The President is the son of the late Senator Benigno “Ninoy” Aquino Jr and President Corazon Aquino, fierce rivals of the elder Marcos. Aquino did not directly blame the late Marcos for his father’s assassination in 1983 but said “there was a mode of governance that allowed such a thing to happen.”

Aquino also said he believes that the Filipino people will not allow the Marcoses to return to Malacañang, an obvious reference to Senator Marcos’ vice presidential candidacy in the May 2016 polls.

“I have faith in my bosses, the Filipino people. There’s nothing that has caused me to change the faith that they are able to discern,” said Aquino.

In response, Senator Marcos said his family is not in government for power.

(That is his opinion. We are not out for power but we are merely continuing our service to the country. So returning to power is not the issue to us. What we are thinking is what we can do to improve people’s lives in our country.)

Marcos reiterated that he does not see why he should apologize for the horrors of martial law. He said his father’s administration did not intend the abuses that occurred in the two-decade presidency. (READ: Marcos on dad’s regime: What am I to apologize for?)

(If it was clear that we planned to hurt people or make them suffer, then of course, we will apologize. But the suffering was not the policy of the government. If it indeed happened, that was not the plan of my father’s administration.) 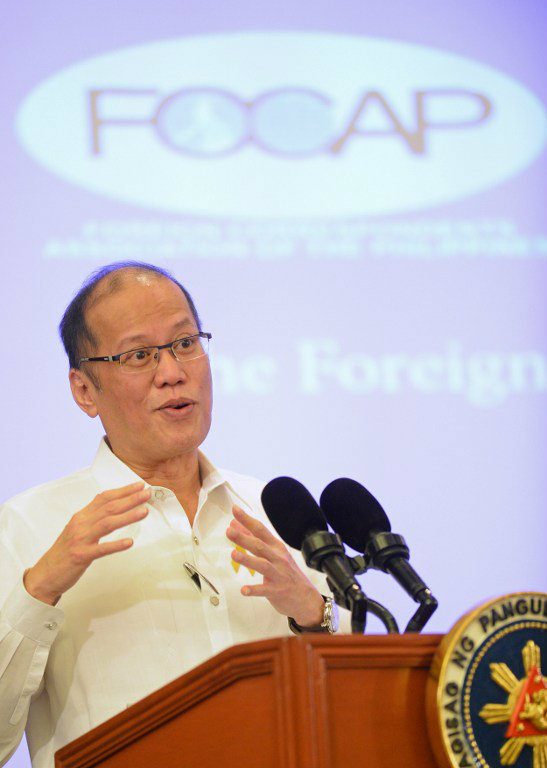 Human rights groups and martial law victims criticized Senator Marcos’ refusal to apologize for the extra-judicial killings, torture, and enforced disappearances under martial law. They vowed to campaign against him.

In the interview, anchors repeatedly asked Marcos about the issue but he did not budge.

He admitted that his father had flaws, “like any other person.”

Marcos said he wants to emulate the late strongman “in his love for his country, in giving his life in the service of the nation, in going after, and fighting for peace in our country.”

The former Ilocos Norte representative added that he wants his father to be buried at the Libingan ng mga Bayani (Cemetery of the Heroes), a controversial proposal that Aquino rejected. The late Marcos’ body is preserved in a mausoleum in Ilocos Norte.

Marcos also addressed questions about the increase in his net worth, as declared in his Statement of Assets, Liabilities and Net Worth (SALN).

“Many of those are assets that we won in cases, so land and other kinds of assets that were added. If you notice in my first SALN, there is a huge part that says ‘undetermined’ because that was in the courts. Some of those were already resolved so I needed to include those in my SALN because the assets are already with me,” he said.

The government accuses the Marcos family of stealing $10 billion from public coffers.

Marcos said his assets were not stolen wealth. “Even those who want to criticize me say that I have the most complete SALN of all officials who file SALNs.”

“I don’t know why he was there. He was there but not for that purpose. That was not what was discussed so maybe no. The answer to your question would be no,” Marcos told Drilon.

Now running for the country’s second highest post, Marcos said he is against corruption and dictatorship.

(History is already there. You cannot change it. You cannot straighten the crooked, and make the straight crooked so let us just leave history to judge him.) – Rappler.com