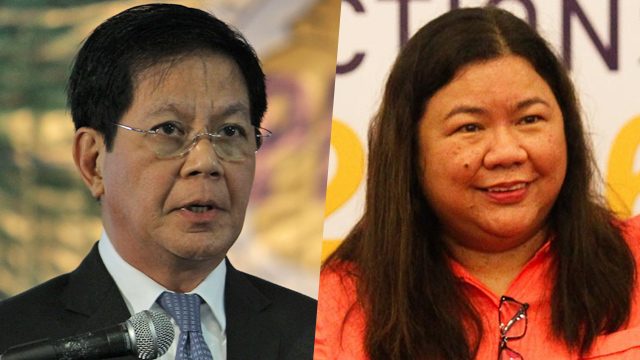 Lacson earlier admitted being dropped from the Poe-Escudero slate to give way to Manzano.

(Kind of blurred, looks like she felt awkward as she did not know how to start telling me. She said, “Edu Manzano is asking for help, he asks to be endorsed.” She also said, “Whichever party you join, even if we are not together, you would still win.”)

But the actor denied this, saying he is not Lacson’s replacement. He told Rappler he already knew he was part of the slate “more than a month ago.”

Lacson, meanwhile, said he met with Poe and husband Neil Llamanzares in their Quezon City home on August 31, and with Poe and Senator Vicente Sotto III in September.

“Yes I am [on their slate]. I have been for quite a while. Senator Lacson may have been misinformed,” Manzano said in a text message.

Manzano further said when he was brought on board in September, “there were still 2 slots remaining.”

Two officials inside Poe’s camp have supported Manzano’s claim that he had been part of the original slate.

While Lacson said Poe’s invitation is a “privilege” that could be taken back anytime, he said his only issue was his sudden withdrawal from the lineup.

(That’s my only issue. Although that’s just a privilege, you invited me and then you suddenly disinvite me.)

Asked why her and Manzano’s versions are different, Poe said she would explain it on Thursday, October 29, when she announces her complete slate at Club Filipino in San Juan City.

On Saturday evening, October 24, or a day after Poe informed Lacson of his exclusion, Poe called Ople and invited her to be part of her slate, said a high-ranking source from the opposition.

Ople, through a text message, then reportedly sought permission and eventually got approval from officials of the United Nationalist Alliance (UNA), where she was first announced as a guest candidate.

Ople supposedly told UNA that her inclusion in the Poe-Escudero slate would increase people’s “awareness” of her.

UNA president Toby Tiangco neither confirmed nor denied this, but said the party does not impose “campaign conditions” on their guest candidates.

Asked if Ople’s inclusion in the Poe slate is final, Sotto, Poe’s ally and also included in the lineup, said “I am told.”

Ople, for her part, refused to comment on the matter, saying the announcement should come from Poe and Escudero.

Unlike Lacson, Poe said she was a struggling senatorial bet when she was adopted by the administration coalition in 2013.

(When I ran before, I was low in surveys but the administration gave me a chance. But this, he will not be inadequate. Also, when Senator Ping and I talked, he still did not know the mechanics, if he would join us in our campaign. There are others who are willing and who have advocacies that we can push for.)

Half of the Poe-Escudero senatorial slate include candidates also running under other tandems. (READ: Poe completes Senate slate, to announce on Oct 29)

According to Poe’s advisory, her slate will run under the banner #PartidoGALINGAtPUSO, a play on her initials, GP. – Rappler.com