Poe’s husband to renounce US citizenship

Nov 4, 2015 6:35 PM PHT
Facebook Twitter Copy URL
Copied
(UPDATED) The presidential aspirant gives the assurance that Filipinos 'will not have an American boy in Malacañang' in the person of her husband Neil Llamanzares 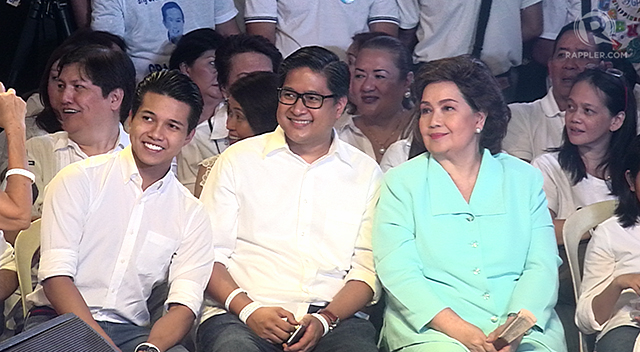 MANILA, Philippines (UPDATED) – Amid questions over her and her family’s citizenship, Senator Grace Poe said her husband would renounce his American citizenship to show “support” for her administration.

Poe’s husband Teodoro “Neil” Misael Llamanzares and their 3 children enjoy dual citizenship – of the United States and the Philippines.

(That’s one of the issues now because this is a political consideration. My husband and I already talked about this. Although he became a US citizen by birth, he would renounce it to erase all doubts and for him to show his confidence in my administration.)

Llamanzares was born to Filipino parents who were then studying and working in the US. Unlike Philippine citizenship law which requires at least 1 parent to be a Filipino, American laws consider as citizens those people born in their country.

Poe did not give other details of her husband’s planned renunciation of American citizenship. She, however, assured the public that Filipinos would not have an “American boy in Malacañang.”

(There are many processes. You have to report your Statements of Assets and Liabilities for the last 5 years. So he will go to the US embassy, we need to collect all documents. You will not have an American boy in Malacañang.)

Rappler initially reported that Llamanzares would renounce his US citizenship once Poe wins.

After the interview, Rappler tried to clarify the timeline with Poe.

In a clarificatory message, the senator’s office said Llamanzares “is currently in the process of renouncing.”

“He will file his application once all pertinent documents have been gathered in compliance with the renunciation process. For the record, Mr. Llamanzares’s renunciation of his American citizenship is not dependent on whether Grace Poe becomes president, as the article seems to suggest, but is predicated on the fact that the Philippines is their place of domicile and work,” the statement said.

As for her kids – Brian, 23; Hanna, 17; and Anika, 11 – Poe said she would not force them to do anything for her. After all, she said, her two daughters are still minors.

Her son Brian was born in 1992 in Washington, DC. Her two daughters, meanwhile, were born in the Philippines in 1998 and 2004. (READ: TIMELINE: Grace Poe’s citizenship, residency)

(Brian is already 23 years old. As a parent, I already talk to him about this. I told him not to decide solely for me. As a parent, you would let your child make his own decision.)

Poe maintained that having family members who are also US citizens is not a threat to the Philippines. After all, she said, there are Supreme Court justices and a former President who has either a husband or children who are US citizens. – Rappler.com

Editor’s Note: In an earlier version of this report, we said that Mr. Llamanzares will renounce his US citizenship if Grace Poe wins, based on the senator’s statement that it would be done “in support of my administration.” It has since been corrected to reflect their clarification that her husband is in the process of renouncing his US citizenship.