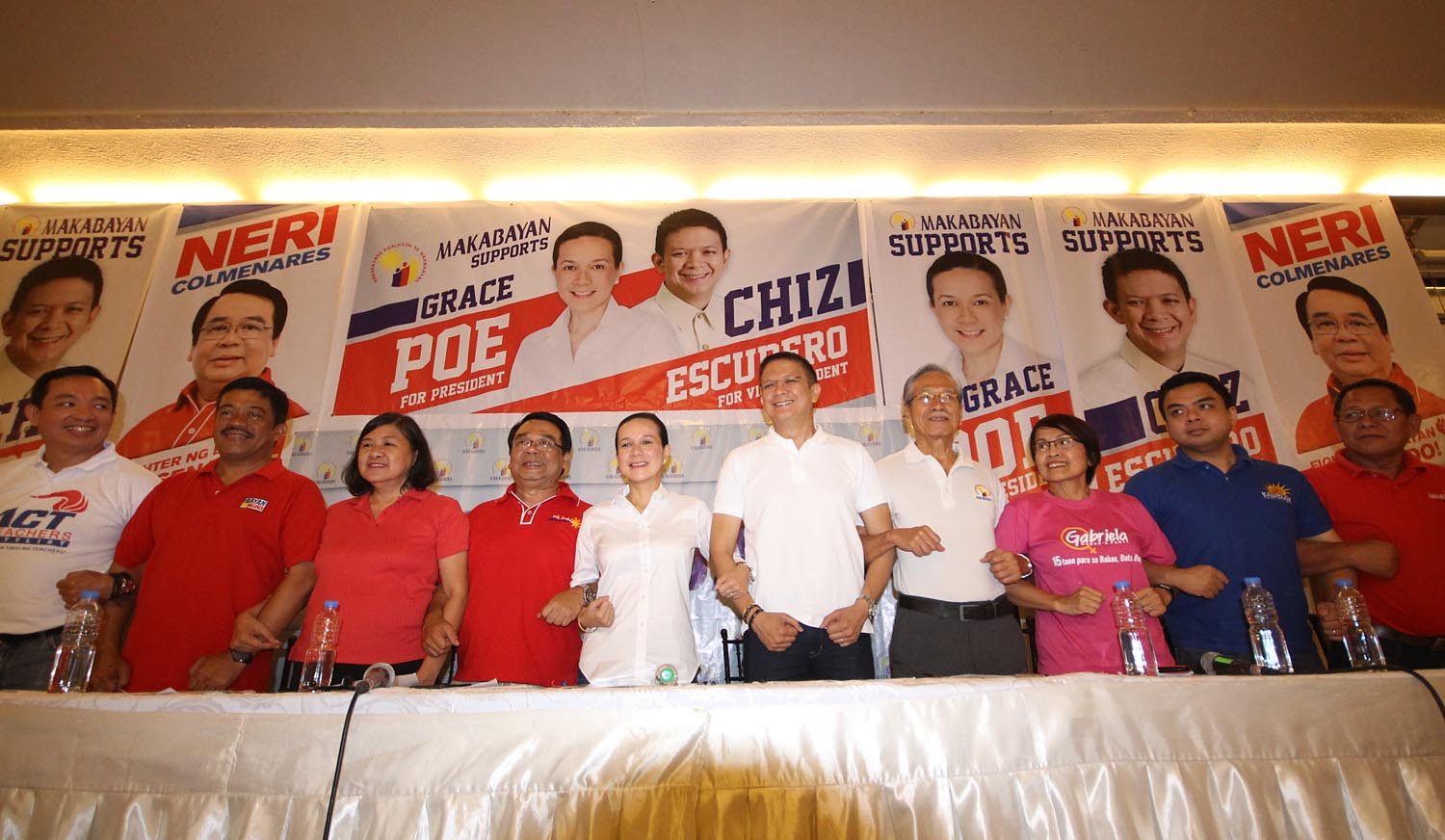 Facebook Twitter Copy URL
Copied
The bloc, known for its nationalistic ideals, responds to citizenship and competence questions against Poe

While Makabayan executive vice president Teddy Casiño said the bloc only decided on Wednesday, it was an expected move, as Poe and Escudero had endorsed the coalition’s senatorial bet, Bayan Muna party list Representative Neri Colmenares, in September.

The leftist bloc was all praises for the tandem, saying they have long worked with the two senators.

(Grace and Chiz’s openness towards the progressives is admirable. While there are many similar points in our platform, we acknowledge there are also differences. Makabayan will continue to dialogue with the two so we can build on our unity and cooperation for the benefit of the masses and the country.)

In a symbolic move, Poe and Escudero also signed an alliance with the coalition, with a 9-point agenda to “address the needs and goals of the country.”

In defense of Poe’s citizenship, capabilities

The bloc, widely known to be pushing for nationalistic ideals, defended the neophyte senator amid citizenship allegations against her.

While Makabayan continuously hit President Benigno Aquino III and administration standard-bearer Manuel “Mar” Roxas II for being supposed strong US allies, it said Poe, a former US citizen, is a true Filipino because of her pro-poor platform.

Makabayan stands by the presidential polls front runner, even as critics say Poe lacks the experience to lead the nation.

(More than the legal aspect, Poe’s platform on poverty and the masses is more Filipino than the program and record of President Aquino and Mar Roxas, who are the ultimate lapdogs of the US.)

Poe is facing at least 4 disqualification cases before the Commission on Elections, all on her presidential bid in 2016.

In just 3 years in office, the bloc said Poe had pushed for the passage of the controversial Freedom of Information bill and the Senate investigation on the botched Mamasapano operation.

Poe, for her part, said the coalition has been with her since 2005, during their fight for the supposed victory of her late father Fernando Poe Jr in the 2004 presidential elections.

(No doubt that the 3 years Grace Poe served as a legislator is more distinct than the record of Aquino as congressman and senator.) – Rappler.com