Duterte on presidency: A gamble for my freedom 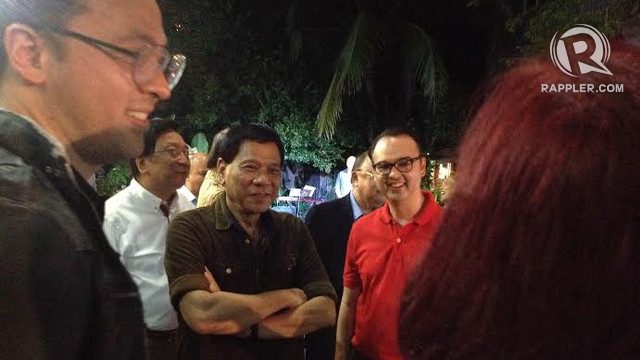 MANILA, Philippines – “You are asking me to gamble for my freedom,” said Davao City Mayor Rodrigo Duterte to the Cayetano family and their guests on Monday night, November 9.

He was speaking as a guest of honor at the 45th birthday party of Senator and vice-presidential aspirant Alan Peter Cayetano in their home in Taguig City.

What was supposed to be Cayetano’s birthday celebration became more like another event to convince Duterte to run.

Before Duterte spoke, he had been serenaded with a song blatantly convincing him to run for president.

“I am really at a loss for what to say but let me just say this to you,” he said to the guests when asked to speak after the song.

“What makes me relevant to all of you and to the people outside? Anong kahulugan ko sa buhay ninyo? (What meaning do I have in your life?)” he asked.

After repeating that he has no plans to run for president, he elaborated on his state of mind:

“I need it [presidency] like a hole in the head. As I said, I have enough accolades to last me a lifetime. Pero pag linagay niyo ako diyan, pag linagay ako ng Diyos diyan (But if you put me there, if God puts me there) because I said it’s a matter of destiny. 10% really is my decision, but whatever it is, the 90% belongs to God.”

He had earlier said he is 10% sure of not running but he would leave the 90% to God’s will.

The reason Duterte gave for his refusal to seek the presidency? Fear of disappointing those who believe in him.

“Kung ilagay mo ako diyan (If you put me there) and after 6 years I will be back here, I would say, ‘My beloved countrymen, I did my best but my best was not good enough,'” he said.

He emphasized that the “limitations” of the presidency would make it certain he would be a disappointment. (READ: Duterte: Filipinos not yet ready for my leadership style)

“I’ll ask you, how? Six years, present structure. The presidency, it is not without limits, that’s the Constitution,” he said, adding that the present structure “doesn’t want me to have so many doors, so many windows.”

Not one to fear drastic solutions for drastic problems, he said his best efforts would only lead him to the jail cell.

“If the Lord puts me there, I would not settle. You will regret it. I will not just sit there and then after, here comes the police because I will really face cases,” he said in a mix of English and Filipino.

He repeated that his presidency would likely be a dictatorship leading to a federalist form of government. (READ, WATCH: Duterte, his 6 contradictions and a planned dictatorship)

After the popular mayor spoke, it was Cayetano’s turn on the microphone.

The birthday celebrant dedicated his final birthday message to convincing Duterte to change his mind.

(What I always tell people, Mayor, choice. The Lord has a plan for us and he doesn’t lie but the right choice lies with us.)

Duterte just sat quietly while listening to the especially written song and Cayetano’s speech, with his hand covering the side of his face, a characteristic gesture.

Cayetano continued: “The point, Mayor, is that we don’t have a choice. We keep telling people we want real change but they’re not given real choices. Give us a choice for 2016.”

The rest of the gathering – composed of government officials, businessmen, lawmakers, showbiz personalities, and athletes – were similarly supportive issuing calls and cheers.

This is the latest gesture from Cayetano in his “courtship” of Duterte, widely seen as a formidable presidential candidate if he were to run.

Cayetano declared his own vice-presidential bid in Davao City, Duterte’s hometown, to seek his endorsement. He has made it no secret that he wants the popular Duterte as a running mate. – Rappler.com