The Leader I Want: Bongbong Marcos’ to-fix list for 2016 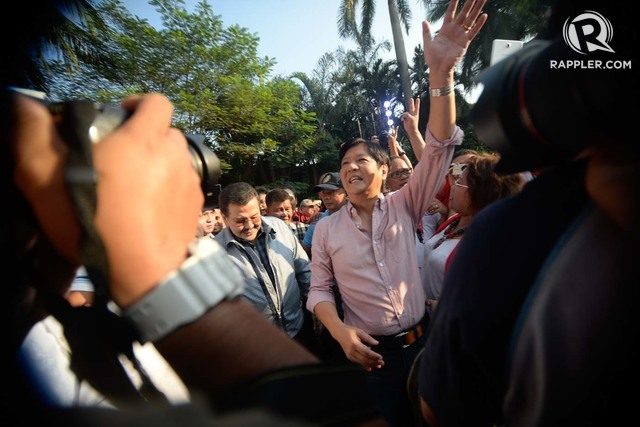 MANILA, Philippines – The son of one of the Philippines’ most infamous presidents is ready to make his own mark.

Ferdinand “Bongbong” Marcos Jr is seeking the vice presidency in the 2016 elections, the highest elective post any Marcos has gunned for since the regime of their patriarch, the late dictator Ferdinand Marcos Sr.

The younger Marcos says he’s more than ready to move on from the memories of those years and that the rest of the Philippines should be too.

He says he would rather focus on the overwhelming problems the country faces and the modern-day solutions to solving them. (READ: Marcos son on VP bid: ‘I will lead a revolution’)

His mother, former First Lady Imelda Marcos, wanted him to run for president, but Senator Marcos said it was not yet the right time. Instead, he has chosen to throw in his lot with presidential candidate and fellow senator Miriam Defensor Santiago.

Marcos has chaired two key Senate committees: the committees on local government, and on public works. (READ: 9 things to know about Bongbong Marcos)

He has previously said that, if elected, he would like to be transportation secretary, believing that fixing the country’s infrastructure is critical to its growth.

As part of Rappler’s #PHVote “The Leader I Want Series,” we look at Marcos’ stand on issues the next vice president will have to face: corruption, social inequality, climate change and disasters, foreign policy, overseas Filipino workers, and peace in Mindanao.

Good governance will take centerstage in the Miriam-Bongbong platform, said Marcos during a press conference. If elected vice president, he said he would promote meritocracy in government, doing away with appointments based on “favoritism,” he once told a gathering of businessmen.

“The next leader should surround himself or herself with the best of the best in the Cabinet,” he added.

Marcos supports the proposed Freedom of Information Act, saying it is “a tool to build trust” and encourage government to “carry out its mandates honestly, competently, and with due regard to all stakeholders.” 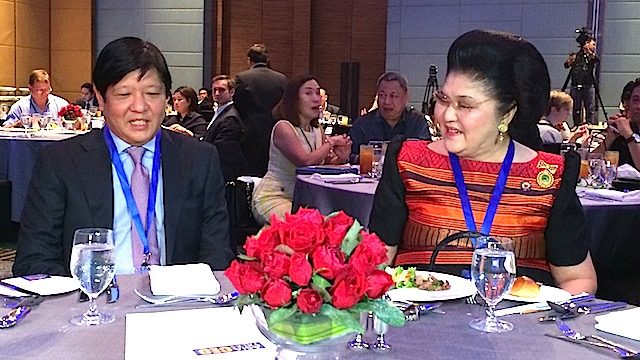 Citing the “golden age” of agriculture during the years his father was in power, Marcos said he too would make the sector a key part of his economic program. The two-time governor of Ilocos Norte said he used his time as local chief executive to promote rice, corn, and livestock production in the province.

With interests of farmers in mind, he filed Senate Bill 14 or the National Irrigation Program of 2013, which seeks to irrigate 95% of irrigable lands in 3 years.

He also has his eyes set on cracking down on unfair labor practices, like contractualization. Among his priorities would be ensuring the affordability of prices of basic goods and addressing lack of jobs within the country.

He authored a Senate version of the Children’s Emergency Relief and Protection Act (pending in the House of Representatives), which seeks to give immediate special assistance to children during calamities.

He also authored one Senate version of the PAGASA Modernization Act, seeking to upgrade the equipment of the state weather bureau and increase the salaries of its personnel. Marcos has been vocal about tracking rehabilitation efforts after Super Typhoon Yolanda (Haiyan) and Typhoon Ruby (Hagupit), calling for a Senate probe into how foreign funds and donations have been used by the government.

If elected, he said he would look for ways to “accelerate” the process of rehabilitation.

“What do we need to do to accelerate the process? It’s making the system better, make the process work more efficiently,” he said during a Senate press conference.

When it comes to the Philippines’ territorial dispute with China, Marcos would rather talk than fight it out.

Vice chairperson of the Senate committee on foreign relations, Marcos was against the Philippine government’s refusal to China’s offer of bilateral talks during the height of controversy over erected structures in disputed territory.

In settling the issue, Marcos prefers bilateral agreements to other options like war and adjudication.

“We do not want war. Arbitration is not one that is going to be recognized by the Chinese. So it has to be negotiations,” Marcos said.

The Philippines is currently pursuing a case against China which it lodged with an international tribunal. Marcos has shown hands-on involvement with certain OFW issues. Recently, he said he sought assistance from the Chinese ambassador to the Philippines to secure the job of alleged laglag-bala (bullet-dropping) victim and OFW Gloria Ortinez, who hails from Ilocos Norte, his home province.

In 2014, he called on the Department of Foreign Affairs to fast-track the correction of status of OFWs in Saudi Arabia in order to meet a deadline set by the country for the completion of requirements so they would not be charged or deported.

He has also mulled a measure that would require funds of the Overseas Workers Welfare Administration be used to assist OFWs in distress in the form of more lawyers for jailed OFWs or repatriation of abused OFWs.

He opposed the earlier version, first drafted by the Bangsamoro Transition Commission, because he said it was unconstitutional and would lead only to more bloodshed instead of the promised peace.

After holding consultations in various parts of Mindanao, Marcos raised objections to key aspects of the proposed Bangsamoro government, including its power to tax and its possible conflicting rights over key territories and natural resources.

His version, he said, is more inclusive of the interests of other major stakeholders such as the indigenous peoples or Lumad and the Moro National Liberation Front. – Rappler.com