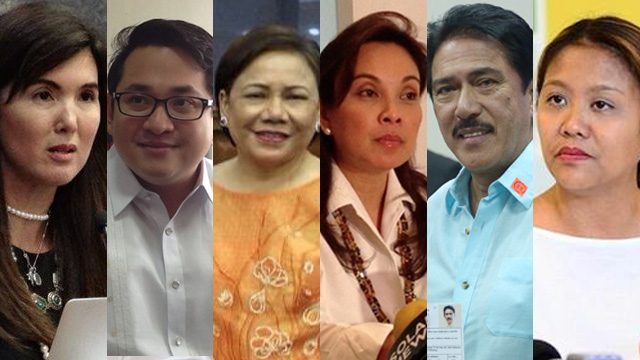 Facebook Twitter Copy URL
Copied
The 6 senators outnumber the 3 SC justices in the Senate Electoral Tribunal, but their vote is not unanimous

This is how Senator Loren Legarda described the meeting of the Senate Electoral Tribunal (SET) on Tuesday, November 17, at Manila Polo Club in Makati City.

There were neither debates nor long-winded discussions. More than an hour past noon, when all 9 members of the tribunal had arrived at the venue, Senior Justice Antonio Carpio asked two questions:

Legarda added: “Who are those not in favor of granting the petition? The 5 of us raised our hands. It’s that simple. And then we said goodbye.”

The decision comes months after losing senatorial candidate Rizalito David filed a petition before the SET seeking the disqualification of Poe as senator.

David argued that since Poe is a foundling, there is a possibility she is not a natural-born Filipino and should have been disqualified as senator.

David’s lawyer Manuelito Luna said they will file a motion for reconsideration before the tribunal on Monday, November 23, after which, SET members will convene again to vote on this motion.

They aim to come up with a final decision on the case before the printing of ballots in December.

The final decision will impact on Poe’s presidential bid in the 2016 elections. To date, the presidential poll frontrunner is already facing 4 disqualification cases before the Commission on Elections (Comelec), with 3 of the petitioners questioning Poe’s natural-born citizenship.

The Constitution of the Philippines requires that those elected as president, vice president, senator, and congressmen be natural-born citizens. Candidates for local posts can be naturalized citizens.

The poll body will likewise decide soon on a separate citizenship case against Poe that was also filed by David. SET sources explained the Comelec may follow the SET decision on the citizenship issue, which would benefit Poe and clear one major obstacle to her presidential candidacy.

The Comelec will still have to decide on the question of whether Poe has met the residency requirement for senatorial candidates, which was not an issue in the SET case.

The senators outnumber the SC justices in the tribunal, 6 to 3, but the lawmakers did not vote unanimously on Tuesday.

“I decided to vote with the justices of the Supreme Court based on the Constitution and the evidence presented,” Binay said in a statement Tuesday. She is the only senator who voted to disqualify Poe, one of her father’s rivals in the 2016 presidential elections.

But Binay reiterated her vote had nothing to do with Vice President Jejomar Binay, or the presidential elections.

The rest of the senators voted to dismiss David’s case. Sotto said they voted in favor of Poe as a recognition of the rights of an adopted child.

“I voted for all the orphans, foundlings, and adopted children in the Philippines. It was not a vote for Grace Poe. A disqualification vote would have serious repercussions on many of our countrymen,” Sotto said in a text message to Rappler.

Sotto is seeking reelection under Poe’s independent party. A member of the Nationalist People’s Coalition, he was a strong supporter – along with Senator Francis Escudero – of Grace Poe’s father, Fernando Poe Jr, when the movie actor ran for president in 2004.

Legarda, for her part, explained that the 5 senators recognize that Poe, as a foundling, is a natural-born Filipino. She, however, assured the public that she studied the facts well and even wrote her own opinion on the case.

(This is important for adopted children who do not know their place of origin.)

Meanwhile, in a 3-page opinion, Aquino said “logic dictates” foundlings are neither naturalized nor stateless, but natural-born Filipinos.

“Foundlings are among the most vulnerable to statelessness and discrimination. Social justice dictates the State should be the first to recognize and ensure that foundlings are able to enjoy each and every right accorded them.”

For him, until the petitioner presents evidence that Poe’s parents are not Filipinos, the presumption of regularity should prevail.

“With the respondent currently unable to submit the results of the DNA tests to prove that she is indeed a natural-born citizen, the presumption of regularity and the presumption of the utmost best for those who have least in life should be upheld and maintained.”

Cayetano refused to give comments for now. She said the case is still “pending,” since David’s camp has the right to appeal.

“But I have a separate opinion explaining my vote which will be made available to the public soon,” she said in a text message to reporters.

Villar has yet to give her comment as of this posting.

In his statement sent to reporters, Luna cited an old case – Lerias vs Mercado – in which the SC warned politicians who are members of electoral tribunals to “resolve each controversy with judicial, not political, integrity.”

“Because of the Lerias doctrine, which position the justices took will be crucial for a reversal by the SC. That’s what we should look at,” he said. – Rappler.com