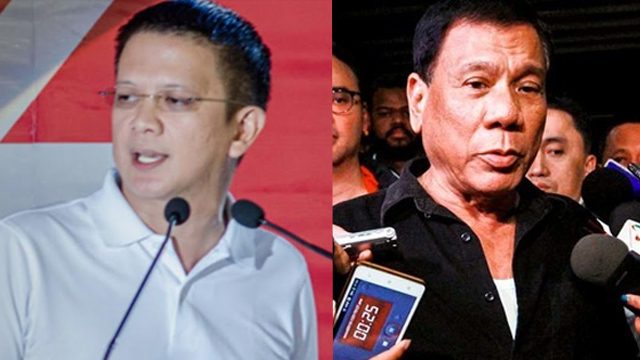 Facebook Twitter Copy URL
Copied
(UPDATED) The Constitution mandates the SET to be the 'sole judge' of all contests on senators’ qualifications, Senator Escudero reminds his running mate's foes

The Constitution mandates the SET to be the “sole judge” of all contests on senators’ qualifications, Escudero reminded his running mate’s critics on Tuesday, November 24.

In a statement directed at Davao City Mayor Rodrigo Duterte, Escudero said Poe’s political opponents who are “mostly lawyers…are assaulting” the integrity of the constitutional body.

(As a  fellow lawyer, I, too, want to respect and fight for the Constitution. It just so happened that we have differing views and interpretation of the Constitution and Senator Grace’s natural-born status.)

Escudero made the appeal a few days after Duterte’s announcement that he would run for president, as he could not accept the SET’s decision on Poe’s case. Duterte earlier called the Poe-Escudero tandem “excellent” but has since changed his tune, now describing Poe as a potential “American president.”

While Escudero reiterated he respects Duterte’s views, the senator called on the mayor “not to belittle” those who do not share his opinion.

The two have been exchanging barbs. Escudero had urged the mayor not to use Poe as an “excuse” to aim for the presidency; Duterte had accused Escudero of “using” Poe for his own benefit, a perennial accusation that the tandem denies.

Escudero again defended his presidential candidate. He said that during her two-and-a-half year stint at the Senate, Poe has shown she has “principles.”

(If there’s a user, there’s always someone who allows himself or herself to be used. And not just because Senator Grace is a woman or political newbie, there has to be someone behind her or someone to dictate on her. In her short experience in the Senate, she has shown she has her own principles – own beliefs that she stands by without relying on any one.)

(It’s clear to Mayor Duterte and myself that someone who’s not a natural-born citizen cannot run for president. Is it right for someone who had pledged allegiance to America to come back here, and run for the presidency? We cannot allow this. This is not drama.)

Cayetano also said Poe should face the issues against her squarely, and not hide behind Escudero’s back.

“Hindi maaari na hindi marinig ang tinig niya lalo na kung gusto niyang maging presidente ng bansa (She has to let her voice be heard if she wants to be president). If this early she is already hiding behind a person, who at best is only muddling the issue lodged against her, what more if she becomes president?” he said.

The camp of petitioner Rizalito David appealed the SET decision on Monday, November 23, saying the tribunal made a “wrong” judgment and that politics ruled over the law.

Lawyer Manuelito Luna said they filed a motion for reconsideration to give “chance” to the 5 senator-members who voted in favor of Poe to “correct” their decisions. – Rappler.com