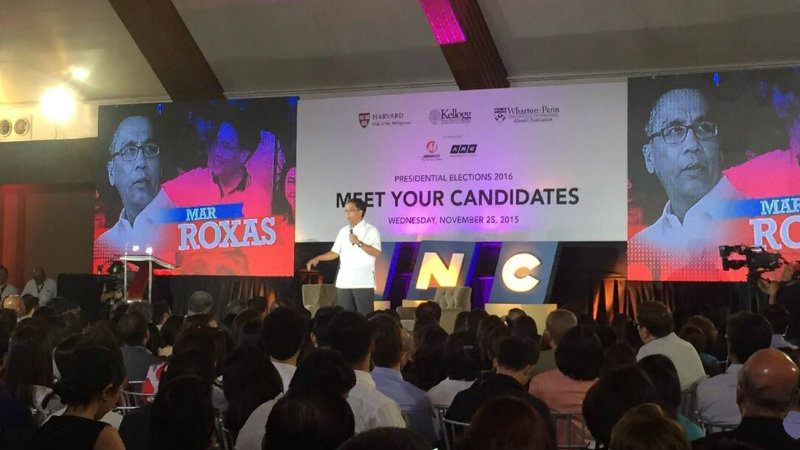 Facebook Twitter Copy URL
Copied
The LP standard-bearer, who was DOTC Secretary for over a year, insists he did what he could given the limitations of a faulty contract

MANILA, Philippines — It’s one of the sticky issues raised against him, but Liberal Party standard-bearer Manuel Roxas II on Wednesday, November 25, insisted he was not remiss in his role as transportation chief years back.

During a “Meet Your Candidates” forum organized by alumni of American business schools such as Harvard, Kellog, and Wharton, Roxas was asked if he thought he did enough during his stint as Department of Transportation and Communications (DOTC) secretary from June 2011 to October 2012.

“I’m confident that we did all that we could do given all that we could do at that time,” said Roxas, who has been blamed for the failures of the department, including a languishing Metro Rail Transit Line 3 (MRT3) and the traffic woes of Metro Manila. (READ: Solving Metro traffic: Terminate various bus franchises, says Roxas)

Before Roxas went onstage, presidential survey front runner Senator Grace Poe was asked whether Roxas “did enough,” based on her Senate committee’s probe into the problems of the MRT.

“I think more could have been done. I think that our people deserved better,” said Poe.

The senator added: “And I think that it’s really a matter of vision, planning, and execution and leadership that could have spelled the difference.”

“It’s very easy, 20/20 in hindsight, you always have a perfect answer, right? But that’s not the way things are. You come across a problem and you solve it to the best that you can,” said Roxas.

As in previous forums and interviews where he’s asked about the MRT3’s problems, Roxas pointed out the “original sin” of the existing contract between the government and the train line’s owner.

“I challenge anyone. This is a contract that started out in original sin. The contract itself was anomalous and the contract binds the government to continue this program,” said Roxas.

The tricky contract and legal debacles between the government and the privately-owned Metro Rail Transit Corporation (MRTC), according to the current administration, has led to difficulty in the acquisition and upgrade of MRT3 facilities.

In the past year or so, the cracks – mostly figurative, some literal – in the train line have begun to show.

Mid-2014, one of the line’s trains crashed into the barriers of its terminal station, injuring passengers. Long lines and glitches have also marred the train line, which traverses through EDSA.

Pressed on how he intends to solve the train line’s problems should he be elected president, Roxas said he would “abrogate” the “anomalous” contract.

The same advice was given President Benigno Aquino III which is why the government is currently buying a new set of trains that are set to arrive by the first quarter of 2016.

“That’s why there’s now an effort to buy out the contract but even that in itself is problematic. Can you imagine, buying out a contract paying the original sinners for this contract to take them out of this cushy position?” said the former DOTC secretary.

The existing contract, Roxas told a room full of entrepreneurs, only allows the operator to buy new trains. The contract also assures the operator of “15% return, dollar dominated, come hell or high water.”

“You tell me whether that’s anomalous or not,” quipped Roxas.

In a chance interview with reporters after the forum, Roxas said should he be elected president, he would ask the government’s legal team to find a way out of the contract through a buy-out, termination, or by filing a case against the MRT3 owner. – Rappler.com