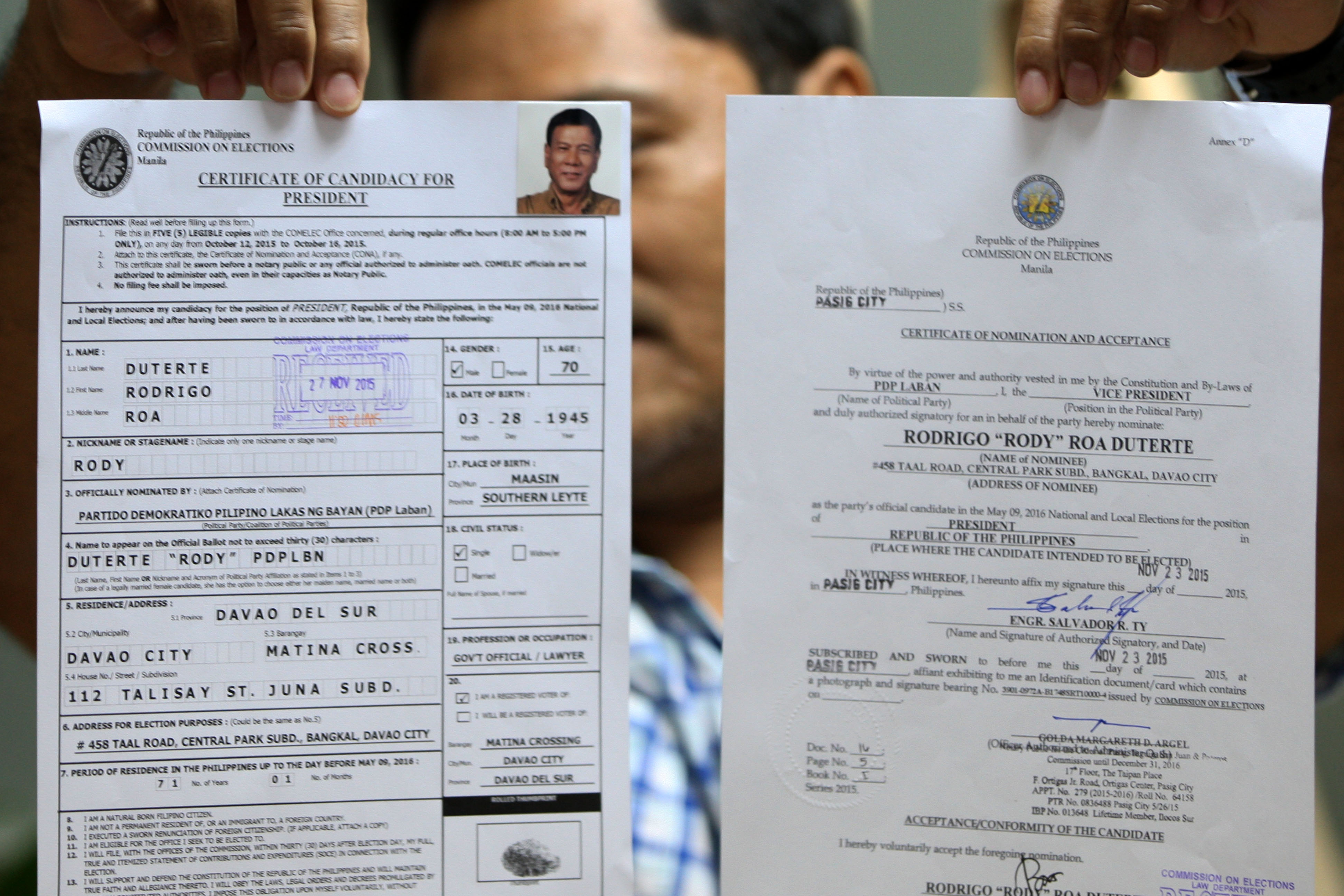 Broadcaster Ruben Castor on Friday filed a petition before the Commission on Elections (Comelec) to declare as null and void the certificate of candidacy (COC) of Martin Diño.

Diño, initially the presidential bet of political party PDP-Laban, later withdrew his COC for president to make way for his substitute – Duterte.

Substituting for Diño, Duterte on Friday filed his COC for president.

Castor said Duterte, however, “should not substitute for Martin Diño whose COC is void, legally inexistent, and without legal effect; hence, substitution shall likewise be void.”

Castor’s claim is based on an error in Diño’s COC. (READ: EXPLAINER: Can Duterte run for president?)

Rappler reported in October that Diño, in his COC, erroneously declared that he is running “for the position of mayor” of Pasay City.

Castor told the Comelec: “It is most respectfully submitted that the Honorable Commission should not allow a travesty of justice and the law, distortion of the truth, and make it legally possible for the Commission to give due course to the substitution of respondent Dino by respondent Duterte for the position of president.”

Castor’s lawyer, Oliver Lozano, clarified that their petition aims not directly to disqualify Duterte. Instead it aims to declare Diño’s COC null and void, the “legal consequence” of which is barring Duterte from substituting for Diño.

PDP-Laban president Senator Aquilino Pimentel III, for his part, brushed off Castor’s petition. “We are not worried. We already know the answer.”

Pimentel said of Castor: “He had 5 days from October 16 to challenge Diño’s COC. He cannot attack Duterte’s COC based on Diño’s COC; otherwise the prescriptive period will be put to naught.”

Duterte’s filing of his COC on Friday ended months of speculation on whether he will run for president.

Duterte, also called “The Punisher,” is known for a style of leadership that reportedly includes executing criminals in Davao City. (READ/WATCH: Duterte, his 6 contradictions and planned dictatorship)

Because of this, Duterte is accused of human rights abuses.

Still, his supporters believe the Philippines needs a strongman like him for president, nearly 30 years after ousting dictator Ferdinand Marcos. – with reports from Pia Ranada/Rappler.com