NPC: Only ‘negligible’ few to move from Poe to Duterte 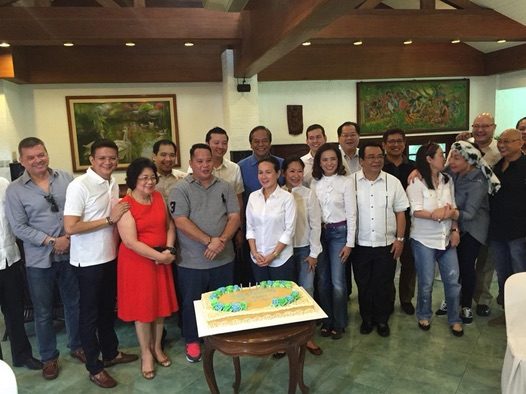 MANILA, Philippines (UPDATED) – The president of the Nationalist People’s Coalition assured the tandem of Senators Grace Poe and Francis Escudero that the party remains “solid” behind them.

Isabela Representative Giorgidi Aggabao, the head of the 2nd biggest political party in the country, shrugged off issues that some NPC members might shift their support to Davao City Mayor Rodrigo Duterte.

Duterte has declared his intention to run for president in 2016, although it remains unclear if the Commission on Elections would allow him to substitute for Martin Diño of the party PDP-Laban due to technicalities. (READ: Duterte faces 1st petition vs presidential bid)

While Aggabao did not discount the possibility of shifting alliances, he said these few politicians would likely come from Duterte’s hometown, Davao City.

“I foresee that there would be crossovers. But they would be negligible I think, confined only to our Davao provinces candidates, if any at all. The support of most NPC remains solid behind Poe-Chiz nationwide,” Aggabao told Rappler on Monday, November 30.

Escudero also shrugged off the possibility of losing allies, now that Duterte has decided to run for president.

“I don’t think so but, then again, in politics anything can happen. We have and will always expect the worst and hope for the best in this campaign,” Escudero said.

While there is no official declaration yet, the NPC is widely believed to be supporting the Poe-Escudero tandem. After all, NPC senatorial bets are running in the Poe-Escudero slate, Valenzuela Mayor Rex Gatchalian is Poe’s spokesman, and NPC Cebu chairman Ace Durano is the campaign manager.

(It’s rare that somebody deviates from the party decision. Let’s wait for the official NPC announcement in January.)

Asked if Duterte is a threat to the candidacies of Poe and Escudero, Aggabao expressed doubts that the people would actually vote for the popular mayor.

“No worry at all. People will listen to Duterte. His coarse language is amusing to many. But at bottom, I doubt it they will vote for him,” Aggabao said.

Duterte, in an event on Sunday night in Taguig, admitted he is a womanizer and that he has killed a few criminals in his city. The public has expressed both amusement and disgust at his pronouncements.

NPC spokesman and Quezon Representative Mark Enverga admitted Duterte’s entry in the presidential race will change the survey landscape from now on.

This is the same prediction made by Poe, who earlier said Duterte would further divide the votes for all presidential bets.

“We are in the belief that Mayor Duterte’s entry will make changes in survey numbers. As to who among the presidential candidates will be affected by his entry in the race, that has yet to be seen in the upcoming surveys,” Enverga said.

While admitting Duterte is a “serious contender,” Durano said it is too early to predict anything.

“Although we are conscious of how the other candidates are doing, we are focused on the strengths and opportunities of Senators Grace and Chiz. We assess the effectiveness of our campaign on a weekly basis. Necessary adjustments will be made as the need arises,” Durano said.

But Senator Serge Osmeña, a veteran of political campaigns, said Poe would be the “biggest loser” now that Duterte is also running.

Citing a Pulse Asia survey he commissioned in September when the mayor shot down plans of a presidential campaign, Osmeña said a big chunk of Duterte’s votes went to Poe.

“Well, because the biggest beneficiary of his withdrawal 2 months ago was Grace Poe, ergo, the biggest loser will be Grace Poe. Noong pag-drop namin kay Mayor Duterte, out of the 17% that he was getting at the time, 9% would go to Grace Poe, tapos iyong balance paghahatian ni Roxas and Binay. So by logical extension, nagtuloy siya, he is going to get from Grace Poe,” Osmeña said in a radio interview on Monday, November 30. – Rappler.com