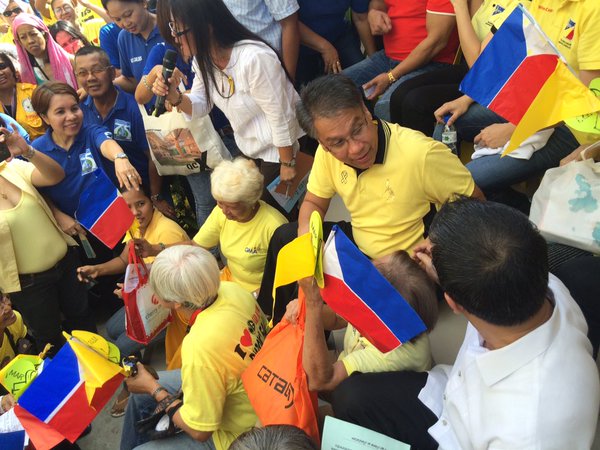 (Each citizen is free to chose which side they’ll align with so everything is okay. There will be more movements to come.)

In earlier interviews with Rappler, former and current LP allies in Mindanao said they would be supporting the candidacy of Duterte, the only mainstream presidential candidate who hails from Mindanao.

A Duterte candidacy, Mindanao officials said, is a “game-changer” in a presidential election that is already crowded. Aside from Duterte and Roxas, there are least 3 more mainstream bets for the presidency: survey front-runner Senator Grace Poe, opposition leader Vice President Jejomar Binay, and Senator Miriam Defensor Santiago.

Roxas seemed unaffected by reports of LP allies jumping ship, pointing out that the elections are not about “personality [cults].”

#PHvote: LP bet @maroxas asked — is there a need for a "loyalty check" among members in Mindanao? WATCH: pic.twitter.com/LXXPZRniOv

As the standard bearer of the ruling Liberal Party, Roxas’ 2016 campaign is centered on the promise of continuing the reforms and supposed gains of the current administration. “Daang Matuwid” is the Aquino administration’s tagline for its transparency, good governance, and anti-corruption platform.

Roxas said LP members have yet to tell him plans to support a different candidate, but should they decide to, the LP standard bearer said it would be “part of our democracy.”