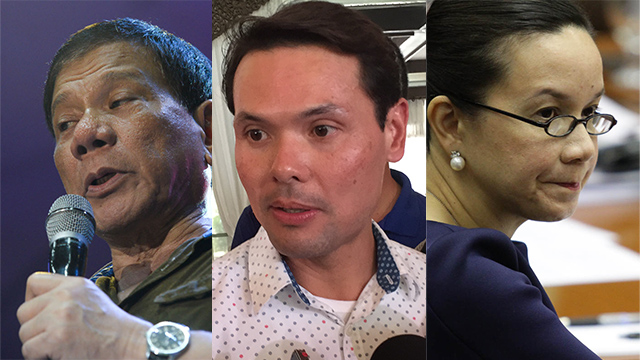 MANILA, Philippines – Some say blood is thicker than water. But in Philippine politics, that’s not always the case.

Durano also happens to be the campaign manager of Senators Grace Poe and Francis Escudero, as well as their senatorial slate.

But for Durano, there is no conflict. After all, he said, Duterte has not approached their local Bakud party in the 5th District of Cebu, in the same way the party has not declared support for the mayor.

“It’s a non-issue for Senators Grace and Chiz. Bakud is known to stand on its commitment no matter what,” Durano told Rappler on Monday, November 30.

In 2013, the political family and their Bakud party forged an alliance with the ruling Liberal Party, with Durano winning a seat in Congress. At the time, the Nationalist People’s Coalition, the country’s 2nd biggest political party, was still a strong administration ally. Now, NPC is widely believed to be supporting the Poe-Escudero tandem.

While Bakud already endorsed LP bets Hilario “Junjun” Davide III for Cebu governor and Agnes Magpale for vice governor in 2016, they are now backing the candidacies of Poe and Escudero for the two highest national posts.

But the front runner in the presidential race said she has no questions on Durano’s support for her, amid his blood ties with the popular mayor.

“I respect and have full trust and confidence in Representative Ace. Our bond is based on our common goals for the good of the country,” Poe told Rappler in a text message.

Her running mate Escudero echoed Poe’s sentiment, saying they have already discussed the issue months ago.

“He is the campaign manager of the Senate slate and in Cebu and part of the campaign central committee that handles our campaign. It is not an issue and we have already discussed this possibility or eventuality even before Mayor Duterte declared [his presidential bid],” Escudero said.

To further prove their point, Poe’s spokesman Rex Gatchalian said that when Poe met with the Duranos and local party leaders in October, it was a “clear” sign of their agreement on “where to take the country.”