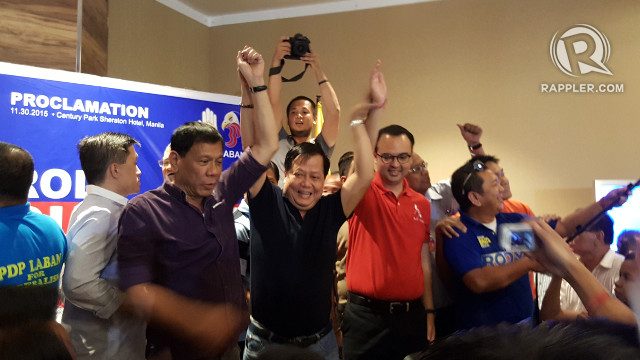 MANILA, Philippines – “I never expected this even in my wildest dreams, never aspired more than the boundaries of the mayorship,” said Rodrigo Duterte as he was formally proclaimed the presidential candidate of political party PDP-Laban on Monday, November 30.

The room of a hotel in Manila was jampacked with his supporters from all over the country – from barangay captains based in Davao City to businessmen in Metro Manila.

“What the party is doing this afternoon along with movements helping Mayor Duterte become president is to proclaim our partnership. Because I heard Mayor Duterte has his heart set on a candidate for vice president of the Republic of the Philippines,” said Pimentel as a form of introduction to Cayetano.

“Too late now to change his papers with Comelec (Commission on Elections) but during the campaign the PDP-Laban will campaign for the team Duterte-Cayetano,” said Pimentel.

Cayetano belongs to another political party, the Nacionalista Party, but he filed his Certificate of Candidacy as an independent.

Though the tandem is final, it’s Comelec that will decide whether the two are candidates for the 2016 elections.

The poll body has also yet to act on a petition that could nullify Duterte’s candidacy.

Pimentel called on all Duterte supporters to work together to ensure Duterte’s victory in May 2016.

“Party members, non-party members, let’s all help each other so our candidate will win for the good of the country,” he said in a mix of English and Filipino.

To many, this day was the culmination of their efforts to convince Duterte to run for president. Some people in the room, including a group of Davao City barangay captains, have been campaigning for him since February 2014.

Though many were disappointed when Duterte said twice he would not run for president, some did not give up hoping, said Sueño.

“So when he announced he is open to the presidency and when he filed his COC (Certificate of Candidacy) for president of the Philippines, many of our people have come alive,” he added.

PDP-Laban’s endorsement of Duterte stems mainly from his support of their advocacy for a federalist form of government in the Philippines.

In a federalist government, regions have more independence in managing their own affairs. For example, Duterte has said he wants 60% of taxes earned by local governments to be used by the LGUs instead of going to the national government.

A federalist government, he said, would also appease separatist groups in Mindanao.

Cayetano, meanwhile, is an advocate of the decongestion of Metro Manila saying there should be more investments made in other parts of the country to spread out economic growth.

Cayetano has said his and Duterte’s causes are compatible with each other.

The senator told Rappler CEO Maria Ressa on November 29 that he was “speechless” when Duterte first indicated they would be running together during the same party where he had announced his intention to run for president.

“[The media] asked him, ‘Sir, is it Duterte-Cayetano?’ And he said yes, and he pointed to me. And I was totally speechless. And for a politician to be speechless, that’s something,” said Cayetano.

Asked why he wants Duterte as a running mate, the senator said that of all the candidates “Duterte stands out among them because he will really change things.”

Also present at the proclamation was Martin Diño, PDP-Laban’s first presidential candidate who later withdrew his candidacy after Comelec said they might declare him a nuisance candidate.

Diño was welcomed to the venue as “ang bayani ng PDP-Laban (the hero of PDP-Laban).”

Diño was largely seen as a placeholder so that Duterte would still have a slot even if he missed the deadline for candidacy-filing. – Rappler.com