Duterte to CBCP: Ask me to withdraw and I will 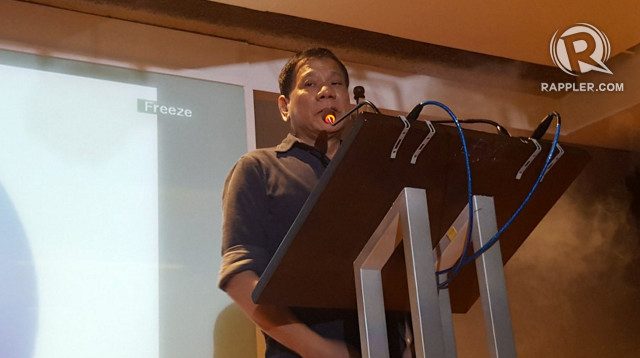 Facebook Twitter Copy URL
Copied
Duterte says cursing the Pope was a 'slip of the tongue,' and also challenges bishops to answer for sexual abuses of priests

MANILA, Philippines – After being slammed by the Catholic Bishops’ Conference of the Philippines (CBCP) for cursing Pope Francis, Rodrigo Duterte said he would withdraw if the body asks, but would challenge bishops to a debate about the Catholic church’s “sordid history.”

“You priests, you bishops, you condemn me. And you suggest that I withdraw and I will withdraw, but then I will start to open my mouth. There are so many secrets that children are hiding. This religion is not so sacred,” he told reporters during an ambush interview on Tuesday, December 1.

The Church, he said, should not be quick to judge him because the institution is also not spotless.

“Bakit yung mga pari na may kaso, may asawa, may anak, bakit hanggang ngayon hindi niyo ma-criticize ang sarili niyo?” he said, visibly distressed. (How come the priests with cases, those who are married, with children, how come you can’t criticize yourselves?)

Abused by a priest?

He even hinted that he himself endured abuse in the hands of a priest during his high school years at the Ateneo de Davao.

But he would not elaborate further.

Earlier, Rappler published stories about the sex abuse suffered by a former Ateneo de Zamboanga high school student in the hands of a Jesuit seminarian about 30 years ago.

His ‘way of talking’

Duterte lamented that the “small” issue of his cursing has been blown out of proportion.

“We strive to be idealist, prim and proper. There was a slip of the tongue, inadvertence. It was not intended to be that way,” he explained.

He previously told Rappler that the expletive used to refer to the Pope was an expression of his anger at the government for forcing the public to endure traffic jams during the Pope’s visit.

He also said that his generous use of curses is just his way of talking.

(I don’t know either. Because that’s what I’m used to. During the early years, I was in the squatter area. At least in our house, it was all ‘son of a bitch.’ When I wake up, ‘fuck this life.’ That’s a small matter.)

Does he regret what he did?

“Well, in a sense yes, because that’s how I really talk and priests, especially those in Davao, know about my mouth,” he said in a mix of English and Filipino.

“It really takes a lot to understand Mayor Duterte but if you see where he’s coming from – suffering of the people, miserable lives, people killing themselves because of ideology and religion – these are the things he wants to stop,” he told Rappler. – Rappler.com