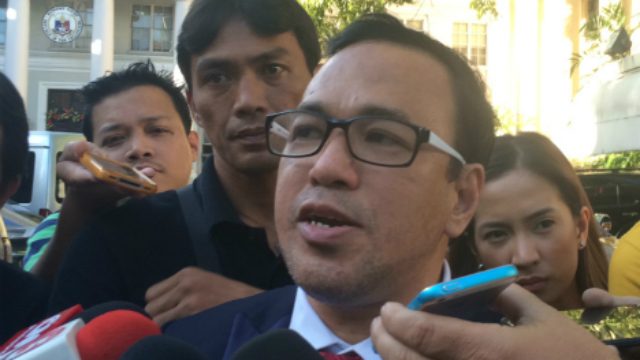 In a 74-page petition for certiorari filed past 3 pm Tuesday, December 8, David’s camp asked the high court to:

(What we want here is to block the enforcement or implementation of the wrong decision – with all due respect – by the Senate Electoral Tribunal.)

Carpio earlier said all 3 of them will inhibit from the case. But Luna said they expect the opinions of the 3 justices to “carry weight” now that the case is being elevated to the SC.

Luna cited in particular Carpio’s opinion that international laws cannot be applied automatically to confer natural-born citizenship to foundlings such as Poe. (READ: Why did SC justices vote to disqualify Grace Poe?)

“We [also] pinpointed that Senator Poe failed to register in the separate registry for foundlings and therefore, she is not entitled or cannot avail of the legal presumption of natural-born citizenship because she is an unregistered foundling,” he added. (READ: TIMELINE: Grace Poe’s citizenship, residency)

As for the 5 senators in the majority, Luna said they committed instances of “grave abuse of discretion or reversible errors” when they voted in favor of Poe.

“We believe that they have trespassed or went beyond the bounds of reasonableness and valid adjudication of a very important and Constitutional issue such as this which involves no less than the status of Senator Grace Poe,” Luna said.

Tuesday’s SC en banc session is the last one for 2015, but David’s camp said the high court has existing guidelines for urgent petitions that need immediate attention.

“We leave that up to the Honorable Court…. We believe that the matter is of extreme urgency and of utmost importance, considering Poe is a candidate for president and there are pending disqualification cases against her,” Luna noted. – Rappler.com