Debate vs Duterte? ‘Let’s do it now,’ says Roxas 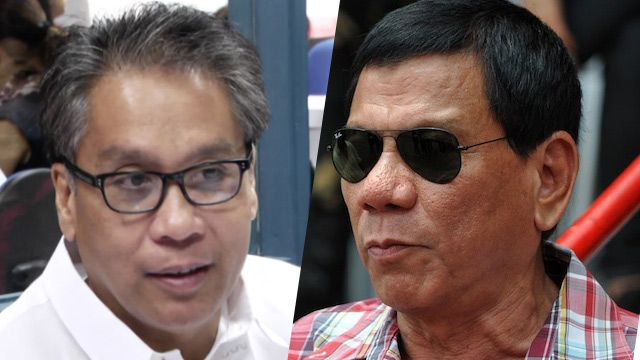 PAMPANGA, Philippines – Liberal Party (LP) standard-bearer Manuel Roxas II may have stopped himself from further engaging in a word war against Davao City Mayor Rodrigo Duterte, but he’s not backing down from a verbal tussle about their plans for the country.

“That’s good, now we can debate about where we want to take this country,” said Roxas in a chance interview on Friday, when asked to react to the decision of the Commission on Elections (Comelec) to accept the Davao mayor’s candidacy.

Asked further about Duterte’s statement that he was ready to debate with other presidential aspirants, Roxas said, laughing: “Hindi ko siya aatrasan.…Anytime. Ngayon na! Gawin na natin ngayon, mamaya magbabago na naman isip niya (I’m not backing down from him. We can do it anytime. Let’s do it now. Do it now, since he might change his mind again).”

It was an apparent reference to the months of denials and teasing some called the “Duterteserye” in the lead-up to his final decision to run for president. (READ: Rodrigo Duterte: Sorry, I will not run for president)

Roxas and Duterte, friends-turned-foes who are both seeking the highest post in the land, recently locked horns in a media back-and-forth that saw “myth” claims thrown around, slap threats, a fist-fight challenge, and finally, a gun duel dare.

It died down a week later after Roxas said they should just stick to “issues” because Filipinos deserve better.

The ruling party’s standard-bearer said his conflict with Duterte, based on the latter’s accusation that  he “lied” about his Wharton degree, surprised him.

(I was shocked. I was surprised because it’s so shallow. Especially because it’s true that I graduated from Wharton, right? I have classmates, schoolmates who are saying we studied there together. The issue’s really shallow, I think it’s better you ask him about it. Because for us, the biggest issue is where we intend to bring the country.)

There was a time when the two, who were members of Congress at the same time in the late 90s, were close not only politically but personally. Duterte even campaigned for Roxas in the latter’s losing bid for the vice presidency in 2010.

Roxas is campaigning on the promise of continuing the “Daang Matuwid (Straight Path),” the current administration’s so-called “philosophy of governance” that espouses anti-corruption, transparency, and good governance initiatives.

Critics say the economy and anti-corruption efforts are among the highlights of the Aquino government. The administration points to beneficiaries of government programs – the Pantawid Pamilyang Pilipino Program, PhilHealth, and bottom-up budgeting process – as proof that “Daang Matuwid” works.

Still, many score the administration for gaps in infrastructure, embodied by the worsening traffic in Metro Manila, and the continuing challenge of inclusive growth. Peace and order is also among the top concerns of the electorate, an issue which the tough-talking Duterte is said to be strong at.

Roxas’ survey numbers still leave much to be desired, although they’ve seen a bump since he was endorsed by Aquino. – Rappler.com