Dec 22, 2015 8:54 PM PHT
Facebook Twitter Copy URL
Copied
Poe's camp maintains she is still a presidential candidate and reiterates they will fight it out in the Supreme Court 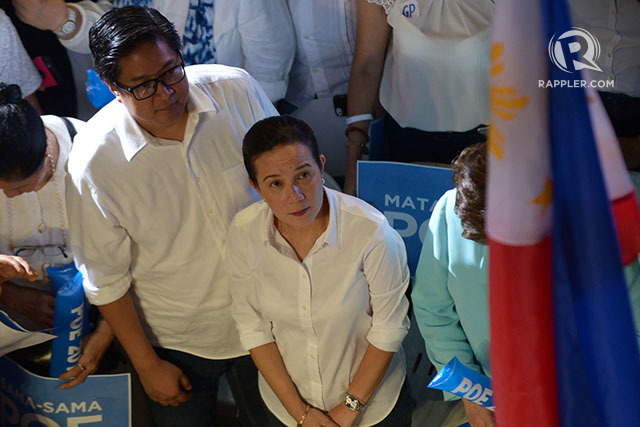 MANILA, Philippines (3rd UPDATE) – Three days before Christmas, the Commission on Elections voted to junk the two motions for reconsideration of presidential aspirant Senator Grace Poe involving her disqualification from next year’s polls.

Comelec chairman Andres Bautista said majority of the commissioners voted against Poe’s appeals. He did not give the results of the voting.

“It looks like that’s how it is,” Bautista told Rappler in a phone interview on Tuesday, December 22.

Baustista refused to give additional information, saying the decision would be promulgated tomorrow, December 23.

“It is best for the decision tomorrow, together with my separate opinion,” Bautista said.

Commissioner Rowena Guanzon said the poll body voted separately on the two cases. The first and second divisions of the Comelec ruled to disqualify Poe from the 2016 presidential race.

Guanzon said only Commissioner Christian Robert Lim inhibited from voting on the 2nd division appeal, as petitioner Estrella Elamparo was an associate in his former law firm.

Meanwhile, no one inhibited from voting on the 1st division case, which consolidated the petitions of former Senator Francisco “Kit” Tatad, professor Antonio Contreras, and University of the East Law Dean Amado Valdez.

“We have voted for the motion for reconsideration, bukas ho matatapos na siguro. We have all voted. Mas maganda tomorrow kasi bukas yung promulgation probably. We cannot naman disclose our vote but the public should be assured there is no delay. Kasi madami ang nagtatanong bakit ang tagal,” Guanzon said.

(We have voted for the motion for reconsideration, it will be done likely by tomorrow. We have all voted. It would be better tomorrow because the promulgation will likely be tomorrow. We cannot disclose our vote but the public should be assured there is no delay. Because many are asking why it’s taking long.)

Tatad and his lawyer Manuelito Luna said they were informed of the decision but have yet to receive details.

“This is really a validation of what we have said from the beginning. Duda especially motibo ng kliyente. We’re proceeding in right direction at walang personalan,” Luna told Rappler.

(This is really a validation of what we have said from the beginning. It was questionable, especially the client’s motivation. We’re proceeding in right direction at it’s nothing personal,” Luna told Rappler.

Poe, for her part, said was not surprised by the Comelec’s decision, as she earlier said she expects an unfavorable ruling from the poll body.

“I was not surprised with decision of the Comelec en banc. It was expected and I remain undaunted by it. I am a Filipino and qualified to offer myself as President of our country. The Comelec cannot change that much less deprive our people of their right to choose our next leader,” she said.

The camp of Poe also hit the leak of the decision, a day before its supposed promulgation.

Poe’s spokesman Rex Gatchalian said this is “disturbing” and “highly irregular,” urging the poll body to look into the “breach of protocols.”

“That being said the sinster minds behind this leak have one thing in mind – to sow confusion. In addition, if reports are to be believed the timing of the release of the supposed decision is also suspect. Why release the decision in haste when the holiday breaks are upon us. Is it meant to disadvantage Sen. Poe’s legal response???”

Guanzon said any candidate has only 5 days after promulgation of decision to secure a Temporary Restraining Order from the SC.

If he or she misses the deadline, Guanzon said, his or her name would be excluded from the ballot.

This means that if Poe wants to hurdle the legal battle at the High Court, she has to move quickly.

(If they don’t meet the deadline to get a TRO, they will not be on the ballot. I’m not speaking about any particular candidate, that’s just the rule. It’s better for the cases to go up to the Supreme Court.)

‘Poe is still running for the presidency’

The camp of Poe has yet to receive a copy of the decision but reiterated they will exhaust “all legal remedies.”

Poe earlier said she is not expecting a favorable decision from the Comelec en banc, as the fight is in the Supreme Court, the final arbiter of the law.

“I am hopeful and  confident that our magistrates, based on jurisprudence and precedents, will be objective and fair in their discernment of my case and, in the end, will let the Filipino people decide who our next president will be,” Poe said.

Until the high tribunal’s final ruling is out, Poe maintained she remains a candidate for president.

Even with the consecutive unfavorable decisions, Gatchalian maintained Poe is a natural-born Filipino who has met the 10-year residency requirement for a presidential candidate.

“We are very confident that in the end, the justices of the SC will see the merits of our position. At this point, the process has not taken its full course, hence Sen. Poe is still in the running for the Presidency and should be kept in the official list of candidates,” he added. – Rappler.com