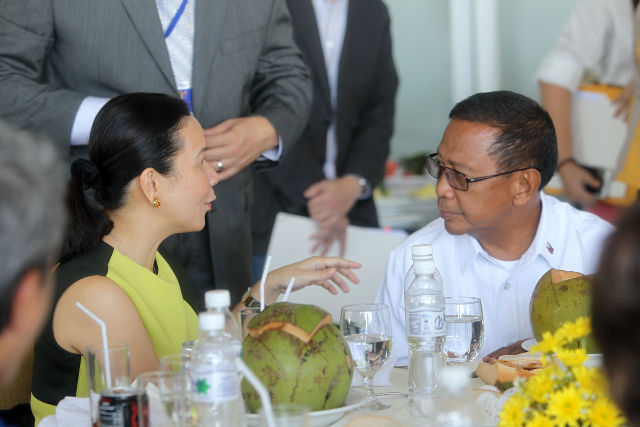 MANILA, Philippines (UPDATED) – Vice President Jejomar Binay and Senator Grace Poe are tied again in a new presidential poll conducted by the Social Weather Stations (SWS) conducted a week ago, showing erratic changes in the ranking of the leading candidates.

Binay and Poe were each chosen by 26% of 1,200 respondents polled from December 12-14, according to a report published by BusinessWorld.

The other candidates are close behind. Administration candidate Manuel Roxas II was chosen by 22% and Davao City Mayor Rodrigo Duterte by 20%.

It is Senator Miriam Santiago who is lagging behind with only 4% of the respondents saying they will vote for her.

The survey has 3 points error margin.

In a statement, Poe said: “I accept with gratitude and humility the latest SWS survey results.  I will continue to make the rounds all over the country, reach out to the people on the ground, and make known how the leadership we are offering would make the government genuinely work for them.”

The Pulse survey has captured initial reactions to the decisions of separate Commission on Elections divisions to cancel the candidacy of Poe, a ruling that she appealed but were junked by the Comelec en banc on Tuesday, December 22.

Another survey by pollster Junie Laylo about the same time that Pulse Asia conducted its field work showed a different story. Poe led the race with 28% of respondents saying they will vote for her. Binay and Roxas were close behind with 23% and 22% of respondents choosing them, respectively.

The new SWS survey also shows that Senator Francis Escudero has kept his lead in the vice presidential race with 30% of respondents saying they will vote for him.

Administration candidate Leni Robredo has caught up with her rivals, however. She is tied with Senator Ferdinand Marcos Jr, who like her was chosen by 19% of the respondents, based on the SWS survey.

Senator Alan Cayetano was chosen by 17% of the respondents; and Senator Gregorio Honasan, by 8%.

The ealier Pulse Asia survey showed a tighter race among the vice presidential candidates. – with reports from Carmela Fonbuena/Rappler.com