Dec 24, 2015 10:00 PM PHT
Camille Elemia
Facebook Twitter Copy URL
Copied
All commissioners rule that Poe is not a natural-born Filipino citizen, contrary to the decision of the Senate Electoral Tribunal on a separate case 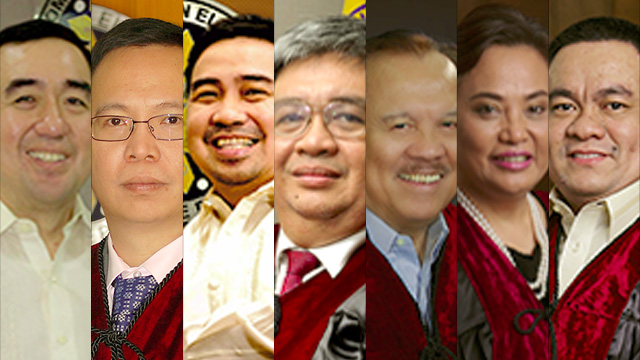 MANILA, Philippines – The poll commissioners have spoken – for the Commission on Elections (Comelec) en banc, presidential aspirant Grace Poe is not a natural-born Filipino and is not eligible to run for president in 2016.

Voting 5-2 on the First Division case and 5-1 on the Second Division case, the en banc cancelled Poe’s certificate of candidacy for president just before the holidays.

While there were 2 dissenters – Chairman Andres Bautista and Commissioner Christian Robert Lim – this does not automatically mean they agree that Poe is a natural-born Filipino.

In fact, when it comes to her citizenship, all 7 members of the en banc voted against Poe’s position that she holds a natural-born status as a Filipino citizen.

It’s because citizenship is just one part of the 5 issues they had to settle involving the disqualification cases against the senator. They tackled:

Under the 1987 Constitution, natural-born citizens are those “who are citizens of the Philippines from birth without having to perform any act to acquire or perfect their Philippine citizenship.”

Bautista, in his separate opinion on the First Division ruling against Poe, said the mere fact that Poe regained her Philippine citizenship via Republic Act Number 9225 or the Citizenship Retention and Re-acquisition Act, it means she had to perform an act to re-acquire it. (READ: FULL TEXT: Comelec chief’s separate opinion on 1st div ruling vs Poe)

“Given the foregoing, there can only be one interpretation of Republic Act 9225 that will do justice to the constitutional requirements for natural-born citizenship: a former Filipino who reacquired Philippine citizenship should be deemed to be a naturalized Filipino citizen,” the chairman said in his separate opinion.

But why did Bautista vote against Poe’s disqualification if he believes she is not natural-born?

Baustista explained that he does not believe Poe intentionally misled the public when she indicated in her COC that she is a natural-born Filipino and that she had complied with the 10-year residency requirement for a presidential candidate.

“Accordingly, while I find that the statements of Respondent as obtained in her 2016 COC regarding citizenship and residency are false, I do not believe that…there was a deliberate intent on Respondent’s part to mislead, misinform or hid a fact which would otherwise render a candidate ineligible. Hence, I vote to dismiss the Petition,” he said in his 53-page separate opinion on the Second Division case.

How the Comelec voted

The Comelec en banc settled 5 issues that were raised in 2 disqualification cases against the presidential race front runner.

As chairman, Bautista is the only one not belonging to a division. This means his vote, until the last minute, remained unknown to the public.

Some commissioners are accused of being allies of the administration, as they were appointed by President Benigno Aquino III, and some of them with links to Aquino’s presidential bet Manuel Roxas II of the Liberal Party, Poe’s opponent in next year’s presidential elections. (READ: Poe hints Roxas, Binay behind disqualification cases vs her)

Find out how each of them voted on the 5 issues: 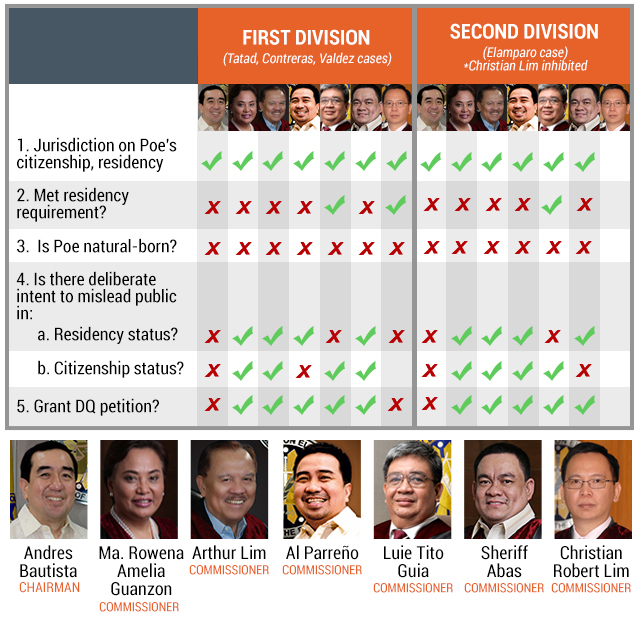 In the final vote on whether to ultimately cancel Poe’s certificate of candidacy, no commissioner changed his or her previous decision. Bautista, in the end, voted in favor of Poe together with Christian Lim.

Lim, who earlier voted against the cancellation at the division level, retained his vote.  He, however, opted to inhibit himself from the en banc decision on the Second Division case, as Elamparo was an associate at his former law office. (READ: Comelec commissioner explains vote in favor of Grace Poe)

While Guia’s final vote stayed the same, he changed his mind only on Poe’s residency, saying that Poe’s appeal made him re-evaluate his position. He now said Poe met the 10-year requirement for a presidential candidate.

“After said re-examination, I find that indeed Respondent can be considered to have effectively transferred domicile from the US to the Philippines as of May 2005,” Guia said in his separate opinion on the en banc decision on the First Division case.

Citing jurisprudence, he added citizenship and residency should be treated separately, as what Poe argues.

“One can be a permanent resident of a country even when he or she is a foreign citizen. Re-acquisition of former citizenship is not a condition for one to be deemed to have re-established his/her domicile in the country,” he added.

Following this decision, Guia also voted in favor of Poe when he said Poe did not intentionally mislead the public on her residency status. Bautista shared the same view.

For citizenship, Al Parreño maintained his decision in the Second Division level that ruled Poe did not deliberately deceive the public. The Second Division earlier said Poe as a foudling just naturally believed she was a natural-born Filipino, without intention to misinform the people. Bautista also shared the same opinion that there was no intent to deceive.

Christian Lim, for his part, refused to vote with the en banc on whether Poe intentionally deceived the public on her citizenship status. He earlier claimed the 3 consolidated cases lacked merit and should have been dismissed early on for technical issues.

Guanzon, Abbas, and Arthur Lim remained steadfast in their votes against the neophyte senator. – Rappler.com