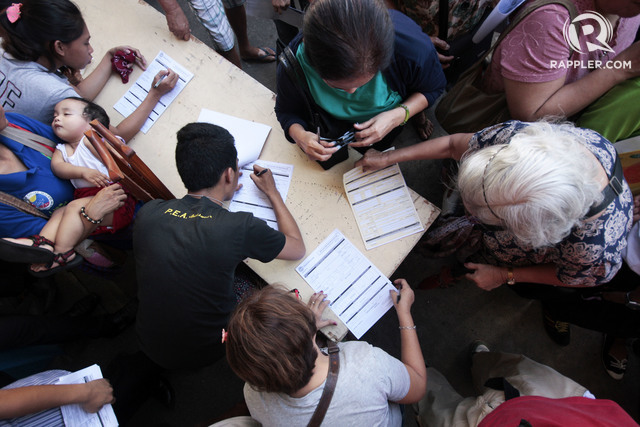 MANILA, Philippines (UPDATED) – Over 54 million Filipinos have signed up to vote in the 2016 national and local elections on May 9.

According to the final report of the Commission on Elections (Comelec), there are 54,363,844 registered voters nationwide for the 2016 polls.

This does not include yet the 1,376,067 registered overseas Filipino voters (OFV).

Also not included in the 2016 totals are the estimated 2.5 million voters whose records have been deactivated due to non-compliance with the Comelec’s “No Bio, No Boto” (no biometrics, no vote) policy.

Under Republic Act 10367, a voter needs to have his or her biometrics taken before he or she can vote in the May 2016 elections and in succeeding polls. The Comelec explained that this is meant to cleanse the voters’ list.

Leftist group leaders, including Kabataan party-list representative Terry Ridon, filed a petition before the Supreme Court in late November, arguing that the “No Bio, No Boto” policy is unconstitutional.

But in December, the Supreme Court dismissed their petition for lack of merit.

The Comelec later noted that the voters with incomplete or corrupted biometrics data can still vote in May. Only those completely without biometrics data will not be able to vote, due to the deactivation of their voter records.

Meanwhile, the Comelec has increased the number of clustered precincts for 2016.

There will be a total of 92,509 clustered precincts on May 9, based on the poll body’s latest project of precincts.

Comelec spokesperson James Jimenez said this is because the number of voters per precinct was reduced to 800.

Editor’s Note: This article has been updated to reflect the correct number of registered voters, after the Comelec resolved some discrepancies in the December 2015 report that Rappler had obtained.