Foundlings not natural-born? ‘A step backward’ for children’s rights Facebook Twitter Copy URL
Copied
Amid the citizenship issues faced by presidential candidate Grace Poe, advocates for children's rights gather to discuss the implications of declaring foundlings like her as stateless

MANILA, Philippines – At the core of the disqualification cases filed against Grace Poe as senator and presidential candidate is the question of whether foundlings like her are natural-born citizens of the Philippines.

Five out of 9 members of the Senate Electoral Tribunal (SET) said Poe is a natural-born Filipino, while all 7 members of the Commission on Election (Comelec) en banc said she is not.

For advocates of children’s rights, pronouncements on Poe’s citizenship made by Comelec commissioners and the Supreme Court (SC) justices who dissented in the SET decision are not only “absurd, illogical, and unreasonable” – they also threaten progress that has been achieved in advancing children’s rights in the country.

“It’s back to the Dark Ages, when you say foundlings are stateless,” Noel del Prado, lawyer and board member of non-governmental organization Child Justice League, told Rappler on Tuesday, January 5.

The NGO hosted the Adoptees, Adoptive Families and Foundling Conference on Tuesday afternoon, bringing together lawyers, adoptive families, social workers, women’s groups, and representatives from child-caring agencies to discuss the state of foundlings in the country.

Del Prado and Child Justice League founder Eric Mallonga had previously worked with Poe: the former said he was Poe’s chief of staff during the 2013 senatorial elections, while the latter said Poe is a friend and his former boss at the Movie and Television Review and Classification Board.

Their organization also spearheaded the “In Defense of the Foundling” newspaper advertisement that came out in November 2015. But the two clarified that their fight for foundlings goes beyond the senator and her bid for higher office.

“Kulang pa nga ginagawa natin, tapos (We still have a lot more to do, then) now you’re saying we take a step back several hundred years?” del Prado said.

He was referring to SC Associate Justice Arturo Brion, who said in his dissenting opinion on the SET case that Poe “cannot be a Philippine citizen” since she has not met any of the conditions under Article IV, Section 1 of the 1935 Constitution. 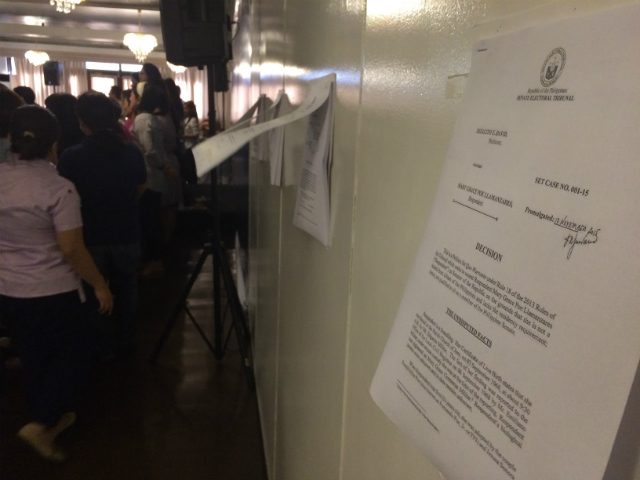 During Tuesday’s conference, Child Justice League founder Mallonga, a lawyer, echoed the SET majority in saying it was not the intention of the framers of the 1935 Constitution to discriminate against foundlings.

“We stress, our Constitution clearly provides that natural-born citizens are persons who do not have to perform any act to acquire or perfect citizenship. This definition encompasses foundlings, who have been legally presumed throughout the history of this nation as natural-born citizens,” he said.

He also raised his concerns on the implications of declaring foundlings as stateless: they can’t, for instance, enter the police force, be public servants, or even study at the Philippine Science High School.

In an interview with Rappler after the conference, Mallonga explained: “Now, children who are foundlings cannot be adopted because according to one of the justices in the Senate Electoral Tribunal, they are stateless, and therefore they should be deported. So in other words, they cannot be adopted because the DSWD has no right whatsoever to declare them legally available for adoption.”

“I’m not really here to push [for] the candidacy of Senator Grace Poe. I’m here to push for the rights of foundlings because there is already substantial, not just collateral, damage to the rights of [children who are] foundlings,” said Mallonga, who also runs an orphanage for abandoned, neglected, orphaned, and abused children.

Del Prado agreed: “This is larger than Grace Poe, larger than just a mere election issue. This involves the lives of the children, and if you work with these children, you will see their lifelong struggles. It doesn’t end with them being adopted. It’s a lifelong journey: even as professionals, even as adults, they deal with a lot of baggage and stress of not knowing who their parents are.”

Before the conference ended Tuesday, Mallonga urged other groups present to join their plan to march from Comelec to the SC to express their disappointment and to defend foundlings in the country.

“There seems to be no outcry in the past few months, and we have only been in the sidelines. Now we want our voices to be heard,” he said.

The High Court will hear oral arguments on the SET case and the Comelec cases on January 19. – Rappler.com