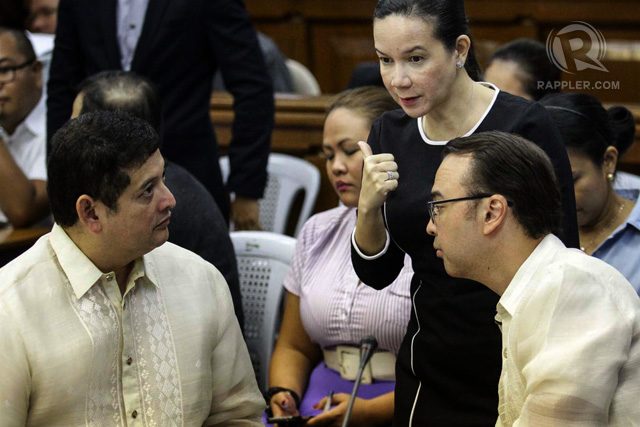 MANILA, Philippines – Should senators seeking a post in 2016 inhibit themselves when the probe into a controversial police operation resumes?

For the spokesman of the ruling coalition, they should stay away from what will likely be a highly-charged probe “to avoid any semblance of impropriety.”

Earlier this week, the Senate announced it would be re-opening its probe into “Oplan Exodus” because Senator Juan Ponce Enrile has personal knowledge and supposedly has “new evidence.” (READ: SAF 44 used for politics? That’s for public to say – PNP)

(It’s respect for the principle of delicadeza. I don’t think it’ll look good if they grandstand there. Let the other senators not seeking a post in 2016, those who don’t need to project to the public, stand up and ask about this issue. Just so there’ll be no doubt that the probe was re-opened for political purposes.)

Exodus is a top-secret police operation that saw close to 400 troopers from the Philippine National Police (PNP) Special Action Force (SAF) enter Mamasapano town in Maguindanao to eliminate terrorists wanted by both the Philippines and the United States. (READ: LP’s Erice on Mamasapano probe: Tool vs Aquino, Roxas)

The Senate’s re-opening of the case is set on January 25, exactly a year after the bloody operation.

The ruling party and Aquino himself have questioned the motives of senators, given the proximity of the probe to the campaign period.

The SAF chief who headed the operation, retired police director Getulio Napeñas, is a senatorial candidate of opposition standard-bearer Vice President Jejomar Binay’s party. The ruling Liberal Party (LP)’s standard bearer Manuel Roxas II was interior chief and head of the National Police Commission when the operation took place but was kept out of the loop.

Gutierrez commended Poe for saying she would make an effort to keep politics out of the probe, but said she should take this one step further by inhibiting outright.

Gutierrez added that Roxas will make it a point to attend the probe, should he be summoned by the Senate. – Rappler.com